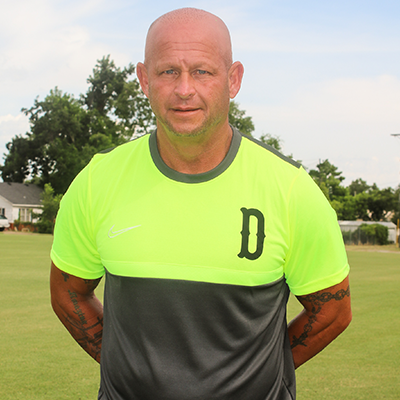 Set to begin his 20th season as the head coach of Science & Arts men’s and women’s soccer teams, Jimmy Hampton has assembled a model program since Science & Arts hired him to begin the two soccer programs in 1998. Since then he has built respected teams that are both nationally-competitive and one that is respected by coaches and university administrators across the region.

Hampton has won 459 games at Science & Arts compiling a winning percentage of better than 65 percent. Currently, he is ranked as the 11th winningest active men’s coach with 260 wins and the 12th winningest active women’s coach with 199 wins. Hampton has been selected as the Sooner Athletic Conference or National Soccer Coaches Association American Southwest Region Coach six different times. All total, Hampton has coached 127 all-conference players, 41 NAIA Scholar Athletes and 28 NAIA All-Americans in his 19 years.

Before becoming Science & Arts’s first soccer head coach, Hampton spent 10 seasons building championship-caliber teams at Chickasha High School. Before that, he coached three seasons at Tulsa Memorial. Since 1994, Hampton and the Fightin’ Chicks collected five state 5A championships. His boys teams won back-to-back state championships in 1995-96, one in 1999 and another in 2002, while his girls won the 1998 crown.

In his 10 years at CHS, Hampton won nearly 90 percent of his games, and he ranks as one of the all-time winningest soccer coaches in Oklahoma prep history. He is one of the few soccer coaches in the southwest to obtain a national “A” coaching license from the United States Soccer Federation which is a credit the the quality of his coaching ability and techniques.