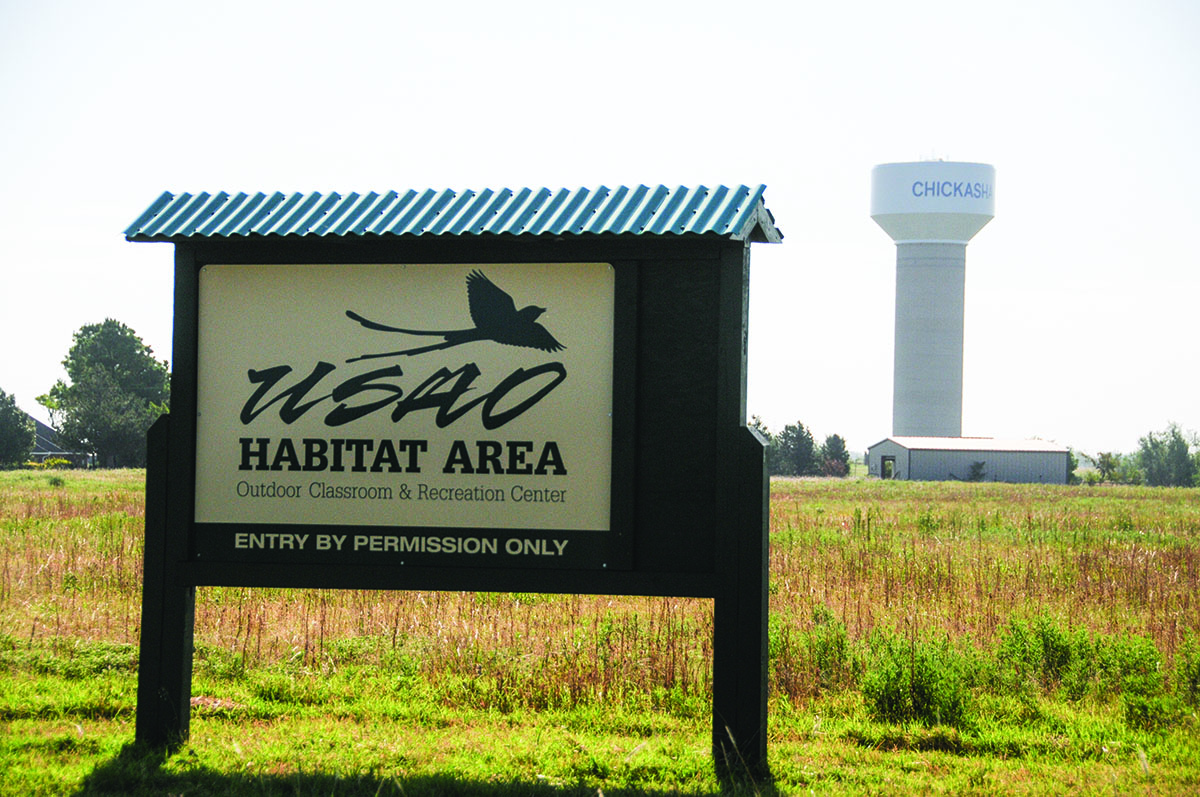 New signage marks the entrance to the USAO Habitat Area, which has been recently overhauled to better serve the campus and community’s educational needs. More information about public programs using the Habitat can be obtained by calling 574-1313.

It is a place that has been many things to many people.

The Lodge. The Campus Farm. The original site donated for what would become the Oklahoma College for Women.More recently though, it been transformed by the hard work of a number of USAO professors, students and organizations along with the generosity of alumni into something brand new— the USAO Habitat Area.
“I’ve been wanting to do this for 30 years,” said Dr. Darryel Reigh, professor of chemistry. “But sometimes, you just have to wait for the right combination of factors to come together in order for something big like this to start moving forward.”
“Now, it has and I couldn’t be more pleased.”For the last 30 years, the 140-acre property, located a mile or so west of 29th street on Idaho Avenue, has been leased for cattle grazing.The land was originally deeded over to the university in 1909 by H.C. Cloud as a future site for the Oklahoma Industrial Institute and College for Girls (OIICG), though another location was ultimately chosen, according to the USAO Presidential Archives.
When the most recent grazing lease expired in February, a consensus emerged that it was time for the property to do more than just generate a small source of revenue for the university.The resulting plan is ambitious— part reclamation, part transformation and part imagination.
“Our first priority is to try and re-establish natural grasses on the land,"  Reigh said.“Right now, we’ve got a lot of Johnson and Bermuda grasses out here. Through a variety of means—controlled mowing, selective removal of certain species— we’re trying to create a space for native grasses like bluestem and Indian switchgrass to thrive.”
While the feel of the prairie is never too far removed as one walks along the two trails that wind around the twin ponds, the trees contribute greatly to the sense of being part of a habitat.Dr. Nancy Osborn, professor of physical education, spearheads USAO’s Tree Campus USA efforts and has had a hand in bringing new tree life to the habitat.
“There have been several rounds of plantings,” Osborn said. “We tried to get a good mix of hard and soft wood trees as well as fruit trees, mostly around the pond areas.”
Staff, faculty and students have been engaged in the tree planting process.In all, more than 2500 saplings were planted including wild plum, pecan, mulberry, choke cherry, indian currant, post oak and blackjack oak.
Reigh hopes that the mix of trees will provide wildlife on the property with food as well as cover. Species observed on the property include deer, turkey, raccoons, opossum, armadillos as well as a variety of birds like cardinals, scissor-tails, meadowlarks and blue birds.
Students have already benefitted from this wealth of local fauna by conducting turtle and mammal surveys in the habitat.
The habitat is not the only feature of the property to receive a face-lift. The lodge, a one-room building located in the heart of the habitat, is being converted into an outdoor classroom.In addition to being re-painted and having doors and shutters replaced, the building was given a new roof through a generous donation from OCLA alumni. A new concrete patio was poured and small picnic tables were added, creating an attractive exterior to the outdoor classroom.
Classes have already been held on the property since its rebirth but Reigh says that they are only the first step.“Eventually, we hope to host public education programs, especially for grade school students,” Reigh said.
“We’re going to build exhibits in this classroom that show off the plants and animals that make up this habitat and explain the work that we did to try and return it to a more natural state.”
Other future plans include wildflower plantings, the development of a marsh area between the two ponds and organized fishing activities.
With so much to offer campus and community alike, the USAO Habitat Area is poised to remain an important part of the university’s legacy for years to come.
Share Story on Social Media