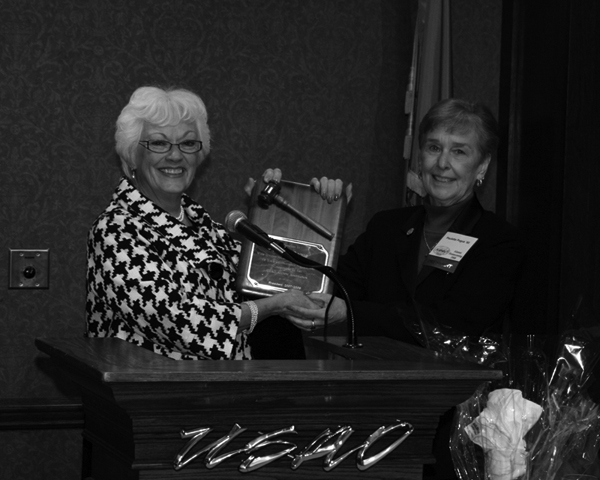 Incoming Alumni President Judy Ford of Shawnee, (left) class of 1963, presents a plaque to honor Paulette Pogue of Tulsa, who has served as president of the USAO Alumni Association for the past two years. Pogue is a 1960 graduate of OCW. During her tenure, alumni tackled the Stevens Alumni House project, raised nearly $300,000 to remodel it, and dedicated it in a ceremony Nov. 8.

Many hugs, stories of days gone by and symbols of progress and a bright future dominated the campus of the University of Science and Arts as alumni returned for their annual Homecoming Nov. 7-9.

Reviews of the weekend were positive. “It was a wonderful reunion. I’m impressed with the Stevens Alumni House. It was so good to see so many people there,” said Peggy Whitton, a 1949 graduate from Oklahoma City.

“What a great reunion it was. I have been coming for most of 49 years and it was the very best ever,” said Helen Bolton, a USAO Alumni Board member and a 1959 graduate from Bixby.

The formal weekend activities started with the annual Green and Gold Scholarship Buffet Nov. 7. During the buffet, 73 scholarships were presented to 66 USAO students. The scholarships are established by alumni and friends to honor the university and to provide assistance for USAO students. More than $60,000 in scholarships for the academic year were awarded.

Saturday’s events began early with the dedication of the Steven’s Alumni House at the university. Restoration of the house has been underway since last year. The house will provide new space for the Alumni Development office, as well as meeting rooms and overnight accommodations for alumni guests. More than $300,000 has been raised for the project from donations, a donor brick program, as well as silent and live auctions during the Homecoming weekend. The structure was used in the 1930s and 40s as a home economics laboratory. Angie Burruss, a 1993 graduate, served as chair of the Stevens Alumni House Committee.

The Alumni Association Executive Board was also installed during the luncheon. Judy Ford, a 1963 graduate, was installed as president for the 2009-2011 term. Several members of the Stevens Alumni House Committee were srecognized during the event. More than 220 alums and guests attended the banquet.

Saturday’s activities concluded with the President’s Reception hosted by USAO President Dr. John Feaver and his wife, Marilyn, in the newly renovated President’s Home and a concert featuring the Lee Shaw Jazz Trio. Lee Shaw, a 1947 OCW music graduate and a member of the Oklahoma Jazz Hall of Fame and the USAO Alumni Hall of Fame, performed a free evening concert as part of the university’s 100th celebration.