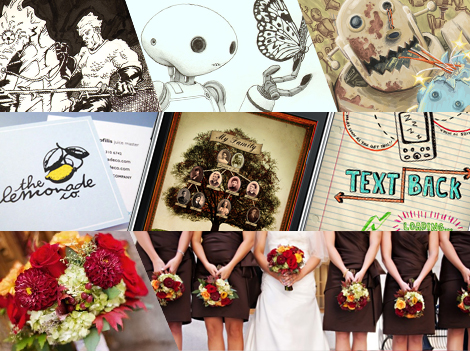 USAO Alumni Jerry Bennett, Ali Crouch and Lindi Collins (work pictured above) return to campus on Friday to share their experiences as working artists with students in the USAO art department. They will speak from 3 until 5 p.m. in Davis 124 on Friday.

Alumni Jerry Bennett, Ali Crouch and Lindi Collins will return to the University of Science and Arts on Friday to speak to students about their art and their careers for the 3rd annual Career Lecture Series.

Jerry Bennett graduated from USAO in 1993 with a bachelor’s degree in art with an emphasis on illustration. Initially finding an outlet for his professional creativity working on murals and portraits, Bennett has come into his own in the past few years with higher profile gigs illustrating young adult books like Ryan and Anna McKinley’s The Pirate Bride (2010) and I Walk for Water by Lindsey Andrew.

Of late, Bennett has found a new niche in creating shirt designs steeped in pop culture references and is in the development stage of writing and illustrating his own graphic novels.

“The digital age had arrived about a semester AFTER I graduated. Considering I am almost exclusively a digital artist now, that's saying something.”

Ali Crouch finished up her bachelor of fine arts at USAO in 2009 and left immediately for the Vancouver Film School where she studied classical animation.  Crouch was profiled by Stuffed Magazine twice in 2010. Upon graduation from VFS, she was hired by American Education Corporation as a flash designer.

Presently, she is working for AEC and building up her presence online, while continuing to contribute to websites and magazines as opportunities arise.

Combining a long-held interest in floral design with her studies at USAO, Collins launched The Bridal Garden in 2002. Since, she has overseen the floral arrangements at more than 200 weddings with demand increasing with each passing year.

Despite her successes as a floral arranger, Collins has also found time to design logos for a number of Tulsa-area businesses.

The Lecture is open and free to all USAO students and is sponsored by the Art Department and the Cultural & Recreation Committee.