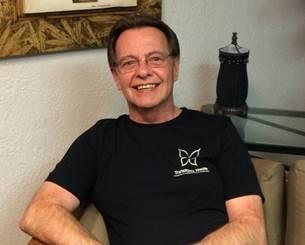 By 11 years old, Steve Boyer had already survived two major traumatic events. With his and his family’s lives threatened, he retreated inside of himself, not speaking to a single other person about his pain and his struggles with thoughts and emotions he had never known before. He considers this the start of his journey through mental illness and substance abuse.

At 12, Boyer found that substances could mute the mental and emotional suffering that those traumas caused and by the following year he regularly used a variety of illicit substances. Self-medicating in this way helped temporarily, but he found himself needing more and more to numb the pain as time went on and soon became dependent on these substances to function.

“For 48 years I was experiencing depression, anxiety, PTSD, racing thoughts, low self-esteem, etc., and the only way I could make it through was by using substances,” said Boyer. “I could not handle any thoughts, feelings or emotions on my own.”

Boyer started his college career like many other 18-year-olds but continued going down the same dark path of substance abuse, spending his time partying and dropping out shortly after. He later tried again, with much the same results.

Due to his addictions, Boyer started to lose friends, family and jobs. Trapped in a dark spiral of self-hatred, he often felt that life was not worth living and ended up in and out of hospitals, due to suicide attempts, or jail, due to driving under the influence.

“I was just a person who did not care about anyone else but myself,” said Boyer. “And because of that I emotionally hurt a lot of people and hurt my community.”

In 1988, at age 32, Boyer made a deal with his grandmother: if he worked on getting clean and finishing college, he could live at her house, which backed right up to USAO’s Stevens Alumni Chapel. This time, Boyer became very involved on campus, maintaining a 4.0 GPA and double majoring in business administration and communications. He credits Dr. Rosemary Smith in the Communications Department with getting him involved in plays and public speaking, pushing him outside his comfort zone and expanding his abilities beyond the business world.

“The education I got at USAO is the best thing that ever happened to me,” said Boyer. “I loved being on campus and USAO gave me the financial resources to be successful. They gave me the knowledge I needed once I was ready to recover.”

After graduation, Boyer’s mental health again took a dark turn, and, despite landing a good job, he lost it quickly due to his substance abuse. His fourth suicide attempt came in November 2007, and he was admitted to Griffin Memorial Hospital in Norman. This time, he was ready, willing and able to make the change he knew he desperately needed but had no clue how to do so.

Griffin’s doctors and other staff worked closely with Boyer, giving him tools to cope with the various symptoms that he battled for so long. In addition to finding the proper medication for his condition, the staff extended him a caring and compassionate hand that helped to repair years of dismal self-esteem.

“In my last 10 years before coming to Griffin Memorial Hospital I could not hold a job for over one year before being fired for being under the influence. I had become a burden on family, friends and society as a whole,” said Boyer. “They saved and changed my life!”

After leaving Griffin Memorial Hospital Boyer immediately went into another facility, NADTC, for Substance Abuse treatment where he stayed for 10 weeks to help him recover from his addictions. When he finished the program there, he immediately when into the Transition House—where he would spend 14 months continuing his healing journey and become deeply involved in 12-step programs and other mental health support services. The staff spent countless hours further developing his resilience and preparing him for the struggles he would continue to face in recovery. A residential program, Transition House taught Boyer how to take care of himself and live with other people while maintaining his independence. Boyer said that the Transition House continued to save and change his life.

The help that Boyer received at both Griffin Memorial and Transition House made him realize how much he wanted to help others learn through his own experiences. After graduating from Transition House, he found a job at the Children’s Recovery Center. Unfortunately, Boyer soon found himself laid off when major budget cuts in 2009 forced mental fealth facilities in Oklahoma to downsize.

But just four months later, in March 2010, Griffin Memorial hired him and he will soon be celebrating a decade of service to that important institution. He works with consumers with mental health and substance abuse issues, particularly people new to recovery, to develop ways they can effectively piece their lives back together.

“The communication skills that I gained at USAO are a huge part of my expertise,” said Boyer. “I want to give back since I got so much from there. Life happens and we get different opportunities. USAO planted the seeds that grew once I was ready.”

Today, Boyer is a certified-peer recovery support specialist and works as Griffin’s Recovery and Empowerment Specialist. This position allows him to use his own story, with its many ups and downs, to connect with others struggling with all forms of mental illness and substance abuse issues, showing them that change is always possible and their life needs not be reduced to their worst, most painful moments.

“Today, I am able to pass on to persons new in their recovery the tools that were provided to me,” said Boyer. “I can give back what people gave me in my recovery. I am able to share my experience, strength and hope with others.”

Finding enormous fulfillment serving others in this way, Boyer plans to continue improving his skills, constantly learning how to communicate better and more finely tune his efforts. Also a tireless advocate, Boyer is always open, when asked, to help advocate for improved services and increased funding for those that need help with mental health and substance abuse issues in our state.

“Due to his experiences and struggles, Steve has a profound understanding of despair and anguish,” said JP Audas, USAO’s director of development. “As a result of this pain, he is uniquely suited to help others through addiction and mental health issues. In this way, he is able to use his darkest experiences to bring light and hope to others.”

Boyer says he owes his life to the Oklahoma Department of Mental Health and Substance Abuse Service, whose affiliates mentioned above saved, changed and gave him a new life.

On Nov. 29 this year, Boyer will celebrate 12 successful years on his journey of recovery.