Alums Reach Out to Toddler with Cancer 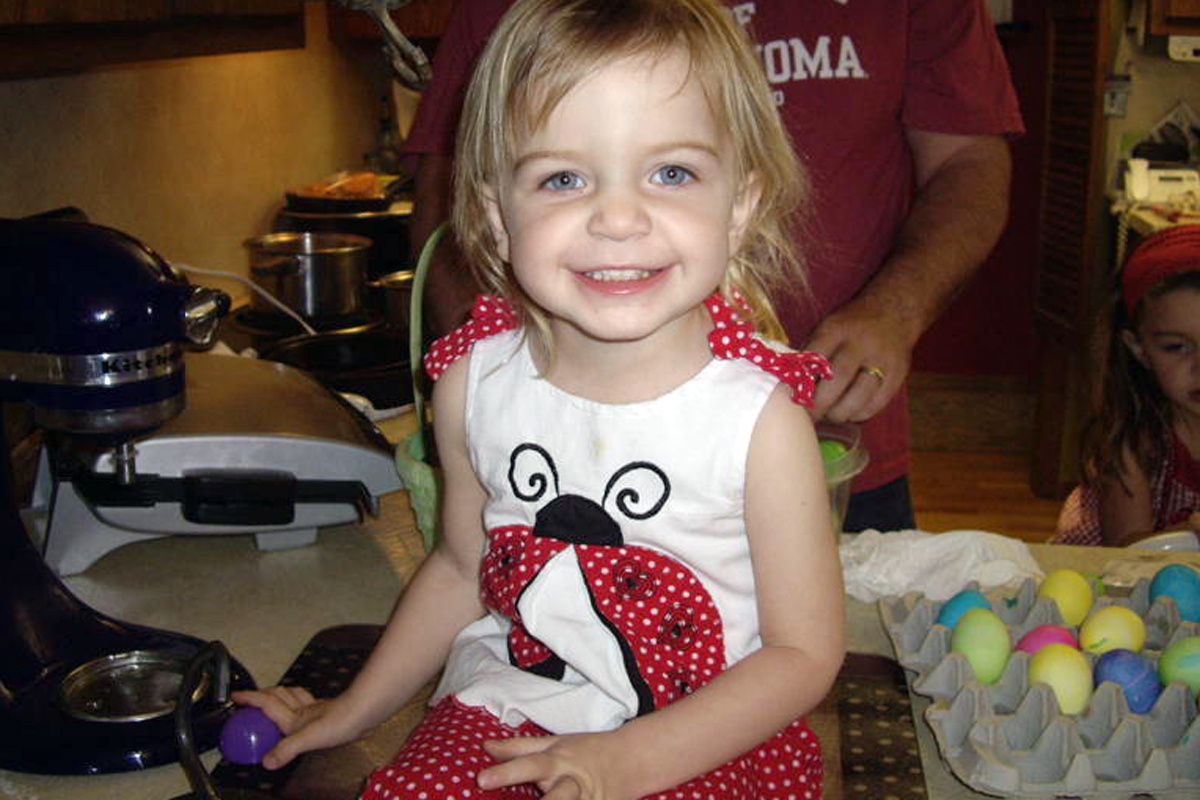 Two-year-old Audri Kate King was diagnosed with an aggressive, rare form of children’s cancer on April 15. Her family, full of USAO alumni, has set up a number of fundraisers for the young girl. She is featured at www.LadyBugHugs.org.

On Easter Sunday, a relatively healthy 2-year-old Chickasha girl was taken to the hospital after complaining about back pain.

A week-and-a-half and numerous tests later, the medical staff at the Children’s Hospital in Oklahoma City diagnosed the toddler with a rare form of children’s cancer.

Audri Kate King, 2, is the daughter of USAO student Janae King and graduate Brandon King, of Chickasha. She has embryonic rhabdomyosarcoma cancer and has numerous tumors extending from her neck and shoulders down her spine and around her lungs, said her grandmother, Marla Langford, of Alex.

The treatment and chemotherapy for the cancer will be aggressive, but so has the fundraising for the young child and her family. Shortly after the girl’s diagnosis, the family set up a fundraising website and few events to help raise money for the family.

The family hopes to raise enough money to support medical bills, groceries, housing and toys for Audri, her older sister, Brooke, and a sister who is due in July. Audri has been asking for her mother almost constantly, Langford said, so Janae King won’t be able to work.

“It is our hope that even after Audri beats the cancer and returns home, other families, hospitals and charities can receive assistance from this site,” Audri’s website states.

Fundraising events include a bake sale at Walmart, an Indian Taco Dinner at Alex schools and a t-shirt sale and head-shaving event in Norman, family members said.

Audri’s uncle and USAO alum Daniel Byard will be one of the first to be shaved, he said.

“It’s obviously pretty tough. It’s sad when anyone gets cancer, but it’s certainly worse when a kid gets cancer,” he said. “These events and website are really special to me.”

Byard said Audri spent a few days with intense chemotherapy. She has been released to begin outpatient chemo for a few weeks. Following that, she’ll return for a five-day hospital treatment. The same regimen will continue for a year.

Janae King said it has been difficult to remain strong and positive through the whole experience, especially because she has limited time for her daughter because she’s six months pregnant. The excretions from the chemotherapy can be dangerous to her and her unborn child.

Audri has been tough-minded over the last few weeks, Byard said, but it’s been hard because the toddler doesn’t know how sick she is.

“She really doesn’t understand what’s going on,” he said. “It could be good or bad, just because she doesn’t know what she’s fighting, but we’re all fighting for her and with her.”

King said the young girl has developed a coping mechanism for dealing with the doctors and nurses, of whom she is now scared.

“She’s put up a wall,” King said. “She’s scared to death, I think, because she has to take some many medicines now.”

The cancer has a 50 percent success rate, Langford said. It affects about 350 people — mostly children — each year.

“We’re a very strong Christian family and our faith is keeping us strong,” Langford said. “We know God will get us through this.”

Family members have set up a Facebook page for Audri. People from all over the world have turned out with encouraging words and prayer for the family.

“It’s so uplifting to know that there’s so many people praying for her,” Langford said.

King said the family is constantly hearing from friends and family who want to help.

“(We have) more (support) than we can imagine. We have so many people sending letters and coming by bringing food,” she said. “I appreciate what everyone is doing. We wouldn’t be able to do it without everybody helping us.”

Audri’s grandmother described the 2 year old as a very beautiful and active youngster. While she enjoys being a younger sister, she is excited about the birth of her younger sister in July.

“She wanted to do everything her older sister did. There were no limits,” Langford explained.“She’s tough, so hopefully the Lord will provide her with the strength to get through this battle.”

King spent every second at Audri’s side in the hospital and over the last few weeks and was not able to finish school this semester as result. She said she hopes to return sometime, but it won’t be until next spring at the earliest.

For more information about Audri and how to help, visit her website at www.LadyBugHugs.org. The website houses information on upcoming events and readers can donate money directly on the site. Donations can also be made at any BancFirst location or at any of Chickasha’s First National Bank branches.

“I really just want to thank everybody for their support and what they’ve give the family so far,” Byard said.

The family will be auctioning off a basketball signed by members of the Oklahoma City Thunder basketball team during the 2010 playoffs. The auction will open at 9 p.m. May 13 on eBay and will continue for 10 days. All proceeds will go to www.LadyBugHugs.org to help Audri and her family. Click here to bid.

Additional: Concert by donation only

When: June 5. Festivities start at noon, Dollar 98 will begin playing at 9 p.m.