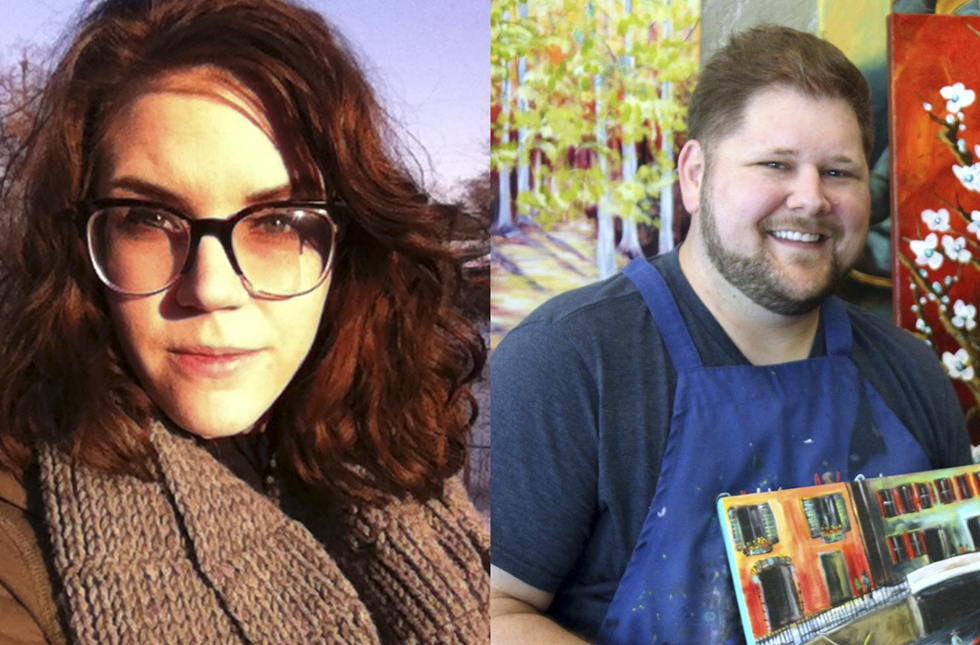 USAO art alumni Ali Crouch West (left) and Jay Tracy will return to campus to share experiences and advice with students for the seventh annual Art Career Lecture beginning at 3 p.m. on March 11 in Room 124 of Davis Hall at USAO.

Alumni Ali Crouch West and Jay Tracy are scheduled to return to the University of Science and Arts of Oklahoma on March 11 to speak to students about their art and their careers for the seventh annual Art Career Lecture Series.

The lecture series is scheduled to begin at 3 p.m. in Room 124 of Davis Hall.

West was USAO’s Faculty Association Outstanding Arts and Humanities Graduate for the Fall Semester of 2009.

After earning her bachelor of fine arts (BFA) degree, West went on to Vancouver Film School, where she graduated with a degree in classical animation.

Soon after graduation, she began work as a designer for the online Academy, K12, Inc.

West works now as a digital designer for Safety Skills as a professional artist for the past five years where her primary job duties include animating, illustrating and constructing interactive web content.

She enjoys Oklahoma City art events in the Plaza District and spending time with her husband and pets.

Native to southwestern Oklahoma, Tracy is a 1997 graduate of Mountain View-Gotebo High School. He attended USAO from 1997 until 2001 graduating with a BFA in painting.

Tracy grew up in a family surrounded by art. Both of his parents are self-taught artists.

During Tracy’s childhood his love for painting really began to blossom around the age of eight.

“I always tinkered around with paint … always doodling and creating paintings that looked like those of Grandma Moses,” Tracy said. “It wasn’t until the night before a S.W.I.M competition, at SWOSU in Weatherford, Oklahoma, when my dad really showed me the techniques used to create a beautiful painting. I attended the competition the next day and placed second overall … I was hooked!”

From that point on, Tracy began painting and selling his art (mostly watercolors) to local community supporters.

For the past 11 years, Jay has been a graphic designer for the Oklahoma City Zoo and also a lead artist for Paint Your Art Out, in Edmond, Oklahoma.

The lecture is open and free to all USAO students and is sponsored by the USAO Art Department and the USAO Alumni Association.