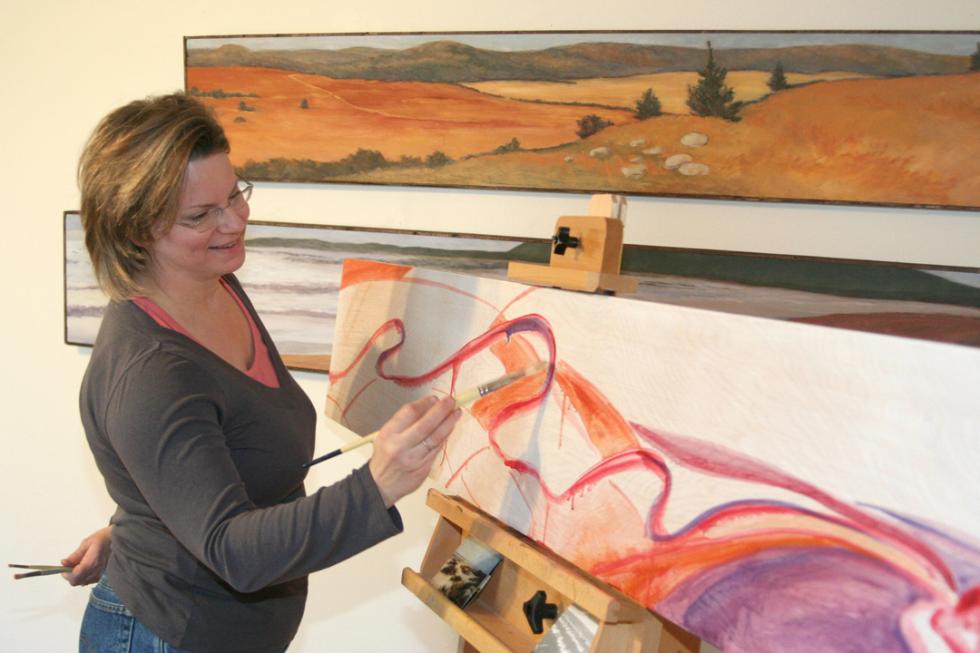 CHICKASHA – Chickasha High School art teacher Patricia Herrera Morgan understands overcoming adversity to come out on top. The 1999 graduate from the University of Science and Arts is debuting her solo exhibit at the USAO Art Gallery with “Soul Windows.”

“The initial concept for the display was closet doors,” Morgan said. “I had three sets of those in my home. When I took them down, I got really excited and realized, ‘I can paint on those!’ I like the width and the narrowness of them because it draws you into the horizon.”

On Feb. 22, Morgan will speak about her current exhibit from 4-4:30 p.m. in the USAO Art Gallery. The exhibit runs through March 16 and features a colorful display of sloping landscapes, swirling shapes and patterned collages. The event and exhibit are free and open to the public.

Morgan attended USAO after high school, but was forced to take time off due to her first pregnancy. After more than 10 years and two additional children, Morgan’s daughters were in grade school. A single mother of three, she decided to finish her degree.

Now eight years later, Cecil Lee, director of the USAO Art Gallery and Regents professor of art, has offered Morgan a chance to exhibit her works.

As a landscape painter, Morgan knows that location is everything when painting doors.

“With the idea of distorting the horizon and distorting the road, I have two photographs that I’m combining in one painting,” Morgan said. “One is an aerial view of a snaking Oklahoma river, and it’s combined with an aerial view of a snaking Oklahoma road. Another one is the Gulf of Mexico, where you see the waves coming into the beach and the curve of that is combined with a view looking back inland at the water.

“There’s another one that’s less distorted,” she said. “There’s the cloistered arches from the New York Metropolitan combined with the New Mexico landscape.”

For Morgan, inspiration has come from unlikely sources. A few years ago, Morgan’s father was hospitalized with cancer. During the many hours she visited him, Morgan would sketch flowers for him and plan larger works.

Recognizing shapes and patterns in her father’s own X-rays, charts and CAT scans, Morgan was reminded of the southwestern Oklahoma landscapes she had been painting for years.

“That was kind of odd, ‘cause when they put that CAT scan up, you’re finding out this news,” Morgan said. “I’ve always been interested in the diagrams of the body and how the different systems work together. Then there’s this landscape thing about being out there in it, where you see and you smell and you’re away from civilization and there’s these open spaces and lots of layers in the land. There’s a compatibility between the two.”

In the midst of her father’s failing health and eventual death, Morgan was able to find beauty and inspiration to continue creating art.

Although she was born in Indiana, Morgan’s ties to Chickasha are strong.

“I grew up in Indiana and came to Oklahoma in the 1980s,” Morgan said. “I remember thinking the landscape in western Oklahoma was absolutely beautiful. I’m a happy transplant!”

In her fifth year as an art teacher at Chickasha High School, she has served as an instructor in Chickasha’s ArtScope Learning Center each summer since 1999. She is a board member of the Chickasha Area Arts Council and has appeared twice as an actress in the annual Rose Hill Cemetery Tour.

She is a member of the Oklahoma Visual Arts Coalition (OVAC), National Art Educators Association and Oklahoma Art Educators Association, as well as state and national education organizations. In 2006, Morgan was awarded a Professional Basics Grant from OVAC to cover costs associated with the photo processing of her new body of work. Although she has been featured in a dozen state art shows, this is her first solo exhibition.

In many ways, Morgan’s art reflects the fresh start that she has recently experienced. Last year, Morgan married John Morgan, 1997 alum and theater facilities manager at USAO. She recently completed her new studio, and this marks her first solo art exhibit.

With visual allusions to flowers, seashells, hills and nature, Morgan’s art has a very organic feel that’s as warm as it is inspiring. Color, in fact, may be the biggest appeal in Morgan’s works.

“My biggest inspiration is color, color interactions, certain colors, visual movement; texture’s very interesting to me,” she said. “I like combining places and colors and shapes and textures to create a new place.”

“I think I’m fairly young to realize what’s important in life,” she said. “I don’t have to wait until I’m 60. I can learn to live a simple lifestyle so that it’s not about having this or having that. That’s not what drives me. I’m blessed.”

On March 3, Morgan will host a collage-making workshop at her home studio in Chickasha from 1-4 p.m. For $15, students of all ages will learn the basics of collage construction and create an original work using provided materials. Space is limited and registration is available by phone at (405) 574-2902.

Morgan’s art exhibit is on display through March 16. The USAO Art Gallery is located in Davis Hall on 17th Street between Alabama and Grand Avenue. Art Gallery hours are Monday through Friday, 8:30 a.m. to 4:30 p.m. Admission is free and open to the public. More information is available at (405) 574-1344 or online at www.usao.edu/gallery.