Cindy Maddera -- 100 Alumni You Should Know 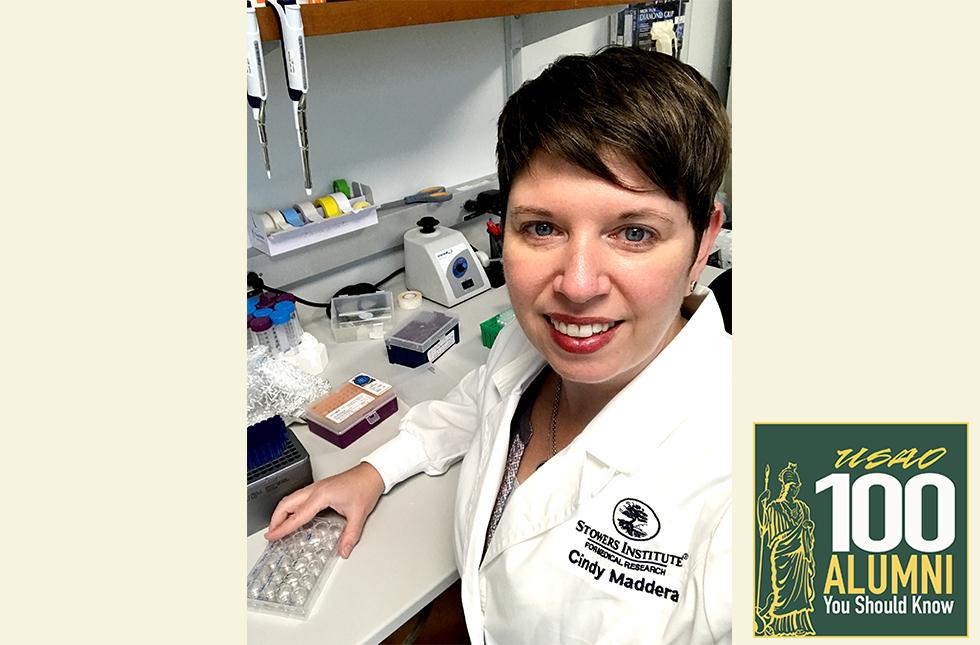 USAO graduate Cindy Maddera describes herself as “a scientist who gets to be an artist.” The 1998 alum received her degree in biology and is a research assistant in the Microscopy Core Department at the Stowers Institute for Medical Research in Kansas City. Combining science and art is something she learned at USAO.

“A great emphasis was placed on the connection between art and science while I was at USAO. I think this made me a more creative scientist, meaning I learned to approach an experiment or problem from many different angles. Today, I help people take beautiful images that gives us some knowledge about cell to cell interactions and protein associations,” Maddera said.

Maddera says one of her greatest career accomplishments was an image she took of Dictyostelium infected with Legionella which was chosen for the cover of Cellular Microbiology in July 2007.

She went on to earn her Master’s degree in microbiology and molecular genetics from Oklahoma State University. In addition to her work, Maddera says she tries to do something creative every day.

Maddera writes and shares photos on her blog and is an active volunteer with the AIDS Walk of Kansas City every year. During the AIDS Walk, she raises money, organizes memorial flags, and photographs the event in order to raise awareness for HIV and AIDS.

She talks some about her life on her blog. “My husband Chris, our muppet dog Hooper and I up and moved from our small town to the slightly larger town of Kansas City in 2011 so I could work doing my dream job of playing with fancy pants microscopes. We all had an amazing year exploring a new place and buying our first house. Then Chris got sick and died (sounds crass, but really it's the easiest way to say it).

“About eight months after Chris, I had to let Hooper go too. For a while it was just me, the Widow Maddera, navigating this crazy maze of grief and being single again. I had some adventures in dating and then I met Michael. He bought a scooter because of me and I let him move in. He brought along his little girl, the Cabbage, who we have with us every other weekend. I went from married dog owner to widowed single woman to partnered part time bonus mom.”

Maddera says that she would choose to come to school in Chickasha again. “If I had to choose and do undergrad work all over again, I would still choose USAO. I made friends there that to this day, I call family. My education made me a better scientist and my experience at USAO made me a better person.”