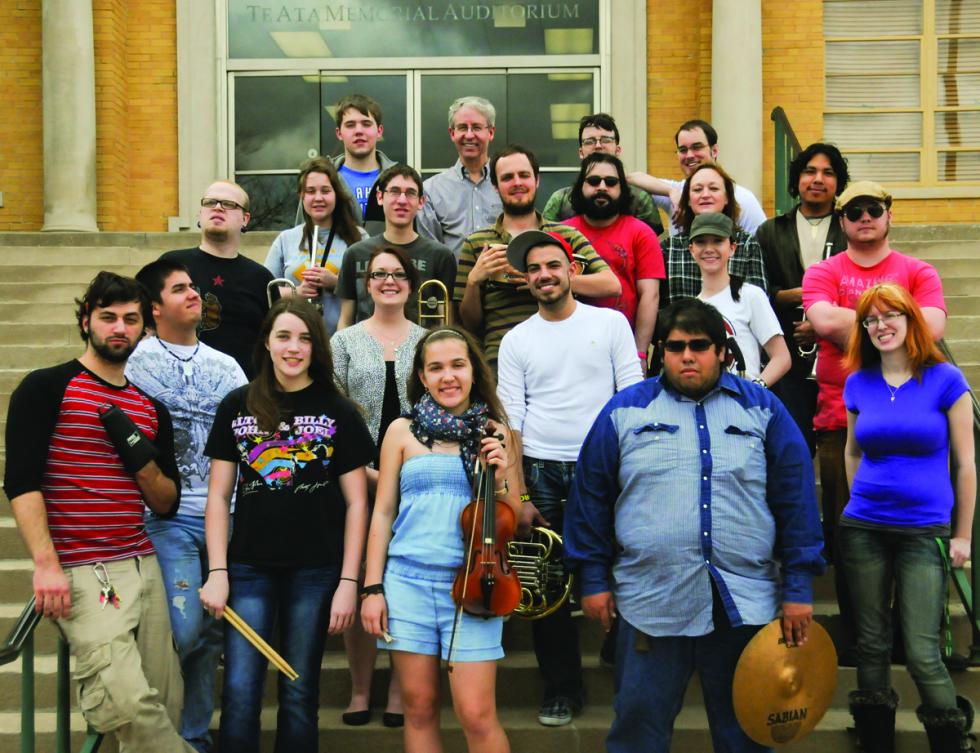 The Concert Wind Ensemble and the Key Players rock ensemble are scheduled to team up for a joint concert under the direction of Dr. Dan Hanson at 7:30 p.m. on Monday night in Te Ata Memorial Auditorium at the University of Science and Arts.

Hanson, professor of music, has prepared a special program for the wind ensemble that highlights the work of two composers who have made an impact on his own life.

Topping the program is “Flourishes” by composer William Francis McBeth. McBeth was a respected composer, author and conductor who died in January.

McBeth served as guest composer and clinician of the Texas Tech band camp when Hanson was an aspiring student musician.

“After years of playing in the band as a trumpet player, I switched gears to playing percussion during my junior year,” Hanson recalled.

“Dr. McBeth was debuting a new piece called ‘Dramatico’ at the camp that summer that featured a very difficult xylophone part and none of the other guys wanted to play it. It was sort of foisted on me because I had played the piano for nine years.”

“I worked furiously to perfect that part, performing it silently over and over while the other sections of the band mastered their lines,” Hanson said.

“Finally, the big moment came and Dr. McBeth pointed at the percussion section and I just nailed it on the first try. When I was done, he stopped the whole band, threw his arms up in the air and proclaimed, ‘There is a star in heaven tonight!’”

Hanson described the moment as one that told him what he wanted to do for the rest of his life.

“Dr. McBeth was one of the most positive and humorous figures I’ve ever met in my life and I wanted to pay tribute to the enormous influence he had on my life with this performance,” Hanson said.

Also featured on the playlist are works by Oklahoma composer, Ed Huckeby. Huckeby, who now serves at the president of Southwestern Christian University, taught for years as a professor of music at Northwestern Oklahoma State and Northeastern State (Broken Arrow) universities.

“I knew Ed as a director for years before he casually asked if I’d like to listen to a recording of some of his compositions,” Hanson said. “I was blown away by the quality of his compositions and have used them since due to their playability. The fact that he is an Oklahoma composer and a friend just makes sharing them with the public that much more sweet.”

The university’s premier rock ensemble, the Key Players of USAO, is expected to debut a wide-range of new material for this concert.

“The keyboard-driven group demonstrates complex and powerful sounds,” Hanson said. “We showcase the richness of synthesizers with unique arrangements of popular hits."

The set for this show includes original arrangements of several rock classics including “Peter Gunn,” “Kokomo,” “Desperado,” “In-A-Gadda-Da-Vida,” “You Really Got Me” and “Burn Down The Mission” among others.

The Key Players of USAO includes guitarist Adam Bryant, a senior from Tuttle; drummer Ariel Morgan, a junior from Enid; bassist Jesse Merritt, a senior from Minco; keyboardist Nathan Allen, a freshman from Amber; and Hanson, who plays keyboards with the group.

More information about the concert or the USAO music department can be obtained by calling 574-1297 or by visiting the university’s website online at usao.edu.