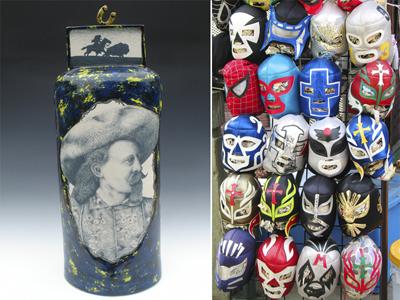 An exhibit featuring two highly charged artists will wrap up the fall season of the Art Gallery at the University of Science and Arts. Mixed media artist Narciso Argüelles will exhibit his work alongside ceramist Stuart Asprey in an exhibition schedule Nov. 3 – Dec. 12.

“This show offers a cutting-edge visual commentary on social, political and historical issues using symbolic and character imagery,” said Layne Thrift, assistant director of the gallery. An artist’s reception is schedule Nov. 5 at 6 p.m. in the gallery.

Argüelles’ work has been displayed in professional exhibits around the world including the Ninth Biennale of Sydney, the First Johannesburg Biennale in South Africa and the Alternative Biennale in Argentina. “He has exhibited in galleries throughout the United States spanning from New York City to Los Angeles,” Thrift said.

Argüelles grew up on both sides of the Mexican and U.S. border. He started collaborating with the internationally known Border Art Workshop/Taller de Arte Fronterizo while still an undergraduate student at the University of California in San Diego.

Asprey has exhibited his work in juried shows and won awards in Oklahoma and other states. Featured in more than 30 national and international juried exhibitions in the past four years, his drawings and ceramic works have been involved in several group and one-man art exhibits.

He regularly participates in regional art exhibitions and has had work published in Clay Times and Ceramics Technical. His work is included in private collections across the United States and Europe.

Admission to the exhibit is free. Gallery hours are weekdays from 8:30 a.m.-4:30 p.m. The gallery is located in Davis Hall on the USAO campus.

The Art Gallery was formed in 1997 to promote the visual arts of Central Oklahoma with a special concern for the expressions of the diverse cultures and the role that educators have played in forming those expressions.