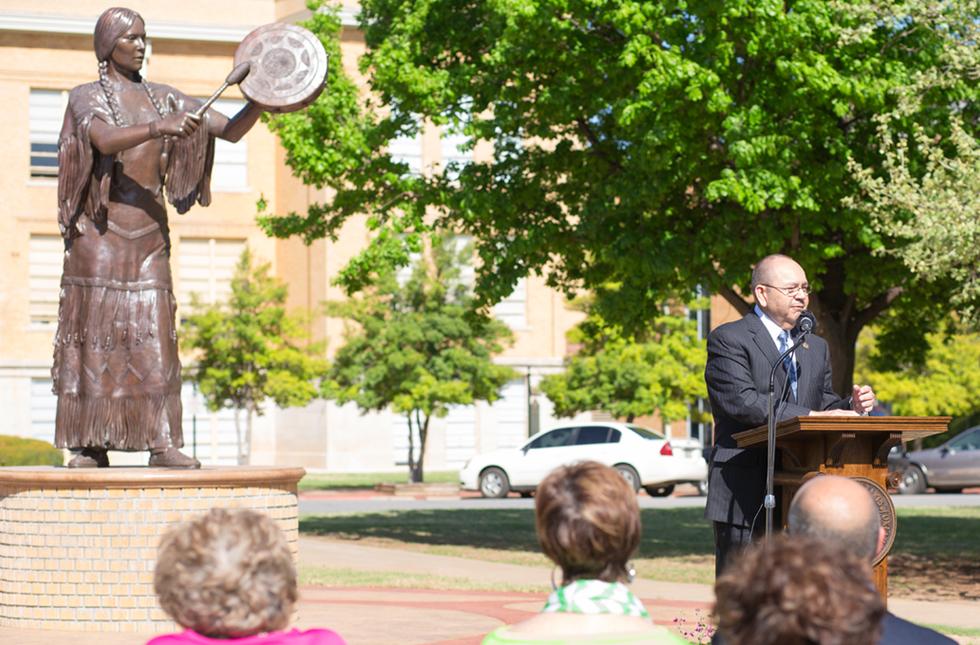 In the fall of 1915, Mary Thompson, of Tishomingo, arrived in Chickasha to attend the Oklahoma College for Women, an institution that was, itself, less than ten years old.

On April 25, 2014, just eighteen months shy of the one hundred year anniversary of her arrival, Te Ata (Mary) Thompson Fisher was forever memorialized for her contributions to American Indian identity and Oklahoma culture as statesmen, educators and community members gathered to dedicate a statue of her likeness on that same campus, now known as the University of Science and Arts of Oklahoma.

In his opening remarks, he greeted the crowd that had gathered for the dedication, including a number of dignitaries with ties to the campus and Te Ata’s legacy.

Feaver described the significance of the statue as a reminder “of our extraordinary past and what that past has bequeathed to us.

“After we’re all long gone as active participants in this world, Te Ata will stand on this spot, saying to those who come to gaze on her, ‘This is who we’ve been. This is who we are and this is where we’re going. And, it’s a journey well worth joining,” Feaver said.

Speaking with campus media later, Cole described Te Ata as “the most important maternal figure in my life, next to my mother.”

“To see someone who began on this campus in such an epic personal journey that lasted 80 years, and who literally touched millions of people all over the world, not only remembered but also honored in this way is an extraordinary special moment,” Cole said.

“She was a great inspiration to everybody with whom she came in contact,” Anoatubby said. “As far as a tribe and her family are concerned, this day is extremely important. There is a likeness of her right here at the university where she graduated— a place that she loved— and is really part of why she was able to do what she did.”

Hair described her legacy as being two-fold.

“She was courageous achieving what she did, against all odds, first of all being Native American and, second, being a female in this country at a time when females were supposed to be seen not heard,” Hair said.

Actor Tana Takes Horse brought Te Ata’s legacy momentarily back to life as she delivered a short scene from Judy Lee Oliva’s play Te Ata, which had its world premiere at USAO in 2006.

Gene Thompson and his son, Harold, burned sweet grass and offered up a prayer while circling the statue in a ceremony known as “smudging.”

After graduating from OCW in 1919, Te Ata went to New York to pursue a career in acting. She developed a one-woman show to illustrate and teach American Indian culture to the world.

At the invitation of First Lady Eleanor Roosevelt, Te Ata performed at the first state dinner given by President Franklin Roosevelt in 1933. In addition to performing for King George VI and Queen Elizabeth, Te Ata performed for royalty and heads of state in Europe and South America.

At a luncheon that followed the dedication ceremony, numerous individuals were recognized for their contribution to the Te Ata statue project.

The university presented limited edition medallions, designed by Hair and bearing Te Ata’s likeness, to members of the committee responsible for selecting the artist and overseeing the project.

Committee members who were not present at the luncheon but who will receive medallions include: Kim Baker, past executive director of the Oklahoma Arts Council; Dr. Leslie Hudson, former USAO Regent; and Debbie Williams, director of Oklahoma Art in Public Places.

Medallions were also given to Johnny Trammell, of Trammell Construction, who constructed the base and plaza on which the statue stands, and to Hair.

Limited edition busts were also given to dignitaries associated with the project.

The first bust was presented to Feaver, who accepted it on behalf of the university.

Another was given to Anoatubby on behalf of the Chickasaw Nation.

A third bust was given to Gene Thompson on behalf of the family. Thompson then transferred possession of the bust to Cole so that it might reside in his office in Washington D.C. until his time of service should be complete.

A final bust, the first cast from a run of only 25, was then given to the Willetts.

In an unscripted moment, the Thompson family also presented the Willetts with a book that belonged to and contained handwritten notes in the margin from Te Ata and her husband, Dr. Clyde Fisher.

Nan Willett then took the podium to thank the Thompsons for their generosity and memorialized her mother, Iza Nunnery Bilbrey (OCW, Class of 1924) who introduced her to the university and to Te Ata.

The Te Ata statue project is a component of USAO’s comprehensive grounds master plan, one of four projects being funded by the Ready, Set, NOW campaign.

Launched in 2012, the campaign seeks to raise $4.85M in private gifts to fund an ambitious five-year scholarship plan, update and renovate Austin Hall, make improvement to Nash Library and develop and implement a comprehensive master plan for the campus grounds.

Medallions and busts are available for purchase through the USAO Foundation. All proceeds will be used to support the campus grounds master plan.

More information on the bust and medallion can be obtained by calling Nealeigh at 574-1324.