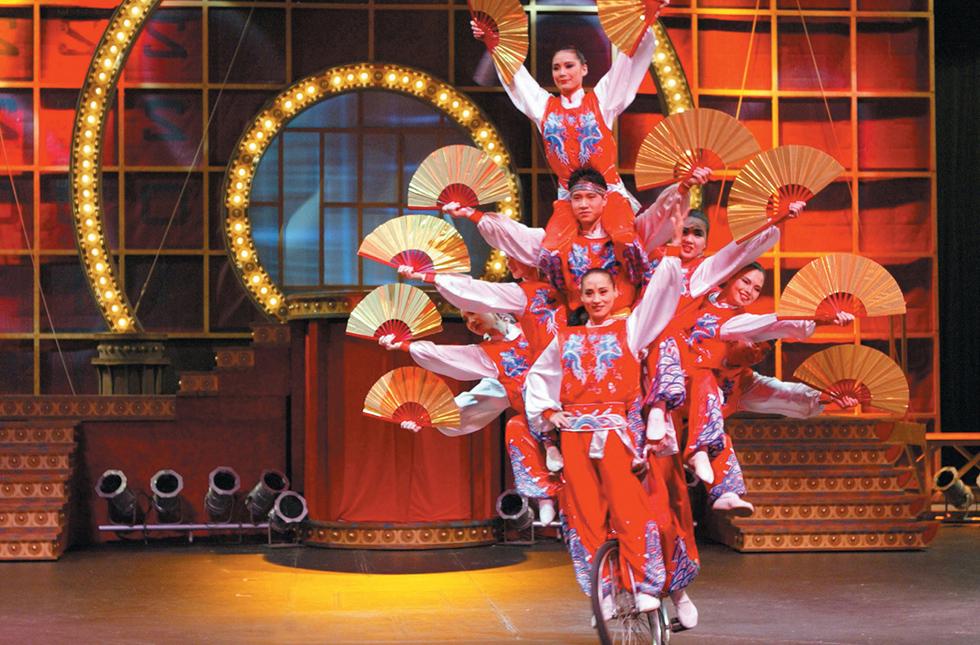 The third century before the common era was a busy one.

Rome defeated Carthage twice and established itself as a world power with which to be reckoned. The emperor Ashoka unified the Indian subcontinent under his rule and, for a time, established Buddhism as the principle religion of that land. Just across the Himalayas, Qin Shihuang established the first historical dynasty of China, the Qin dynasty, and began construction on the Great Wall.

And, during the third century BCE, the first historical record of Chinese acrobats can also be found.

Now, some 2300 years later, this rich tradition of music, costumes, dancing, contortions and tumbling returns to the University of Science and Arts of Oklahoma for a one-night only performance by one of the premier Chinese acrobatic troupes in the world.

The Golden Dragon Acrobats are scheduled to perform beginning at 7:30 p.m. on Nov. 12 in Te Ata Memorial Auditorium as part of the Davis-Waldorf Performing Arts Series (DWPAS).

General admission tickets for the show are $12 for the general public, $10 for seniors 60 and over, $4 for all students and kids under 18, $7 for USAO staff/faculty and free for USAO students.

Tickets can be purchased at the USAO Business Office or online at usao.edu/dwpas.

This performance will mark the second time that the Golden Dragon Acrobats have wowed attendees at Oklahoma’s only public liberal arts university. The acrobats thrilled a capacity audience upon their first visit to campus in 2006 with death-defying stunts that have lingered long in the memory of those who attended the show.

Randy Talley, former director of communications and marketing at USAO, was one of those audience members.

“The acrobats built a tower out of bodies and chairs, one teetering on another, all the way to the ceiling of Te Ata that left the audience completely breathless,” Talley said. “We couldn’t believe that they pulled off what they achieved. Everyone was riveted and it was packed to the doors.”

The Golden Dragon Acrobats were founded by Danny Cheng in 1985. His father, Lien Chi Chang, had led an earlier incarnation of the troupe, of which Danny was a member, until accepting a job as head coach at the National Taiwan College of Performing Arts.

Upon inheriting his father’s mantle, Danny Cheng brought the Golden Dragon Acrobats, which had been well known across Asia, to the United States to begin building the legacy anew.

Since then, the troupe has performed in more than 65 countries across five continents and averages over 200 performances a year.

Dr. Ken Bohannon, associate professor of music and coordinator of the Davis-Waldorf Performing Arts Series, is ecstatic to welcome the Golden Dragon Acrobats back to Chickasha.

“The mission of the Davis-Waldorf Performing Arts Series is to bring top-notch talent capable of delivering culturally-rich performances to the campus and surrounding communities at an affordable price,” Bohannon said. “In the 13 years we’ve been hosting these shows, there are a handful of performances that stick out in my mind as the yardstick by which I judge all of the others.”

“The Golden Dragon Acrobats gave us one of those performances in 2006 and I can’t wait to see how their show has been refined and improved since. This show will undoubtedly be one of the highlights of my year.”

The DWPAS will continue its thirteenth season on Feb. 7 with Ryan and Ryan, a dynamic father-son piano duo, known for a seamless blend of new and old school music, who has been inducted into the Oklahoma Jazz Hall of Fame.

The DWPAS is produced by USAO in conjunction with the Chickasha Public School Foundation and is supported in part by an award from the Oklahoma Arts Council, the National Endowment for the Arts, the Walton Family Foundation (through Arvest Bank) and the USAO Foundation.