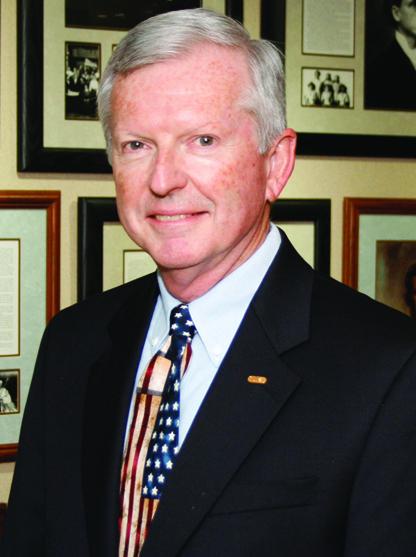 Note: This is the third of a four-part series on the distinguished individuals who will be honored by the USAO Alumni Association at this year's annual Homecoming on Nov. 5-7.

CHICKASHA – USAO supporter and long-time advocate of social studies education Eugene Earsom will be one of three alums inducted into the USAO Alumni Hall of Fame during Alumni Homecoming at the University of Science and Arts Nov. 5-7.

Earsom will be honored along with fellow inductees Dr. Ron Anderson and Barbara Benton and Young Alumni Award recipients Dr. Grant Evans and Brandon Pasley during the Nov. 6 ceremony. Homecoming registrations are being accepted for all alums and former students at the USAO Alumni Development Office, (405) 574-1290 or online at usao.edu/alumni. Registration packages for the entire weekend are $50, which is an all-inclusive package that includes all meals.

Earsom is a 1970 graduate of the Oklahoma College of Liberal Arts (now USAO). He earned a master’s degree from the University of Oklahoma in 1981. He is the program director for the Oklahoma Alliance for Geographic Education.

Earsom has had the opportunity to study and train in Japan, China, Indonesia, Oklahoma, California, Wisconsin, Missouri, and Washington, D.C. His personal travel has taken him to Canada, Mexico, Denmark, Norway, Sweden, Finland, the Netherlands, Jordan, Israel, Egypt, Italy, the United Kingdom and several other countries.

He is a life member of the USAO Alumni Association and has served on the board of directors three different times. Earsom represented USAO on the Higher Education Alumni Council of Oklahoma twice, and served in 2010 on the OCLA Reunion planning committee.