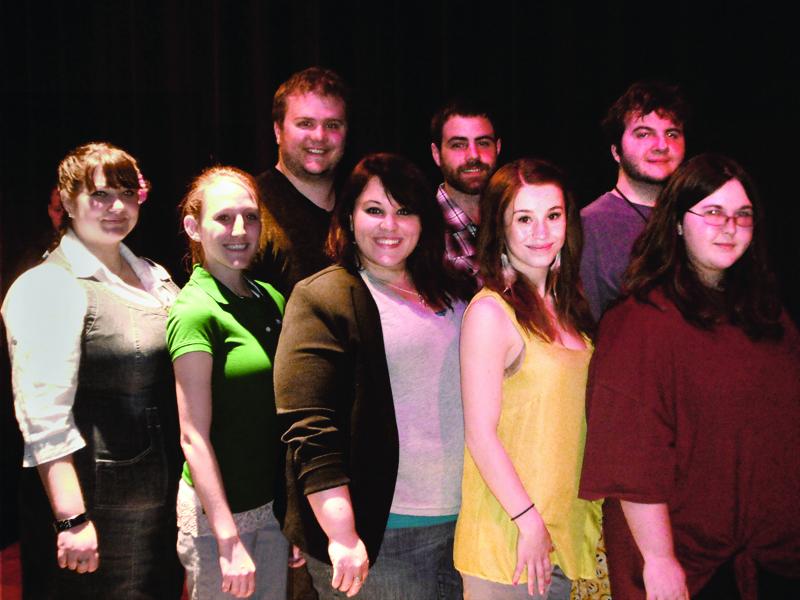 Eight USAO students were honored for scholarship and service as they were inducted on April 9 into the Alpha Psi Omega chapter at the University of Science and Arts of Oklahoma.

Sigma Xi is the USAO chapter of Alpha Psi Omega, a national theatre honor society. With more than 600 casts, the organization is the largest national honor society in America. Its goal is to acknowledge those demonstrating a high standard of accomplishment in theatre and to encourage a wider fellowship for those interested in theatre.

The new members were initiated and welcomed to the organization by the seven current members of the chapter and their advisor, Katie Davis, APO member and assistant professor of drama.

“I am particularly proud of this group of initiates,” noted Davis.

“USAO re-activated our chapter of this prestigious organization in 2008. Since that time, the drama program has grown, and the standards of the university have been raised. This group of students has been actively pursuing membership in this national honor society since their arrival as freshmen, and they have contributed enormously to our campus and community through service, academic excellence, and theatre practice.”

In an address to the initiates, Katie Davis shared a message from the National Business Manager, Dr. Bret Jones of Wichita State University, explaining the significance of the chapter’s name.

“Alpha Psi Omega teaches nothing new in saying that you will be rewarded according to the quality of your performance. This is the Alpha and the Omega of this society – the beginning and the end.”

“To be an artist in any line requires infinite capacity for hard work and attention to detail. Now that you, by your hard work, have been admitted to this society, you must conserve your life, your health, and your character. And therefore, to ‘beginning and end’ let us add the cardinal principles for which the letter ‘Psi’ stands in our name: ‘mind and spirit.’”

The prestigious organization first received an official charter for the chapter at OCLA in May 1966. But it was short lived. The last official initiation ceremony for the original chapter was held in November 1968. Today, more than two-dozen APO members exist among the alumni of OCLA and USAO.

The USAO chapter was reinstated in 2008 with the official initiation of nine pledges to the honor society.

To qualify for the organization, students must demonstrate academic excellence and must have earned 75 points by participating in college theatre productions. It is required that production points be earned in more than one of the following categories -- performance, production, dramaturgy, playwriting or service. As part of the initiation, each student must complete an examination and publically perform 12 lines from a Shakespeare monologue from memory.