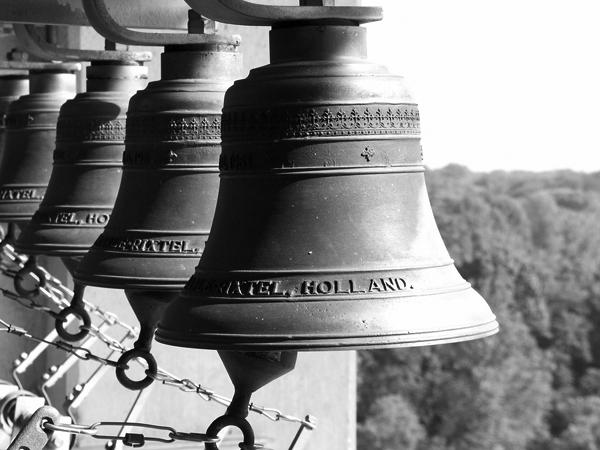 Community members and campus residents are noticing a new – but distinctly old – sound coming from the University of Science and Arts on the OCW National Historic District – the sound of bells.

Devoted alums from the class of 1956 have raised the funds and launched the project as their salute to USAO’s centennial celebration.

This new carillon system uses advanced electronics that can play bells on the hour, play up to 1,000 stored songs, broadcast a live keyboard performance and be used for security announcements. The university is testing the system with Westminster Chimes, a traditional song for this medium, played on the hour.

“Comments from students, faculty and community members have been delightfully positive,” said USAO President John Feaver. “Alumni have done a remarkable thing with their gift, enhancing the ambiance of this historic campus with something that is both highly symbolic and terribly practical.”

Members of the Class of 1956 raised $16,000 of the $20,500 needed for the project. The remaining $4,500 will be provided by the university to enhance its security features. The testing of the clarillon started Nov. 7 – during Alumni Homecoming at USAO. Comments from the community are welcome at media@usao.edu.

“Members of the class of 1956 remain very interested in music. Many of them were part of the glee club on campus,” said Julie Bohannon, director of alumni development at USAO. “In fact, this was the class that sang to the legislature in 1953 when a bill was presented to make Oklahoma the state song. The carillon is a tribute to their love and devotion both to music and their alma mater.”

A fundraising leader in this project was Betty Remy Burns, a 1956 alum from Cincinnati, Ohio, who was named to the USAO Alumni Hall of Fame in 2006.

The carillon is just one of a long list of projects completed by alumni on the campus. One of the most recent projects was the restoration of the Home Management House on campus, to which alums donated nearly $300,000. Another centennial project was the Owens Flag Plaza, donated by alumni Mark and Caroline Owens and benefactors Lonnie and Dell Jourdan. It was dedicated in March 2004.

Two years earlier, the class of 1949 erected the Alumni Chapel Bridge, which immediately became a campus icon, standing just west of the Alumni Chapel, built by alums in 1968. During Homecoming 2003, alums dedicated the restored Greek Theater at the south entrance to the campus, built with a significant lead gift by real estate expert Mo Anderson of Austin, who attended OCW in the 1950s.

The new Stevens Alumni House has been known on campus since 1930 as the Home Management House. The house will provide new space for the Alumni Development office, as well as meeting rooms and overnight accommodations for alumni guests.

Speakers for the carillon system are located on top of Troutt Hall and can be heard on campus and in the neighborhood surrounding. In addition to the song library, the school will also be able to play the USAO College Hymn and other original pieces played by faculty.

A traditional carillon is a musical instrument consisting of at least 23 cast bronze cup-shaped bells which are played one after the other or sounded together. Many of the carillons today follow the path of other modern musical instruments – they are electronic. Carillons are located at many college campuses across the United States. The greatest concentration of carillons is still found in The Netherlands, Belgium and in northern France.