Enrollment Up 4.3 Percent at USAO; Financial Aid Grows to $8.2 Million 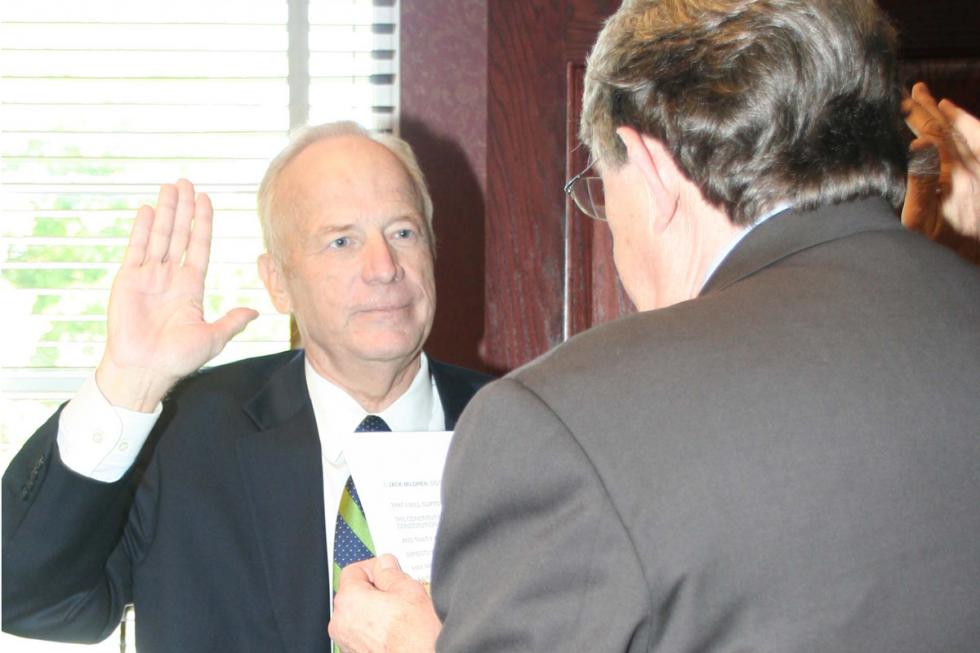 Fall enrollment is up by 4.3 percent at the University of Science and Arts of Oklahoma, which welcomed students from 26 states, 12 countries and 52 Oklahoma counties this fall, said USAO President John Feaver on Tuesday.

In its regular monthly meeting, the USAO Board of Regents welcomed new member Jack Mildren, authorized the renaming of the Main Auditorium, heard a report on financial aid trends, approved an alumni plan to renovate and occupy the Home Management House, and agreed to purchase property south of the campus.

Total “headcount” enrollment at USAO this fall is 1,492, which is up from last year’s 1,430, and the highest in eight years.

Full Time Equivalency enrollment (FTE) is down by 1.7 percent to 1,064. That number, used by the Oklahoma State System of Higher Education in determining budgets, is above the five-year average, and has remained steady for the past ten years.

Taking the Regents’ oath of office, administered by President John Feaver, was former Lt. Governor and energy entrepreneur Jack Mildren, appointed by Gov. Brad Henry to serve a seven-year term on the USAO Board of Regents in the spring. Mildren was confirmed by the Oklahoma Senate on May 15.

Mildren’s first earned statewide headlines as a star quarterback at the University of Oklahoma. He played pro football while building a separate career in energy. In 1979 Mildren and a partner started Regency Exploration, which ultimately was sold to a Fortune 500 company. In 2003, Mildren was named vice chairman of Arvest Bank in Oklahoma City. Mildren accepts the chair being vacated by Regent Ed Hicks of Chickasha.

For the third year in a row, USAO has been ranked among the colleges graduating students with “Least Debt” in U.S. News & World Report’s America’s Best Colleges guide for 2007. In the same publication this fall, USAO was ranked for quality and value on the magazine’s “Great Schools, Great Prices” list.

The fastest growing program at USAO – and across Oklahoma – is the Oklahoma Higher Learning Access Program, which promises college tuition to students as young as eighth grade if they maintain high marks in high school and take college prep courses. The program is only nine years old and already 167 students at USAO are receiving more than $420,000 in assistance from the state OHLAP program.

Plans are being drawn and construction may begin soon on four separate capital projects at USAO, John Feaver reported.

“The momentum we built during lean years is producing visible evidence of progress,” Feaver said. “These new facilities will serve critical classroom needs and create the most inviting environment ever for our alumni and special guests.”

The first project to get underway may be a complete remodeling and expansion of the Art Annex, built in 1918 as the original steam plant, and refurbished in 1980 after construction of a new steam plant. Located west of Davis Hall, the building is used for classes in ceramic hand-building, pottery on the wheel, sculpture and jewelry making. Architects for that and other bond-funded projects at USAO are from C.H. Guernsey and Company of Oklahoma City.

Canning Hall, built in 1935 as a residence hall, will be gutted and redesigned to serve as a new kind of deaf education facility, providing services to deaf persons of all ages and educational opportunities to college students who wish pursue careers serving the deaf. Projected cost for that renovation is $1.8 million.

Regents also approved a fundraising plan among alumni that could lead to the renovation of the Home Management House. If successful, the campaign will provide new offices for the Alumni Association, the Alumni Development Office, as well as meeting space and overnight accommodations for visiting scholars and alumni guests. Cost of that project may exceed $300,000, to be raised privately by alumni. Variously used over the years, the building’s name derives from its primary use as a domestic management laboratory for the home economics program.

A resolution passed last month by the USAO Alumni Association calls for restoration of the facility, pledges to raise the money, and calls for the 1930 structure to get a new name after the campaign.

The fourth project in queue, Feaver said, is the renovation of the President’s Home. Already a private donor has pledged most of the projected cost.

In other business, Regents ratified the naming of Te Ata Memorial Auditorium, which was done in a lavish ceremony this summer in conjunction with the world premiere production of “Te Ata, a Play with Music.” The facility was renamed for American Indian storyteller Mary “Te Ata” Thompson Fisher, who graduated from the Oklahoma College for Women in 1919 and gained international attention as an ambassador for Indian culture, Oklahoma, and her alma mater.

Regents authorized Chief Financial Officer Mike Coponiti to negotiate the purchase of a home at 1825 W. Grand Ave, owned by the estate of longtime college staff member Margaret Boone Frey, a 1933 alumna. The 1928 structure sits on the southeast corner of Grand and 18th Street, across from the USAO Physical Plant. If acquired, it would be used as rental property until further expansion of the campus is needed.

Resignations were accepted from Dr. James Pasley in political science, Nancy Calhoun in the library, Stephanie Buettner in admissions, and Kristen Davis in the physical plant. Longtime Alumni Director Myrtle Stephens of Gracemont retires this month after many years on the faculty and 15 years in the alumni office.

Regents also approved a change in status for Julie Bohannon, who was named director of alumni development after nine years in grants and proposals.