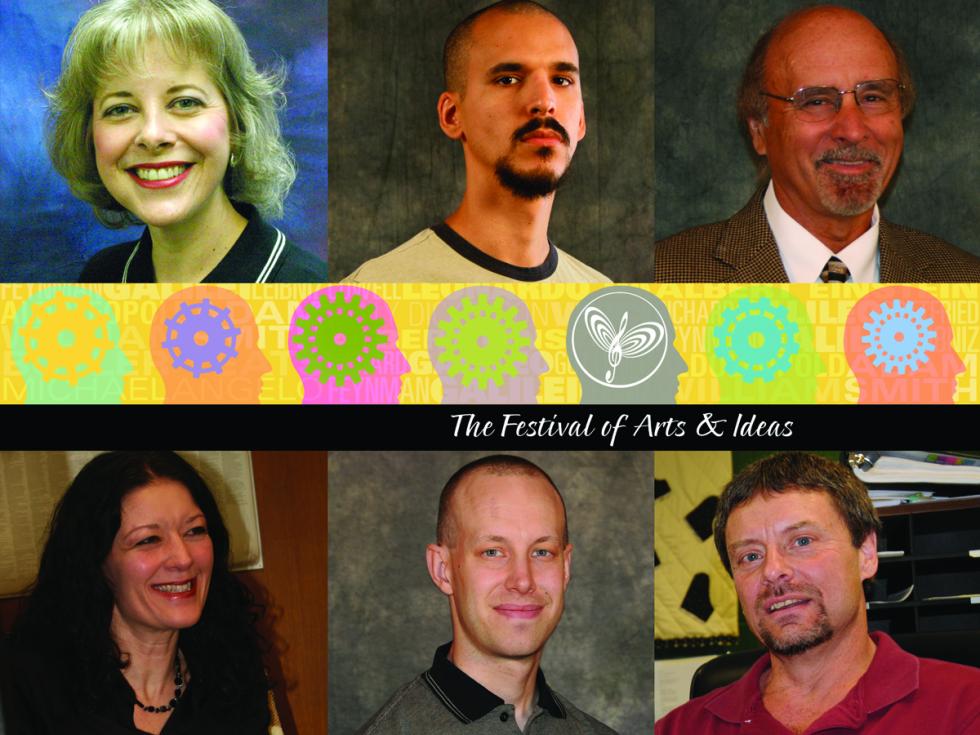 With a generous endowment from the Masonic Fraternity of Oklahoma, the Festival of Arts and Ideas is scheduled to launch its new season by looking at The Great Minds at 7:30 p.m. on Oct. 11 and 13 in the ballroom at the University of Science and Arts.

Both nights will feature four short excursions into the life and ideas of a person or people who reshaped the way we see the world and, in some cases, the course of history.

These vignettes will include traditional lectures as well as musical performances, multimedia presentations, dramatic interpretations and, in one case, a bowling ball being dropped from the ceiling.

Festival Director Rhenada Finch said, “Education isn’t confined to students in the classroom – we remain students all of our lives.

“With this idea in mind, the Festival of Arts and Ideas was created to offer fun, creative, interdisciplinary education not only to the students and faculty of USAO, but to our community area and beyond.  We are extremely excited to receive this support from the Masonic Charity Foundation who value this kind of continuing education as much as we do.”

Steve Breerwood, assistant professor of art, will present a slideshow and lecture about Asperger syndrome and how it manifested in the behavior and creative process of great thinkers such as Leonardo da Vinci and Michelangelo.

Dr. Jerry Hargis, regents professor of communication, will direct a small group of USAO drama students in a piece titled, “Great Minds Reflecting Great Ideas: A Reader’s Theatre presenting American Words of Inspiration for Times of Unrest.” Drawing from historical quotes delivered during times of great crisis in American history, the reading will evoke a sense of the American spirit as it has worked its way through difficult times in the past.

Dr. Shelly Rees, assistant professor of English, will present an interactive lecture on poet Emily Dickinson. Rees will demonstrate several poetic innovations that Dickinson introduced in her poetry and how these unique features make her difficult to pigeonhole into one literary period or another.

Dr. Darryel Reigh, professor of chemistry and chair of the science and physical education department, will focus his presentation on Aldo Leopold.

Leopold is considered to be the founder of the science of game management and introduced the idea that humanity’s relationship to water, soil and wildlife is a moral matter subject to the discipline of ethics.

Dr. J.C. Sanders, assistant professor of physics, will address the work of several great minds as he demonstrates the overarching importance of the law of conservation of energy. In “One Great Law to Rule Them All,” Sanders will use the work of Galileo Galilei, Albert Einstein and Richard Feynman as well as a flying bowling ball to show how this physical law is the most important.

Dr. Stephen Weber, professor of music and chair of the arts of humanities division, will provide the musical portion of a presentation on composer and music theorist Henry Cowell with Rob Vollmar, writer for the USAO news bureau. Weber will perform “The Tides of Manaunaun,” a piano piece that Cowell composed at the age of 16.

Matthew Watson, a junior economics major from Tuttle, will deliver his presentation on economist Adam Smith. Though better known for his groundbreaking work, The Wealth of Nations, it is Smith’s achievements in the fields of theology, policy-making, and philosophy on which Watson will focus, underscoring the interdisciplinary nature of our most important thinkers.

The Festival began in Fall 2007 with a series called “The Five B’s,” which was a series of interdisciplinary weeklong festivals highlighting the work of five composers and examining their immense influence.

The Festival, which continued to develop with each new season, received a huge push of support this year from the Masonic Fraternity of Oklahoma.  Leaders from the lodge's philanthropic foundation in the Sooner State visited campus in May to deliver a $100,000 endowment in person.

“I am proud, as an Oklahoman, that our state has this excellent institution dedicated to the arts and sciences, and I am thankful, as a Freemason, that our fraternity has the opportunity to support this university in its important goals,” said Grand Master of Masons Glenn Almy.

The Festival of Arts and Ideas is sponsored by the USAO Foundation and the Masonic Fraternity of Oklahoma and is free. For more information, please contact the USAO Media and Community Relations department at 574-1318.