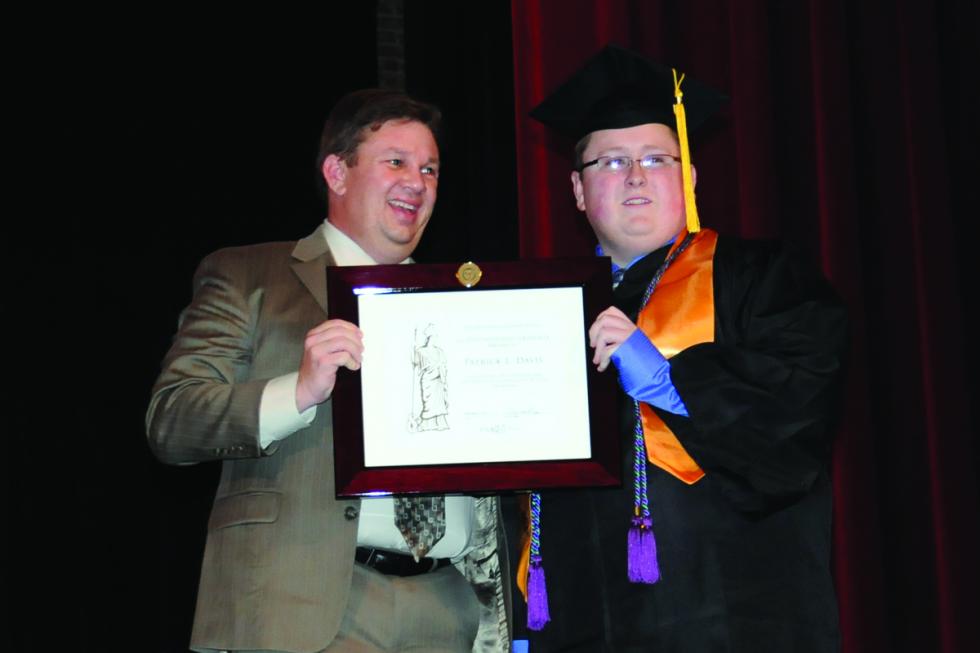 Graduates can face a complex world with confidence argued President John Feaver on Friday night as he addressed fall commencement at the University of Science and Arts. Families and friends filled Te Ata Memorial Auditorium to honor 75 graduates in the college’s 103rd year.

“The world we live in is terribly complex, full of contradiction and paradox, full of mystery,” Feaver said. “In order to deal best with its complexity, contradiction, paradox and mystery, it will be necessary to continue to learn anew everyday for the rest of one’s life.

“With your degree and the skills and abilities that it represents, I ask each of you to emerge as one within the community in which you choose to work and live -- to lead in the effort to improve not only your life and that of your family and friends, but to improve also the quality of life for those who are your neighbors, the fellow citizens of your community and beyond.”

“He (Patrick) sets high standards for all of his work and completes all assignments in a professional manner,” said Dr. Linda McElroy, associate professor of education at USAO. “He never settles for anything less than his own personal best.”

While at USAO, he was named to both the USAO honor rolls and Regents honor rolls. He served as vice president of Kappa Delta Pi, as a member of the Student National Education Association and was nominated for the outstanding graduate award from the division of education and speech language pathology. He participated in Books for Tots and received the Mark Walter Howery scholarship twice from the USAO Alumni Association. While at Redlands, he was named to the Phi Theta Kappa international honor society.

As part of an independent study project, Davis worked with Relay for Life. He helped paint murals at John Adams elementary in Oklahoma City and participated in a community service project during the spring convention of the Student Oklahoma Education Association. He volunteers for his church as a vacation Bible school teacher.

“I believe Patrick will bring a good sense of empathy to any setting where he is working with children. He possesses a good knowledge of strategies that will help him to be effective in the instruction he provides,” McElroy said.

Davis has already been hired by the Mustang Public School system and will begin teaching after graduation.

The evening ceremony began with the traditional “Pomp and Circumstance” processional performed by Dr. Stephen Weber, professor of music and chairman of the arts and humanities division. Graduating music majors Joshua Smith, of Blanchard, and Stephanie Goodwin, of Midwest City, performed Johannes Brahms’ First Sonata, Op. 120, No.1 Allegretto Grazioso as a piano and clarinet duet.

Copies of the ceremony will be available on DVD in the USAO Media and Community Relations office or by phone at 405-574-1318.

Receiving bachelor of science degrees were:

Receiving bachelor of arts degrees were: