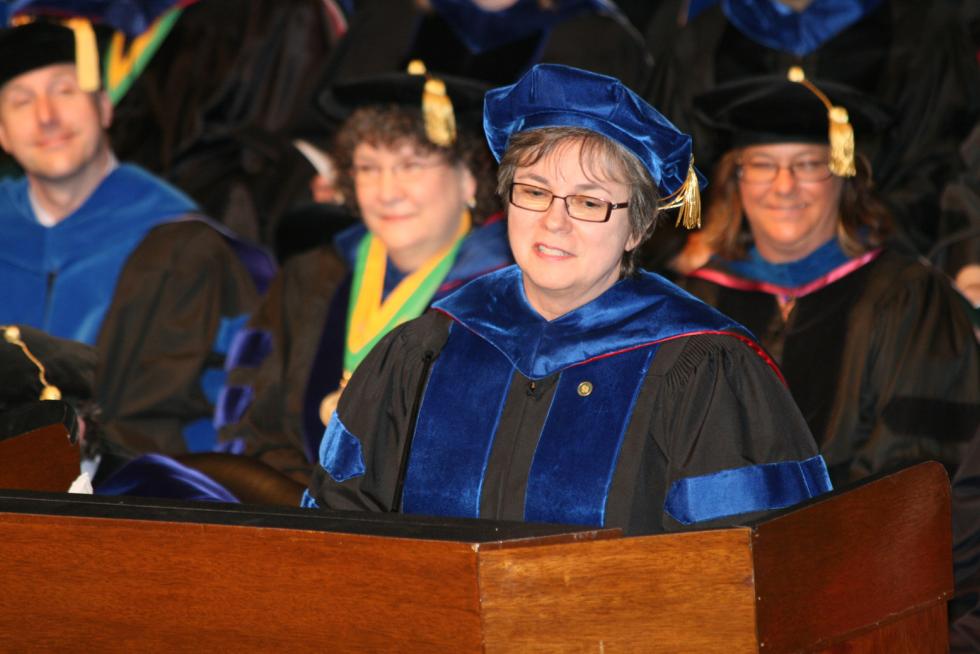 Comparing shared life stories and giving meaningful definition to “place,” Dr. Vicki Ferguson encouraged graduates that they are starting on a good foundation with a liberal arts degree during the spring commencement ceremony at the University of Science and Arts.

An education faculty member for most of 28 years, Fergusonaddressed 134 graduating seniors and their families at the ceremony April 23. She serves several roles as professor, director of teacher education and chair of the Division of Education and Speech-Language Pathology.

More than 1,500 people attended Friday night’s commencement in two ceremonies at the college – the third time a two-ceremony schedule has been used to alleviate overcrowding in Te Ata Memorial Auditorium.

"When I was approached with the awesome request to speak to you, my first reaction was probably not much different than yours when you came to the realization that you were actually going to graduate from college – my reaction: panic," Ferguson said.

"I began thinking about 'stories:' in particular, your story and my story.  We are at different 'places' in our stories, but our stories have many similarities.  My story started before yours and, yet when our stories are complete, they may not be much different in length.  Since my academic preparation was primarily in mathematics, I picture our stories as parallel truncated number lines that currently coincide at this place.

"Place is a word that communicates many different things.  Steven Pinker, a recent campus speaker in this very auditorium, inspired me to consider how words communicate and this word 'place' has special significance tonight.

"Place can be a physical location. Place can signify an event. Place can indicate a time in your life.

One of the most decorated graduates to ever walk the stage, Jacqueline (J.C.) Benda of Union City received the USAO Alumni Distinguished Graduate Award during Friday night’s commencement.  Benda graduated with a 4.0 GPA in biology/pre-med, while serving a long list of charities and several honor societies.  Presenting her the award is Alumni President Judy Ford of Shawnee.

"Although some of you in this spring graduating class reached this place in your life after previous work experiences, for most of you this 'place' is the place in your life that marks your crossing into expectations of adult life, of taking on the role of a productive citizen at a unique time in history," she said.

"It took me a while to be able to recognize the answer to the question – what good is a liberal arts education?  Was it a fluke that a kid growing up in Florida became a math major in Georgia, discovered a love of teaching math in Texas, and eventually became a director of teacher education in Oklahoma, or could my liberal arts education somehow have played a part?

"You will surely be quicker than I at answering that liberal arts question.  I predict you will discover that you see the world differently than many other people around you.  You may realize that you see the underlying question/solution in an important issue while others hone in on superficial aspects, that you see multiple dimensions while others see only the immediate problem.

Webcast of the 6 p.m. Ceremony

Webcast of the 8 p.m. Ceremony

"All of you may realize that this place where you are tonight was, in fact, a really good place to be.  So, as your story continues, in the words of the inimitable Dr. Seuss, 'Oh, the places you’ll go.'"

She has been a full-time member of the USAO faculty since 1988. She also was an instructor in the mathematics department at USAO from 1975-80 and an adjunct faculty member in the Division of Mathematics and Division of Education from 1987-88

Local businessman and USAO supporter Lonnie Jourdan received an honorary bachelor of liberal arts degree during the ceremony. Jourdan has been a friend to the university for nearly 20 years, giving most generously to scholarships, but also to capital projects like the Greek Theater and Owens Flag Plaza.  His leadership gift to restore the Home of the President in 2007 caused the USAO Board of Regents to rename the historic 1919 structure “The Jourdan House” in his honor.

A standing ovation greets benefactor Lonnie Jourdan during Friday night’s commencement ceremonies at USAO.  Jourdan received the first-ever Honorary Bachelor of Liberal Arts Degree for his leadership to the USAO Foundation, his dedication to service, and his generosity to students through scholarships. From left are USAO President John Feaver, commencement speaker Dr. Vicki Ferguson and Jourdan.

Benda graduated with a bachelor of science degree in biology/pre-med with a 4.0 grade point average. She plans to enlist in the Air Force and study medicine at the OU College of Medicine.

Benda also was a member of the USAO Ambassadors, the Biology and Associated Sciences Club, Colleges Against Cancer, the President's Leadership Council, the Student Activities Board, the Volunteer Action Council and the Women in Technology and Science group. She played a year of varsity basketball at USAO and volunteered for a list of charities.

Benda received the George Austin Award for Campus Leadership, was a George and Donna Nigh Scholar and has participated in several marathons.

In her recommendation, Dr. Jeannette Loutsch said, "She is a mature young woman with strong morals, unbound enthusiasm, unlimited dedication to USAO and a delight to be around." Loutsch is an assistant professor of biology.

Copies of the ceremony will be available on DVD for $15 plus tax in the USAO Media and Community Relations office or by phone at 405-574-1318.

Receiving bachelor of science degrees were:

Receiving bachelor of arts degrees were