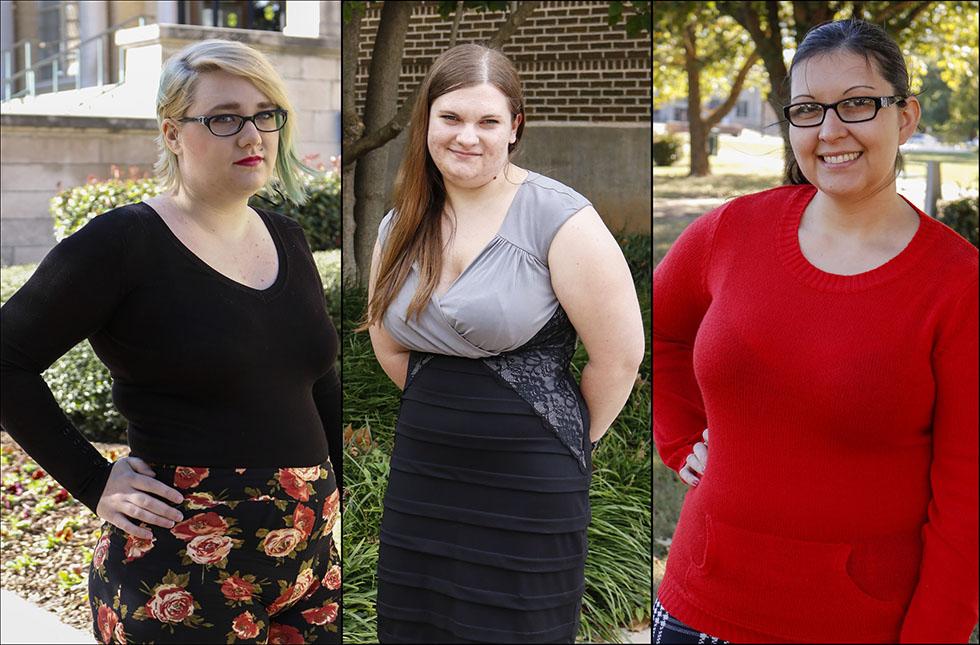 Three graduating art students will exhibit their work in a fall senior bachelor of fine arts show titled AXIOM at the University of Science and Arts of Oklahoma.

An opening reception is scheduled to begin at 7 p.m. Nov. 7 in the third floor Art Gallery in Davis Hall. The exhibit will run through Nov. 13.

The graduating artists participating in the show are Shauntel Cornaby, Sonja Ingram and Amanda Raymond.

“The BFA program is the most rigorous program at USAO,” said Jackie Knapp, associate professor of art and art department coordinator. “The artists exhibiting in “AXIOM” have worked diligently, producing high-quality work that serves as evidence of their individual concepts. Each has successfully investigated thought-provoking ideas with very diverse media. We are very proud of their artistic accomplishments and confident each will see success in the world. “

Mustang native Cornaby says that she has been drawing all her life. This love for art has followed her ever since.

At USAO, Cornaby is working toward a double major in art and math. Her BFA show will intertwine the two disciplines in a couple of different ways.

“Some people use it simply to create art without knowing how it works,” Cornaby said, “but I know how it works. I see behind the scenes.”

She will also combine the two disciplines together in the subject matter itself.

“My work is going to show math in an artistic way and art in a mathematical way.”

In her show, Cornaby used mathematical signs and other patterns in such as way that will transcend the math world and will become beautiful art.

Cornaby hopes to use both math and art in her life after graduation. She wants to pursue a career that focuses on her artistic abilities, while possibly also working as a freelance math tutor.

“I like the idea of an art job that allows me to be involved with the beginning stages of a project where ideas are still being bounced around, ideally be able to see a project start to finish” said Cornaby.

She wants to live by her little catch phrase “art by day, math by night.”

Ingram graduated in the top 15 percent of her class at Moore High School in 2012.  While in high school, she painted several murals for the school’s walls and organized her school’s participation in USAO’s annual chalk art festival.

During high school she went to Portfolio Day; an event where surrounding colleges come and view high school juniors’ and seniors’ art work.

Ingram caught the eye of USAO at this event.  However, she applied to the University of Oklahoma to study art. Yet, everything played out and she enrolled at USAO in fall 2012.

“I would not have received the foundations I got here [USAO] if I had gone to OU,” Ingram says.

In the fine arts program, Ingram focuses on graphic design. For AXIOM, she will be mixing graphic design and photography for her showcase.

Ingram claims that “it’s good to show versatility in mediums.”

Not only is she using a combination of different mediums, she will be using different dimensions. Her art pieces are printed on metal sheets and are meant to be seen through 3D glasses.

She wanted a way to “offer perspective on the truth,” as well as simply offering a different way to view the art

Her pieces won’t have frames around them, because she doesn’t want to constrict and “box them in” in any way.

Currently she is designing cover photos for Elevation: a fashion magazine out of Oklahoma City. Ingram’s short terms plans include designing for magazines. However, her dream career is in the video game world.

“My dream job would be with a video game company in graphic design and in their marketing efforts,” said Ingram.

After receiving her degree, she joined the Navy where she served for four years.

She then came to USAO – a school she had never heard of before. Raymond had an interest in photography, so she searched the internet for possible schools to attend. Once she found USAO and after talking to Jackie Knapp, associate professor of art, Raymond knew there wasn’t another school she wanted to attend.

Raymond received her bachelor’s degree in art and decided to come back and finish her BFA.

Raymond was diagnosed by the Department of Veterans Affairs with bipolar and post-traumatic stress disorders; from which she draws inspiration for her project.

Her emphasis for her show is photography; in which she will strive to portray a reality that she and many other live with on a daily basis.

“I’m trying to portray in my photos the different moods and words associated with bipolar,” said Raymond.  She explains that she is attempting to show “the highs and lows… the atmospheric aspect of the disease.”

Her photos are of nude models who are wrapped in chains.

“This portrays how bi-polar is something you can’t get rid of,” said Raymond.

Raymond is a single mother of two and is hoping to go to grad school for photography once leaving USAO.

USAO has been a big part of her educational life and her photography career.  “This [USAO] is my home. Even if I go to grad school, this will always be my home.”

More information about the show can be obtained by calling 574-1302.