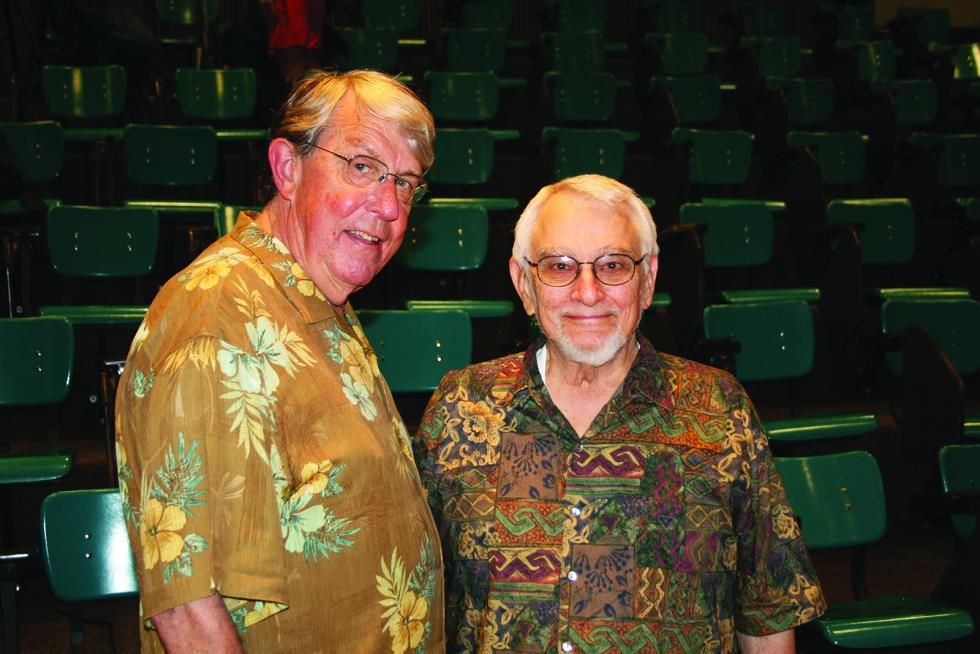 USAO President John Feaver (left) shares a moment with the late Robert Martin, the institution's president from 1967 to 1972, at a gathering in 2010 to celebrate legacy of the Oklahoma College for Liberal Arts.

Presiding over one of the most innovative and tumultuous periods in university history, Dr. Robert Martin shepherded the establishment of many of the institutions that make the University of Science and Arts what it is today in his four-year tenure as president. Martin died May 27 at his home in Norman. He was 85.

A memorial service is scheduled for 2 p.m. on June 8 at St. Michael’s Episcopal Church, at 1601 West Imhoff Road in Norman. Demuth Funeral Home in Oklahoma City is in charge of arrangements.

“The debt that USAO owes to Robert Martin can never be paid in full,” said USAO President John Feaver. “Dr. Martin guided the university through changes that seemed unthinkable at the time, and we have benefitted from his vision and will to execute those changes ever since.”

“Most of what we pride ourselves on today — our unwavering liberal arts mission, our interdisciplinary curriculum, our emphasis on team teaching — stemmed from Robert’s brief but brilliant tenure as president and would likely not exist in the Oklahoma higher education system without his leadership. He will be sorely missed.”

Martin was born on January 15, 1928 in Wichita Falls, Texas, where he completed his elementary and secondary education. His undergraduate degree was a B.A. in mathematics, taken at Texas Technological College in Lubbock, Texas. In 1959, he received his Ph.D. from the University of Oklahoma and accepted a position as assistant professor of history at Texas Christian University.

After five years, he moved to Arkansas State University as head of the Department of Social Sciences. In 1965, he became Dean of the College of Liberal Arts at Arkansas State.

A college dean at the University of Oklahoma once told the State Regents, “You can’t build a liberal arts college in Chickasha, Oklahoma.” When asked “Why?” the dean said, “The people won’t let you.”

Undaunted, Martin took up the challenge, and for the years between 1967 and 1972 proceeded to fashion a kind of institution that had never before been seen in Oklahoma higher education history. It was a blend of classical and modern, of daring young minds and experienced scholars, of things liberal and things conservative. As one OCLA scholar and historian put it, the college became a “sort of Camelot.”

Martin’s influence stimulated both students and faculty to rethink the past and challenge the future. Traditions were questioned. Hierarchy was discouraged; equality and democracy were affirmed. Team teaching among faculty members became common, and cooperation between faculty and students was emphasized.

Following his presidential tenure at OCLA, Martin accepted a position with the College of Continuing Education at the University of Oklahoma.

Martin returned to USAO in 2010 to participate in a panel discussion on the OCLA legacy along with several faculty members who were part of the academic revolution.

Shafer said there is no way that Martin could have known how deeply he affected her and her life at USAO.

“I will always think of this college as his college and whatever is commendable about it today as his legacy,” Shafer said. “I originally applied for the position because of his vision. Bob Martin didn’t just exemplify what I considered to be an ideal academic leader but he and his wife, Daisy, became wonderful ‘parents’ for a motely bunch of students and young faculty embarking on their academic careers.”