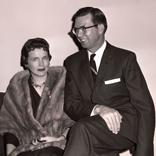 The seventh president of the University of Science and Arts of Oklahoma, Dr. Freeman Beets, passed away Sept. 29 at the age of 90.

A memorial service for Beets is scheduled Oct. 8 at 11 a.m. in the Chapel of Sevier Funeral Home, 702 W. Chickasha Avenue, in Chickasha.

Beets joined the Oklahoma College for Women as a professor of journalism and English in 1956. He served as the assistant to the president before becoming president of OCW (now USAO) in February 1958 following the resignation of Dr. Dan Procter. Beets had come from Hardin-Simmons University at Abilene, Texas, where he had been the director of admissions and records.

In November 1960, just shy of three years in office, President Beets resigned to accept a position with the Kansas City regional office of the Health, Education and Welfare Department. He finished his professional career with the Office of Education, then came home to spend his retirement years in Chickasha.

Beets was born in 1919 in Chickasha. He was a member of the Chickasha Rotary Club. In addition to OCW, he worked for the Baptist General Convention in Nashville.

Beets received his bachelor of journalism degree from the University of Oklahoma and later took master’s and doctor's degrees from OU in education. He enlisted in the United States Army during World War II and received a commission and a battlefield promotion from Second to First Lieutenant.  He earned a Bronze Star as well as a Purple Heart during his time in service. Margie, his wife, was a graduate of OCW.

He established the Freeman and Margaret Beets Scholarship in memory of his wife who died in 2001. Income from the endowment is used for scholarships, preferably for music students exhibiting some need at USAO.

Interment is scheduled at the Rose Hill Cemetery in Chickasha. Memorial contributions may be made to the Freeman and Margaret Beets Scholarship at USAO or the Parkinson's Research Fund.

Dr. Freeman Beets with his wife Margaret at the Oklahoma College for Women in 1960. Beets served as president of OCW (now USAO) for almost three years. Margaret was a 1941 graduate of OCW.