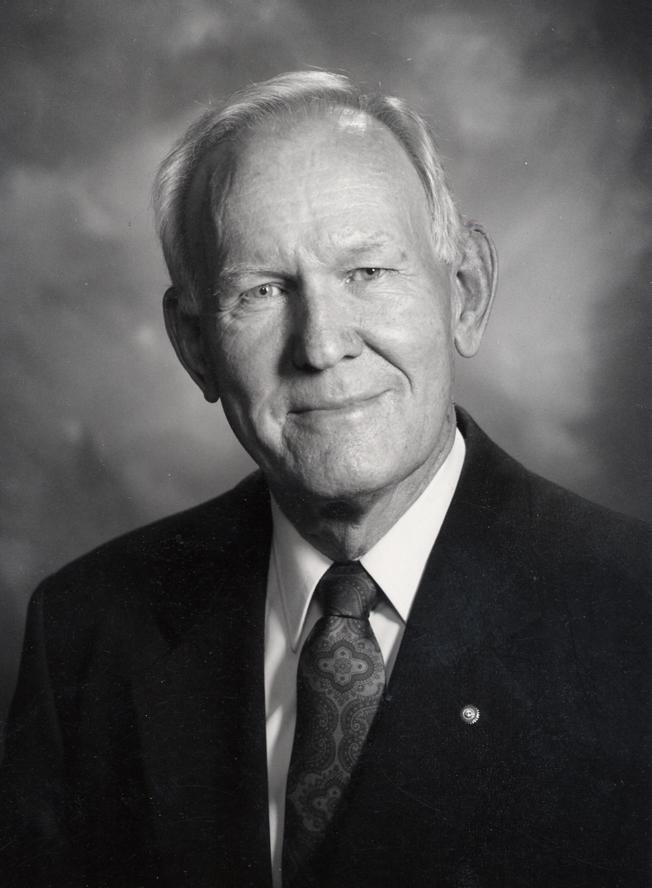 The longest tenured president in the college’s history, Roy Troutt, will be remembered as the fiercely independent leader who provided a quarter century of stability at the helm of the University of Science and Arts of Oklahoma. Troutt died late Friday at Norman Regional Hospital after a brief illness. He was 87.

Services are scheduled Tuesday at 1 p.m. at the USAO Alumni Chapel. Officiating will be the Rev. Bob Rice, pastor of the First Presbyterian Church of Norman. Interment is scheduled at Fairlawn Cemetery in Chickasha.

“USAO has lost a great leader and Oklahoma has lost a proud public servant,” said USAO President John Feaver on Saturday. “Roy Troutt was a mentor and friend. I worked 20 years for him in various roles and learned immeasurably from his strong and compassionate leadership. He has left an indelible mark on the institution’s legacy, having served exactly one quarter of its hundred years of service to the state of Oklahoma. It would be impossible to tell the university’s story without telling Roy’s. Its modern success is a tribute to his service and devotion. The college family was his family.” Flags have been lowered to half staff on campus in Troutt’s memory.

A native Oklahoman, he attended Durant Public Schools, received his bachelor's degree at Southeastern Oklahoma State University and master's and doctor's degrees from the University of Oklahoma.

Retiring from USAO in 2000, Roy Troutt’s 60-year career in Oklahoma education spanned seven decades, 11 U.S. presidents and 13 Oklahoma governors. His presidential colleagues from other institutions dubbed him the "dean of college presidents."

Under his leadership, USAO refined it signature liberal arts curriculum, regained unconditional accreditation and earned its first national ranking for academic quality in U.S. News and World Report. He led the school through the lean 1970s after changing to coeducational status, through the oil bust of the 1980s and to revitalization in the 1990s, when Sparks Hall was redesigned and the Student Center got an elaborate makeover. In his honor, the USAO Board of Regents christened the school's Administration Building "Troutt Hall" in the fall of 1995.

When the Oklahoma Higher Education Hall of Fame was created in 1994, Troutt was named among the first inductees that inaugural year. Earlier that year, he received the Distinguished Alumnus Award at Southeastern Oklahoma State University, from which he earned his bachelor's degree in 1941. In 2000, the Ardmore Public School Foundation named Troutt among the first inductees to its new hall of fame.

Before coming to Chickasha, Troutt was dean of the College of Liberal Studies at the University of Oklahoma. Before that, he was chairman of the Department of Education and Psychology at Southeastern Oklahoma State University, and a teacher, coach, and administrator in the Ardmore City Schools.

Throughout his career, Troutt has also served in many civic organizations. He was past president of the Ardmore United Fund, Inc., and the Ardmore YMCA. He was a member of the board of directors of the Chickasha Chamber of Commerce and the Salvation Army. He served for many years as chairman of the board of the Jane Brooks School for the Deaf in Chickasha. Troutt is a past district governor of Rotary District 5770 and past international director of Rotary International. For his support of international humanitarian and education programs, Troutt received the Citation for Meritorious Service and the Distinguished Service Award of the Rotary Foundation. Locally, the Chickasha Rotary Club honored Troutt with a Meritorious Service Award for 20 years of service to the club. He traveled six continents as an ambassador for Rotary, attending its international activities and speaking at its events.

A decorated veteran of World War II, Troutt established an expertise in the handling and disposing of explosives. During a tour of duty in the Pacific, Troutt employed his training during the famed Leyte Invasion in the Philippines and during invasions of other Pacific islands. Then, in Washington D.C., he headed the research division of the Navy Bomb Disposal School until the War ended in 1945. For his service in the Navy, Troutt earned the Bronze Star and other citations.

His higher education leadership in Oklahoma became a resource to other colleges across America because he served as a consultant-evaluator for the North Central Association Commission on Institutions of Higher Education. He visited many college campuses across the country helping them to achieve accreditation.

He was married for 60 years to the late Nancy "Ruth" Stone Troutt of Fort Worth, who preceded him death on April 27, 2003.

Memorials may be made to the USAO Foundation's Roy & Ruth Troutt Fund, created to honor outstanding students through scholarships and public service awards. The Foundation's address is 1727 West Alabama, Chickasha OK 73018-5322.

Services are under the direction of Ferguson Funeral Home of Chickasha.