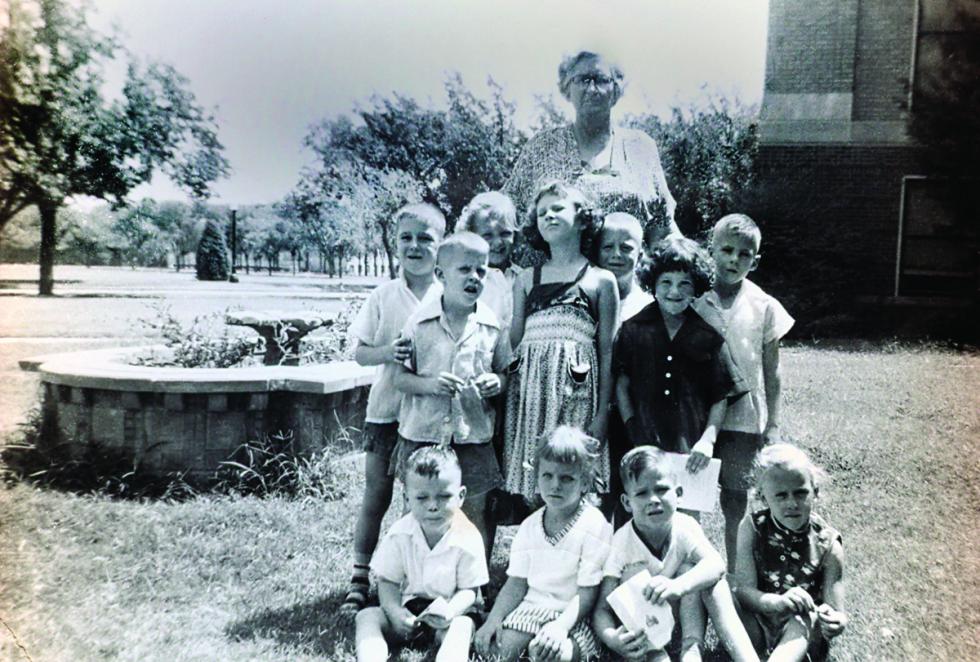 Dollie Fortenberry McDonald shepherds a group of children from the Jane Brooks School for the Deaf for a group photo near Willard Hall in 1955. The Jane Brooks School was housed on the campus of the present-day University of Science and Arts from 1953 through 1970. McDonald is memorialized in a new scholarship for deaf education majors.

Chickasha residents Phillip and Kay Neill Wint have established a new annual scholarship honoring Dollie Fortenberry McDonald, a long-time housemother at the Jane Brooks School for the Deaf. It is available only to junior or seniors majoring in deaf education at the University of Science and Arts.

The scholarship covers the cost of room, board, books, tuition, and related fees for the recipient minus the amount applied to these costs through other University, state, and/or federal grant and scholarship sources. In short, it covers most things not covered by other aid.

Born in Arkansas in 1896, McDonald’s family moved to Plainview, Texas, when she was still an infant. After statehood, the family traveled by covered wagon to join relatives in Davis, Okla., where her father worked the land as a farmer. Raised in a family of five girls and three boys, McDonald learned the value of hard work early in life. In addition to attending school through the eighth grade, she learned the meaning of hard work on the family farm.

McDonald married in 1915 and eventually settled in the Lindsay area where her husband worked the land as a farmer. In 1919, she gave birth to Chickasha resident Harriet Neill, the mother of Kay Neill Wint. In 1929, she gave birth to triplets – three boys – which was a rarity and brought visitors from all around. Without benefit of incubators, the premature babies were kept on the open oven door for warmth.

In the early 1950s, McDonald moved to Chickasha to live with her daughter, Harriet Neill and her husband, Oklahoma State Senator Jack Neill.

“We were thrilled to have her with us,” Harriet Neill said, “but it wasn’t in Mother’s nature to sit around idle.”

Though her own children were out of the house, McDonald found an outlet for her well-honed skills as a caregiver when the Jane Brooks School for the Deaf moved to the campus of the Oklahoma College for Women in 1953. McDonald was hired on as a housemother for the children at the school. Nearly all of the children were living apart from their parents in order to gain valuable skills that could not be acquired in their hometowns around the nation.

McDonald spent more than 25 years caring for the residents of the Jane Brooks school, many of whom attended her funeral after her death at age 96.

In order to qualify for the Dollie Fortenberry McDonald scholarship, applicants must meet a number of criteria. He or she must be a second-generation resident of Oklahoma participate in a campus activity (performance groups, student government, clubs) and maintain 3.0 grade average.

Students interested in applying for the scholarship should visit Nancy Moats, director of financial aid, at 574-1251, or apply in person in the financial aid office in Troutt Hall 112.