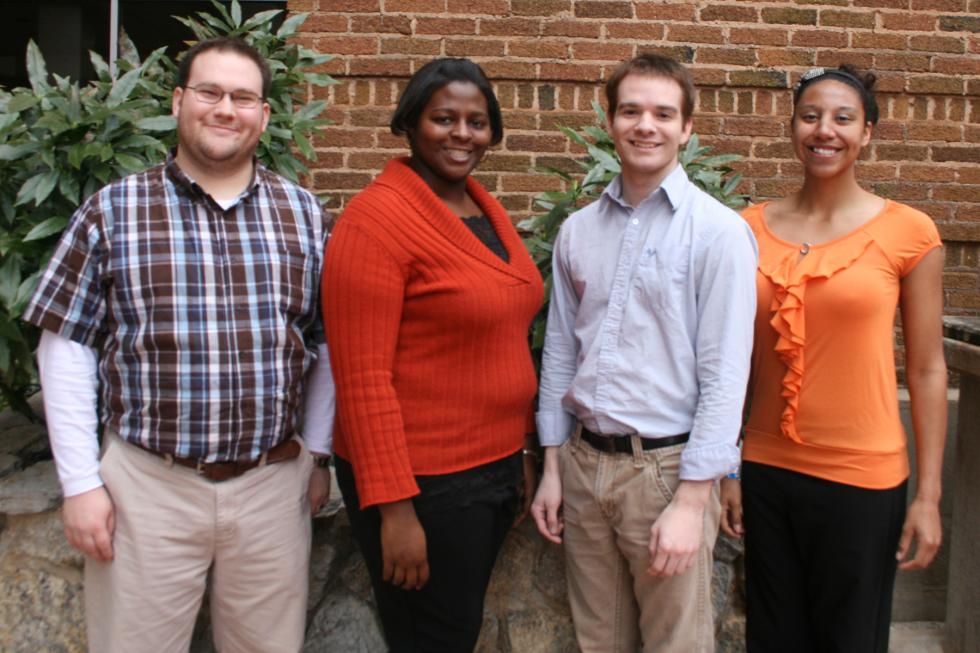 Four students from the University of Science and Arts of Oklahoma have been named to the 2011 Oklahoma Choral Director’s Association Collegiate Honor Chorus. The students, Jalisa Lyons, soprano, Tashina Ototivo, alto, Joshua Smith, tenor and T. Alexander McCabe, will participate in master classes and rehearsals as well as a final performance at the First Christian Church in Edmond on March 25-26, 2011.

Ms. Lyons, is a music performance major from Anadarko. She is a member of the USAO Concert Choir, Wind and Vocal Jazz Ensembles. Currently, Ms. Lyons serves as Minister of Music at St. Paul’s Methodist Church in Anadarko. Ms. Lyons is presenting a Senior Voice Recital, which is free and open to the public, on March 3 at 7:30 p.m. in the USAO Alumni Chapel. While a student at USAO, Ms. Lyons has been an active member of the University Musician’s Club. She is a student conductor and soprano section leader for the USAO Concert Choir.

A graduate of Walters High School, Ms. Tashina Ototivo is a double major in Music Education and Psychology. She sings alto in the USAO Concert Choir and takes private instruction in voice, piano and guitar. Ms. Ototivo maintains a hectic schedule as President of the sophomore class, Freshman Orientation student leader and member of the USAO ladies’ basketball and softball teams. She is also an academic scholar who is consistently and regularly named to the USAO Honor Roll.

Mr. Joshua Smith, tenor, will not only sing with the honor chorus, but he also will participate in the Conducting Masterclass. A senior Music Performance major, Mr. Smith is an accomplished singer and keyboardist. Presently, he serves as the Minister of Music at the First Baptist Church in Minco as well as a studio instructor in piano. Mr. Smith performs regularly with the USAO Vocal Jazz Ensemble and is a student conductor with the USAO Concert Choir. He will graduate in December 2011, and wishes to continue his studies at the graduate level in Conducting.

McCabe is a baritone seeking his degree in music education. As a member of the concert choir, he serves as both tenor section leader and as a student conductor. He also performs in the jazz ensemble. Currently serving as the president of the University Musicians club, McCabe is also the minister of music for the First Baptist in Amber.

He has appeared as a soloist for many community events. Mr. McCabe is seeking a degree in Vocal and Instrumental Music Education. He hopes to one day teach in the public schools.

The guest clinician for the OCDA Collegiate Honor Chorus is Ms. Doreen Rao, a noted conductor currently serving on the faculty at the University of Toronto. She has titled the concert, “Visions of Peace From The North: All-Canadian Choral Music”. Dr. Rao will also lead the conducting masterclass with auditioned student conductors, including Mr. Joshua Smith. The Honor Choir will spend two days in rehearsals with students from over twenty Oklahoma public and private universities.

The event will conclude with a public performance at the First Christian Church in Edmond on Saturday, March 26 at 3:30pm.