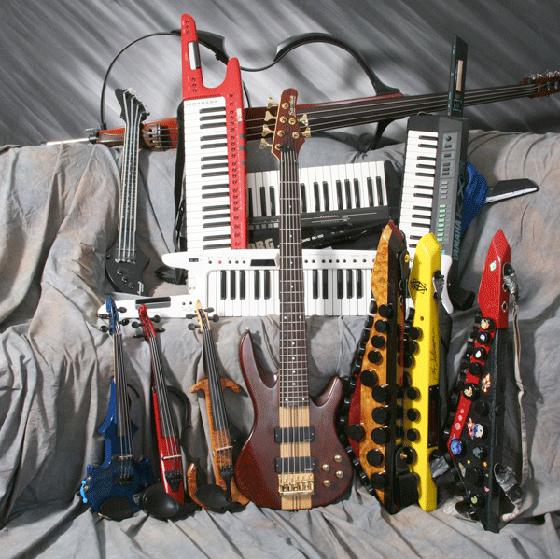 CHICKASHA – What if classical composer Johann Sebastian Bach traveled to the future and picked up an electronic keyboard? Jazz combo Bach to the Future will attempt to answer this question with their modern, electronic approach to classical music Feb. 27 at the University of Science and Arts.

Bach to the Future fuses traditional, classical pieces with modern jazz influences to create “new” old favorites. Using modern electronic instruments including the drumitar, MIDI electric violin and synthesizers, they transform famous classical melodies of Bach and other composers into jazz, Latin and other contemporary rhythms and styles.

Bach to the Future’s concert is the final performance of this season’s Davis Waldorf Performing Arts Series (DWPAS) at the University. The show begins at 7:30 p.m. in the Te Ata Memorial Auditorium. Tickets range from $3-10 at the door.

Dr. Ken Bohannon, associate professor of music and coordinator for DWPAS, said he was intrigued by the quartet’s instrumentation.

“I’m looking forward to hearing a drumitar,” Bohannon said. “I’ve never seen one, heard one or touched one; I don’t even know what it is! This should be an interesting twist on some music from one of the great masters, J.S. Bach.”

Quirky and energetic, the self-proclaimed “Bach that rocks” ensemble sheds a contemporary light on classic Bach favorites like “Jesu, Joy of Man’s Desiring” and “Air on the G String.” Calling on world music influences, the jazz combo often mimics cultural music themes, such as Greek and West African rhythms.

Band members include Rob Silverman on drums and Zendrum, Mike Silverman on keyboards, Matt Bollinger on six-string bass and Andrew Driscoll on violin.

The quartet also performs selections by other classical composers, such as J.S. Bach’s son, Carl Phillip Emanuel Bach. Their rendition of his “Solfeggietto” tips a nod to jazz piano legend Chick Corea.

So far, Bach to the Future has sold more 100,000 albums on its own label, Time Machine Records, and have shared the stage with the likes of David Sanborn, Peter Cincotti, the Rippingtons, Eric Marienthal, Al DiMeola, Stanley Jordan, David Benoit, Michael Franks and the Yellowjackets.

Bach to the Future also performs regularly as the house band on the WB Network’s “The Fan Show.”

In addition to concert performances, the quartet leads guest master classes and music education clinics. A special daytime performance and master class for USAO students will be announced soon.

Bach to the Future’s self-titled CD is available on Tower Records and iTunes.

More information about the band is available online at www.bachtothefuture.net.

Tickets for the concert are $10 for general public, $8 for seniors 60 and above, $3 for high school students and children under 18, $5 for USAO staff or faculty and $2 for USAO students. Tickets are available through the USAO Box Office in Troutt Hall or by phone at (405) 574-1213.