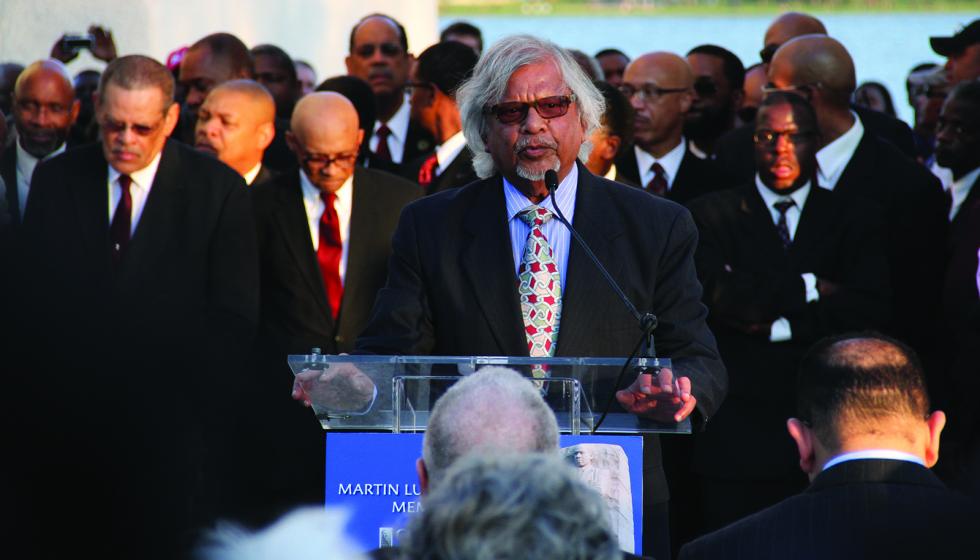 Arun Gandhi speaks at the Martin Luther King Memorial in Washington, D.C. on the 44th anniversary of Dr. King’s assassination in 2012. Gandhi will deliver the keynote address for the 5th annual Giles Symposium for Citizenship and Public Service beginning at 7:30 p.m. on Oct. 25 in Te Ata Memorial Auditorium on the campus of the University of Science and Arts in Chickasha.

Arun Gandhi spent two years during his teens living with his grandfather, Mahatma Gandhi, learning firsthand about the challenges and triumphs of advocating for non-violent change.

These beliefs were directly challenged on January 30, 1948 when an assassin took his grandfather’s life but, from that day forward, Arun Gandhi dedicated his life and passion to ending senseless violence throughout the world.

Gandhi is scheduled to deliver the keynote address at 7:30 p.m. Oct. 25 at the fifth annual Ray and Mary Giles Symposium for Citizenship and Public Service at the University of Science and Arts of Oklahoma.

Earlier that afternoon, Gandhi will join three speakers in a panel titled “Advocating for the Voiceless.” Each of the three presenters will highlight efforts in Oklahoma to bring attention and aid to those who are pushed to the margins of society.

Panelists include Brandon Pasley, program manager for the Address Confidentiality Program in the Oklahoma Attorney General’s office; Dan Straughan, executive director of the Homeless Alliance; and Tania Walsh, with the Department of Mental Health and Substance Abuse Services.

The moderator for the panel discussion is Dr. Jennifer Long, professor of economics and director of the Interdisciplinary Studies program at USAO.

The panel is scheduled for 2 p.m. in the USAO Ballroom, which is located on the second floor of the Student Center.

Admission to both events is free and open to the public thanks to generous support from the USAO Foundation through the Ray and Mary Giles Fund.

Exposed to violence from a young age while growing up in South Africa, Gandhi had to confront his own desire for revenge and, in time, displace it with a quest for justice.

Working for 30 years as a journalist for The Times of India, Gandhi, along with his late wife, Sunanda, created projects designed to aid the socially and economically oppressed in India. In the late 1980s, the couple came to the United States and founded the M.K. Gandhi Institute for Nonviolence, which seeks ways to apply the principles of non-violence to social problems.

Today, Gandhi remains dedicated to spreading the message of non-violent change by sharing his message of peace with audiences all over the world.

Dr. Chris Walker, associate professor of psychology and chairman of the Giles Symposium committee, considers Gandhi’s life and message to be the perfect fit for the annual symposium.

“Arun Gandhi has experienced the violence and oppression of institutionalized racism firsthand and has dedicated his life to lifting others out of similar situations through his writing and advocacy.”

More information about the Giles Symposium on Citizenship and Public Service is available at /giles-symposium.