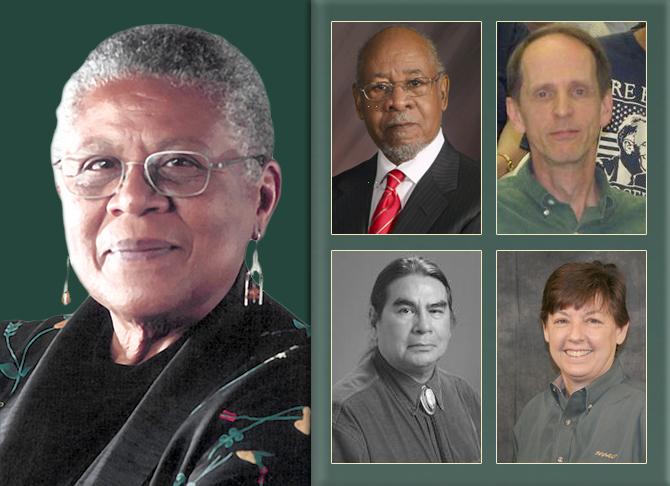 Some people believe the American civil rights movement started with Martin Luther King Jr. in the 1960s, but courageous citizens were fighting indispensable battles for social justice years earlier. One of those fighters was Minnijean Brown Trickey, a member of the “Little Rock Nine.”

Trickey will deliver the keynote address at 7:30 p.m. Oct. 7 in Chickasha at the third annual Ray and Mary Giles Symposium on Citizenship and Public Service at the University of Science and Arts.

Earlier that afternoon, Trickey will join three speakers who bring unique perspectives to discuss the status of the civil rights movement in Oklahoma. Among those voices is Dr. George Henderson, a prominent member of the University of Oklahoma faculty; Dr. Richard Allen, a policy analyst for the Cherokee Nation; and James Nimmo, an advocate for gay and lesbian rights.

Moderator for the panel discussion is Kelly Brown, director of Nash Library. The 2 p.m. event in Davis Hall Amphitheater is open to all. Admission is free.

Trickey’s public lecture is scheduled at 7:30 p.m. in Te Ata Memorial Auditorium. Admission is free thanks to generous support from the USAO Foundation through the Ray and Mary Giles Fund.

Trickey became a key player in the civil rights movement as a teenager, when she claimed her right to attend newly desegregated Little Rock Central High School. It was 1957, three years after the Brown v. Board of Education verdict that deemed “separate but equal” unconstitutional, and resistance to school integration was running high. Little Rock became a national focal point in the ongoing struggle for civil rights, and President Dwight D. Eisenhower sent federal troops to escort Trickey and eight other African American students through a hostile white crowd. These students became known as the “Little Rock Nine.”

Despite the support of the federal government, racial tensions continued at Central High. The African American students were ridiculed and bullied by white students. Trickey’s attempts to stand up to the abuse led to a suspension and eventually expulsion from Central High. She finished high school in New York.

Trickey attended Southern Illinois University and majored in journalism. She later moved to Canada with her husband, where she earned a BSW in native human services from Laurentian University and an MSW in social work from Carleton University in Ontario. She raised her six children in Ontario.

Trickey has devoted her life to social and racial justice.  She served in the Clinton Administration as deputy assistant secretary for workforce diversity at the Department of the Interior. She also was awarded the Lifetime Achievement Tribute by the Canadian Race Relations Foundation; the International Wolf Project Award for work promoting racial harmony; the NAACP Spingarn Medal; the Congressional Gold Medal; and a medal from the W.E.B. DuBois Institute.

Additionally, she has been the subject of two documentaries: Journey to Little Rock: The Untold Story of Minnijean Brown Trickey and Little Rock: 50 Years Later.

“Panelists for the 2010 Giles Symposium include remarkable individuals from the region and their realization of social and political change,” said symposium committee Chairman Dr. Chris Walker.  “We are distinctly privileged to host, along with Minnijean Brown Trickey, these gifted voices in the civil rights arena.”

Since he joined the OU faculty in 1967, Dr. George Henderson’s name has become synonymous with efforts to promote ethnic diversity and interracial understanding on the OU campus and throughout the country. In 2010, the university added to the pioneering professor’s many honors by assigning his name to the newly created Henderson Scholars Program.

He is the author of at least 29 books, including Our Souls to Keep, an introduction to African-American culture written primarily for white readers. The author donated the royalties from this book to scholarships for low-income students. His newest volume is a memoir, Race and the University, published in 2010, which chronicles his own story as he broke racial barriers in Oklahoma. In 2003, Henderson was named to the Oklahoma Higher Education Hall Of Fame and the Oklahoma Hall of Fame.

James Nimmo is treasurer for the Central Oklahoma Stonewall Democrats and is active in GLTB rights issues. He ran for Oklahoma City School Board in 2005 and has fought against library censorship. He has been employed with the Metropolitan Library System for 17 years. An active blogger on progressive issues and a regular contributor to The American Chronicle, Nimmo also writes for several websites including OpEdNews and The Oklahoma Observer.

Dr. Richard Allen is a policy analyst for the Cherokee Nation. He has spent almost 30 years working with the Cherokee nation and its government to better relate the history of the Cherokees.

Allen has written much legislation to support the Cherokees, and is a member of the Native American Graves Protection agency. He earned his master’s degree from the University of Oklahoma and completed his doctorate at the University of Arkansas. Allen is a veteran of the U.S. Marine Corps. He also serves as a liaison to the U.S. Armed Forces to raise awareness of Native American contributions to military history.

More information about the Giles Symposium on Citizenship and Public Service is available at usao.edu/giles-symposium.