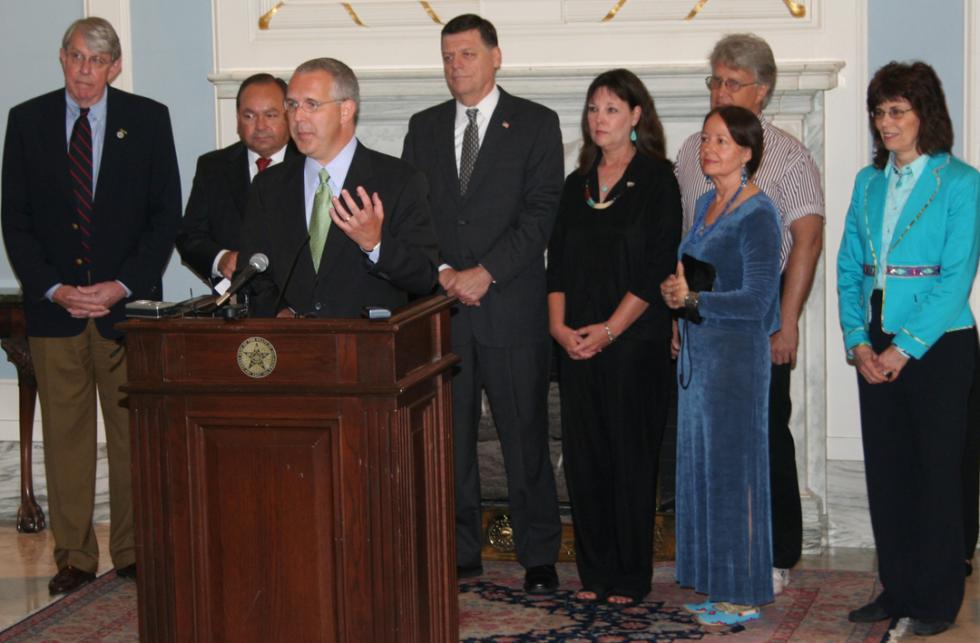 U.S. Congressman Tom Cole joined Gov. Brad Henry and a host of state and tribal dignitaries on Wednesday to honor the memory and legacy of one of Oklahoma’s most notable historical figures – and the story of her life. Native Chickasaw storyteller Te Ata Fisher (1895-1995) toured nationally and overseas as a solo performer for more than 70 years. Eleven years after her death, the story of her life is coming to the stage.

A press conference held in the Blue Room of the State Capitol joined media members with state and federal politicians in a tribute commencing the official kick-off and state endorsement of “Te Ata,” an off-Broadway play with music. Based on the real life story of Te Ata Fisher, the play runs Aug. 5-13 at the University of Science and Arts in Chickasha.

Joining the governor at the podium were Chickasaw Gov. Bill Anoatubby and USAO President John Feaver, along with “Te Ata” playwright JudyLee Oliva and cast members. Henry, who served as emcee for the event, said that the story of the storyteller warrants statewide attention.

“It is most important, as we celebrate our great state’s first 100 years, that we remember and highlight the lives of those Oklahomans who really made this a great state,” said Henry. Te Ata’s story of overcoming racial boundaries, he said, make her an important historic figure for the state.

Born and raised in Tishomingo, Te Ata attended school at the Oklahoma College for Women in Chickasha (now USAO). Upon her graduation, she moved to the east coast and appeared in several Broadway productions. It was there that she developed her one-person show, drawing on her Native heritage and inspiring in those that she met a “love for what is beautiful,” as she said.

Throughout her lifetime, Te Ata performed for audiences worldwide including the White House, where President and Mrs. Franklin D. Roosevelt, King George VI and the Queen of England viewed her celebration of Native culture. She eventually married a white man, Dr. Clyde Fisher, curator of the Hyde Planetarium in New York. Among Fisher’s personal friends was famous physicist Albert Einstein.

An award-winner by her own right, Oliva has written nearly 30 plays and was named one of the “Dynamic Chickasaw Women of 2005” by The Chickasaw Nation. Alongside Oliva at the conference were members of the cast Donna Couteau Brooks and Scott Stoney, as well as director Sherry Landrum and members of Te Ata’s family.

Tom Cole said that Te Ata, his aunt, was an important part of his family life.

“I grew up my whole life with Te Ata,” Cole said. “She was the great matriarch in the family.”

John Feaver praised Oliva for capturing the essence of Oklahoma’s beloved storyteller and a favorite alumna of the college, class of 1919.

“As one of our most distinguished and globally recognized alums, she’s a part of our family,” Feaver said. “She returned many times to USAO, was a dear friend of the college and we are honored to pay tribute to this extraordinary cultural ambassador.”

Members of the Chickasaw Nation gathered also to honor the legacy of the woman who was inducted into their Hall of Fame in 1991.

“She was a great ambassador for the Chickasaw people, but for all Indian people as well,” said Anoatubby.

On a massive stage designed by nationally renowned imagineer Robert Cothran, Te Ata comes back to life in the form of two characters: a younger and an older form of herself.

Elder Te Ata is performed by Donna Brooks, a Sac & Fax storyteller from New York who has performed in off-Broadway shows and film. She and her husband have performed at the Smithsonian and were selected as two of 14 storytellers representing the Western Hemisphere.

Ironically, Dayton, Ohio-based Scott Stoney plays Dr. Clyde Fisher, who originated from Ohio. Throughout Stoney’s 20 years as a professional actor, he has toured overseas in Germany, the Netherlands and France, and is in his 20th year as a resident artist in Dayton.

Tickets for the production are on sale at the USAO Box Office at (405) 574-1213 or online at www.TeAtaWorldPremiere.com