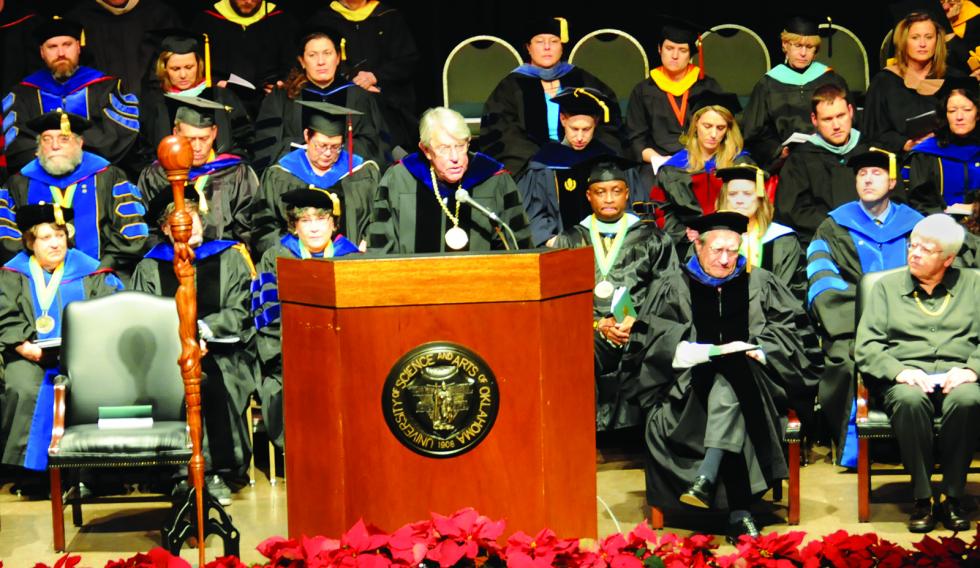 Adam Bryant of Tuttle, center, is congratulated by faculty after he received the Alumni Association Distinguished Graduate Award during Friday’s commencement at USAO. Bryant graduated with bachelor of arts degrees in music and theatre arts. With him are Dr. Dan Hanson, professor of music; and Dr. Ken Bohannon, associate professor of music.

CHICKASHA – The importance of a college education as a tool for economic advantage – finding a job – must not overshadow its role in shaping citizens engaged in a democratic republic, cautioned President John Feaver on Friday night as he addressed graduates and well-wishers in the Fall commencement ceremony honoring 72 graduates at the University of Science and Arts.

“While it is an education that available data suggests will prove to be highly successful in serving to promote your economic and financial future, each of you has many needs, thoughts and aspirations,” Feaver said. “We fervently hope in your time with us that you have gained vital insights into the moral, spiritual, mental, social and physical lives that you lead and will lead for the rest of your lives.”

“It is unusual for two faculty members to collaborate on a letter of nomination, but in this case, the student being nominated is equally remarkable,” said Dr. Stephen Weber, chair of the Division of Arts and Humanities and Katie Davis, associate professor of theatre arts. “He (Adam) models the inquisitive and well-rounded student we seek to graduate at USAO. He models, for other students, an exceptional work ethic, dedication, an ongoing zeal for knowledge and a quest for high achievement in all of his undertakings.”

While at USAO, Bryant was a member of the Concert Choir, Concert Band, Key Players and Vocal Jazz Ensemble. He appeared in six theater productions, one Chickasha Community Theater production and in a Service Learning project.

He was the music director/conductor for the Chickasha Community Theater’s production of Willy Wonka, and the composer/accompanist for USAO’s Far Away and Heine Style’s production of A Shot in the Dark. Bryant also served as the music coordinator/emcee for the 2012 Rock Island Arts Festival. He is a member of the USAO Hypatia Honor Society and the National Honor Society for Theater, Alpha Psi Omega.

Art major Wendy Chambers, of Wayne, received the distinction of outstanding graduate from the division of arts and humanities.

Tyler Porter, a political science major from Earlsboro, was named the outstanding graduate from the division of business and social sciences.

The division of education and speech pathology bestowed their distinction on Jessalynne Goble, an elementary education major from Tucson, Ariz.

The evening ceremony began with the traditional “Pomp and Circumstance” processional performed by Dr. Stephen Weber, professor of music and chairman of the arts and humanities division.

The USAO Chamber Choir, under the direction of Dr. Jan Hanson, professor of music, performed David Lantz’ “Closer to the Flame.”

The choir was accompanied by Adam Bryant on guitar; Bret Embry, a freshman music major from Chickasha, on bass guitar; freshman Linda Savinova, a native of Russia pursuing a degree in communication, on violin; and Rhenada Finch, instructor of music, on piano.

For persons who missed the ceremony, it can be viewed online at usao.edu / graduation-stream. Copies of the ceremony also are available on DVD in the USAO Media and Community Relations office or by phone at 405-574-1318.