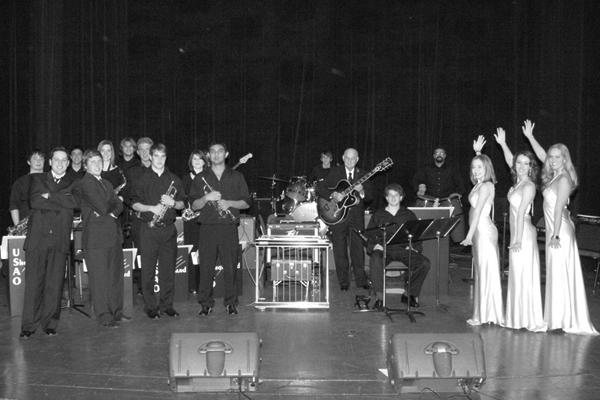 The USAO ShowBand combines blues, big band, pop and more with its annual fall concert Nov. 21 at 7:30 p.m. in the Te Ata Memorial Auditorium. Special guest guitarist Rick McRae joins the student band during the evening. The concert is free and open to the public.

Guitarist Rick McRae will be the special guest as the ShowBand at the University of Science and Arts presents its fall concert Nov. 21 at 7:30 p.m. in Te Ata Memorial Auditorium. McRae is the lead guitarist for George Strait’s Ace in the Hole Band.

The Ace in the Hole Band got its start in Texas around 1975. George Strait and the band started working together in the early 1980s. McRae joined the group during this time.

McRae says his early musical influences include Bob Wills, Buck Owens and Merle Haggard. “All of the musicians on the country shows on TV and the great road bands like Ernest Tubb’s band and Hank Thompson’s band influenced my music style,” McRae said.

“I guess I am a total guitar nut. I love all the different aspects and sounds that they make. I guess that is why I have so many guitars. I like to play my electric classical guitar a lot. I have recently started to learn more bluegrass flat-picking too – that will keep me a busy man,” McRae said.

In addition to McRae, other guests include Ukie Hart, piano; Ukie Hart Jr., bass, and USAO professor of music Dr. Dan Hanson on the drums.

Over the past few years, the USAO ShowBand has gained a reputation for combining pop, blues, big band, jazz and country styles into soulful and energetic performances.

Under the direction of guitarist Joe Settlemires, the youngest surviving member of the Texas Playboys, the ShowBand has performed across the state as ambassadors to USAO for more than five years. A noted musician in his own right, Settlemires has been inducted into four musical halls of fame, including three western swing organizations. Settlemires arranges all the music and directs the ShowBand with the assistance of his wife, Donna.

The ShowBand features brass, rhythm section, drums and five vocalists. “I’ve worked with many professionals in my life, but working with the students at USAO is truly an honor. The group of students in the band is dedicated and truly want to learn the craft,” Settlemires said.

In 2007, the ShowBand released its first CD, an album recorded and produced in Nashville by Bradley. The CD is for sale in the USAO Bookstore for $15 and online from several sources.