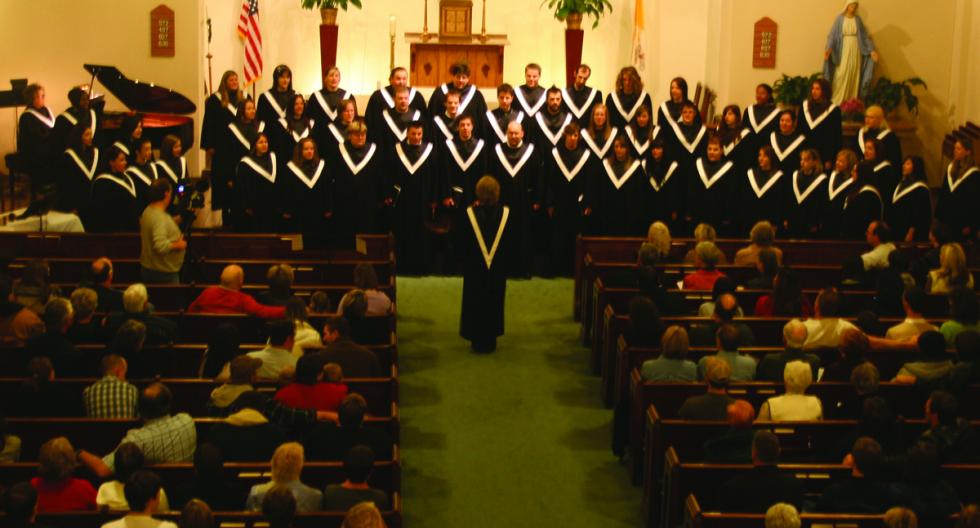 More than 100 voices will fill two historical venues as the choirs of the University of Science and Arts and Guthrie High School combine to present two concerts on Nov. 14 and Nov. 17.

The first concert is scheduled to take place at 7:30 p.m. in Te Ata Memorial Auditorium on the campus of USAO in Chickasha and the second at 7 p.m. in the Scottish Rite Masonic Temple in Guthrie. Both performances will be free and open to the public.

The concert will mark the first time that the two choral ensembles have performed together. In the past, the USAO Concert Choir has collaborated with university and public school choirs in joint performances of traditional holiday music and major works. The Guthrie High School Concert Choir has performed with elementary and secondary choral ensembles and local community choruses.

The GHS Concert Choir performs under the direction of Bill Perring, who has served at GHS for 17 years where he also directs the men’s and women’s choruses, Kantorei, Victorian Singers and Rhythm and Blues. Perring has directed and produced many musicals at GHS, including Annie, Beauty and the Beast and Seussical.

Perring was named Guthrie High School Teacher of the Year for 1999-2000.

The USAO Concert Choir will perform music in a number of different styles including “Harper’s Creek,” a bluegrass number featuring fiddle, washboard and spoon accompaniment, Franz Schubert’s “Holy is the Lord,” sung in German and a selection of new music by living American composers including Greg Gilpin’s “The Long Day Closes” and “The Lake Isle Of Innisfree” by David Brunner.

Dr. Jan Hanson, professor of music, is the conductor of the USAO Concert Choir. Beginning her 25th year of service, Hanson has directed the USAO Chamber Choir, Show Choir and dozens of musical productions. Hanson has appeared as a guest conductor, adjudicator and clinician for numerous festivals, competitions, schools and professional organizations.

Hanson has been invited to present in spring 2012 at the Southwest Oklahoma American Choral Director’s Association annual convention in Dallas.

“I was thrilled when Bill Perring and I were able to work out the details to make these concerts happen. With one of Oklahoma’s longest running music programs, USAO is always looking for new ways to reach out and connect with the young musicians of the state. My choir is so excited about singing in the historic Scottish Rite Masonic Temple in Guthrie and we know that the Guthrie choir will love the acoustics in Te Ata Memorial Auditorium as much as we do,” Hanson said.

Rhenada Finch, adjunct music instructor at USAO will accompany both choirs on piano.

USAO student Jessica Moore, a senior elementary education major from Oklahoma City will be featured during the concerts on French horn. Emily Tomberlin, a freshman speech language and pathology major from Oklahoma City, will provide accompaniment on the fiddle and USAO alumna Annica Canady will add an additional timbre for one piece on the oboe.

Interested parties are invited to call 574-1297 for more information.