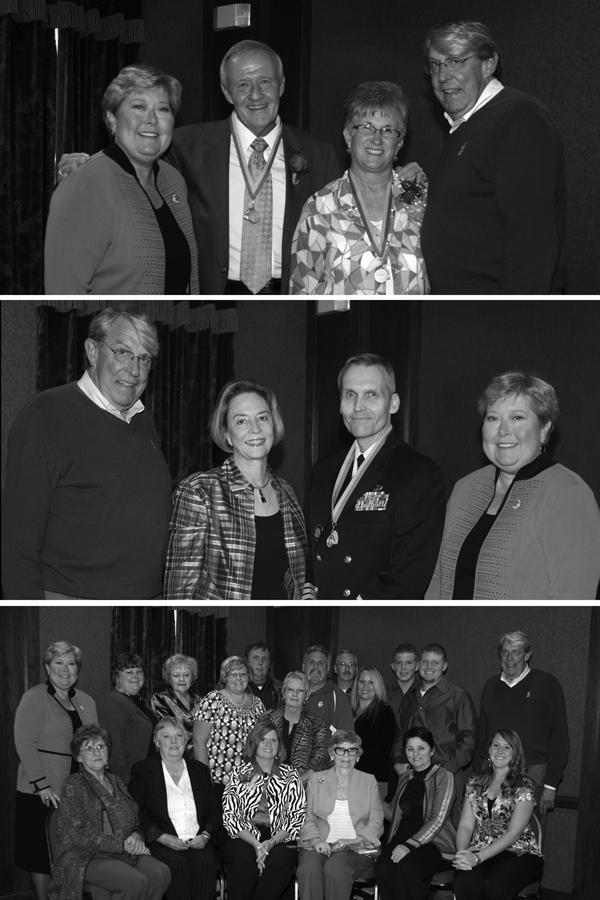 Oklahoma Lieutenant Governor Jari Askins (left) inducted nationally recognized children’s authors Bill and Carol Wallace (center) into the USAO Alumni Hall of Fame Nov. 8. Longtime residents of the Chickasha area, the Wallaces were educators in the Chickasha Public School system for many years. With the Wallaces is Dr. John Feaver, president of USAO.

Although the ceremony at the University of Science and Arts was to honor this year’s inductees into the Alumni Hall of Fame, the inductees honored the university with their praise. The Hall of Fame Ceremony was held Nov. 8 during the annual Alumni Homecoming on the USAO campus. More than 150 alumni from coast to coast attended the reunion.

“Although it wasn’t by design, the honorees this year really come from all periods of this campus – OCW, OCLA and USAO,” said Oklahoma Lt. Gov. Jari Askins, who emceed the Hall of Fame inductions. “As I was thinking about this, I thought how wonderful that this happened during the centenial celebration for this school because it speaks to me, not just to the 100 year history that you have, but it speaks to what the future has in store. It’s clear to me that it doesn’t really matter what you call this school, that the impact of the people who receive their education here reaches far beyond the historic district that includes this campus.

“Today you honored a pioneer in computer technology – a mathetician and a woman at a time when there were not a lot of women in mathematics, but who’s skills and talents clearly have had an impact on all of us today.

“You honored educators and authors. We know that anyone who is involved in education sends out ripples through their students that go on and on far beyond our vision.

“You honored a military chaplain whose efforts, not only to help the individuals that he comes in contact with through the military, but also his efforts with other religious leaders around the world give us great hope for what peace we have in our future. All of it started right here,” Askins said.

Inductees into the Hall of Fame this year included U.S. Navy Chaplain Bradford E. Ableson, computer pioneer Nan Nabors Reynolds and nationally recognized children’s authors Bill and Carol Wallace. Although Reynolds could not attend the ceremony, many of her family members attended and expressed appreciation for the honor.

“She (Reynolds) has always said that Chickasha is her favorite town and the best college she attended was the Oklahoma College for Women,” said Jacque Rollyson, Reynolds’ niece and guardian. “Our whole family has always been proud of Nan, but for her, none of this is a big deal. She doesn’t feel like she has accomplished anything extraordinary. But she did do something extraordinary. She was a pioneer in mathematics. She understands things I couldn’t even begin to understand.”

Reynolds was one of 10 siblings, nine of which attended OCW. She graduated from OCW in 1938, majoring in mathematics. She received her master’s degree from Oklahoma State University in 1940. During the 1950s, her reputation as one of the world’s elite mathematicians impressed the faculty at UCLA. The university invited her to work on one of the nation’s first computers. While the computer isn’t considered the first, she was among a handful of intellectuals across the nation commissioned to experiment with early computer technology.

Chickasha residents and nationally known children’s authors Bill and Carol Wallace recalled their days at USAO – then known as the Oklahoma College of Liberal Arts.

“The campus of the Oklahoma College for Women was a wonderful landmark for me as I was growing up. My dad’s sisters went to school here. Two of them became long-time teachers. My cousin graduated from OCW. My brother David graduated for OCLA and currently our granddaughter Bethany is a senior at Chickasha High School and is taking classes concurrently at USAO,” Carol Wallace said.

“Our college and our town are a tradition for us. My education at USAO gave me the training I needed to teach school. I taught second grade for 26 years. I’m honored to tell people that I graduated from this college.”

“I’m very proud the be a part of the campus, this town and this state. My sister graduated from OCW and spent 33 years teaching second grade. My mother graduated from OCW and retired from the Chickasha Public Schools math department when she was 74 years old,” Bill Wallace said. “This college has made a positive impact on many people in my family and many people I know.”

Bill and Carol Wallace both graduated from the Oklahoma College of Liberal Arts in the early 1970s. Carol Priddle Wallace graduated in 1970 and Bill Wallace in 1971 – both with Elementary Education degrees. They received their master’s degrees from Southwestern Oklahoma State University in 1974. Carol received her master’s degree in Elementary Education while Bill’s degree is in Elementary Administration. Bill also studied professional writing with William Foster-Harris and Dwight V. Swain at the University of Oklahoma.

“The school lured me. The people kept me. And the mission of USAO transformed my life in ways that allowed me to exceed virtually every dream I have,” said U.S. Navy Chaplain Bradford Ableson, a 1980 graduate of USAO.

“As a young Oklahoman, I was given the keys to the vault by admission to USAO. Faculty members were quick to say that the problems of this world are interdisciplinary. I will attest that their words are true -- for in a life spent on working on complex problems from landmine reform, to global religious reconciliation initiatives, I have yet to find the first truly simple issue,” Ableson said.

“The words I leave here today are those I articulated while serving as a student here at USAO and I believe ultimately brought me back to this Hall of Fame. I leave them for the unbroken line of Drovers who will enrich our world -- some of whom have not been born yet and many of whom who have not seen this place yet.

“The words I leave you with are -- those who, with the highest capacity for achievement, must learn how to disagree without being disagreeable. No man or woman need leave her or his faith at the door in order to change the world -- so long as that faith is not used as a tool of contentiousness. And anyone who seeks to act only after aligning herself or himself with the majority opinion will rarely accomplish a courageous thing in this life.”

Ableson is a visionary in religious reconciliation, an architect of the modern model for military chaplains and was a chaplain to President Bill Clinton. He served in U.S. Marine Corps units, surface ships, in the Navy’s largest submarine squadron and as command chaplain of the aircraft carrier USS George Washington. He has qualified for the Veterans of Foreign Wars five times with service in Operation Ernest Will, Operation Desert Storm, Operation Southwest Watch, Operation Enduring Freedom and Operation Iraqi Freedom.

Additionally, ashore, Ableson served as an executive assistant to the Navy Chief of Chaplains and as a global directorate of the U.S. Strategic Command. In the Strategic Command, Ableson pioneered global religious reconciliation initiatives that continue to sow seeds of peace in war-torn areas.

Also in the Strategic Command, Ableson was one of only four U.S. multi-service military commands with global responsibilities. Prior to his arrival, the role of command chaplain had been exclusively local with focus on ministry to headquarter personnel.