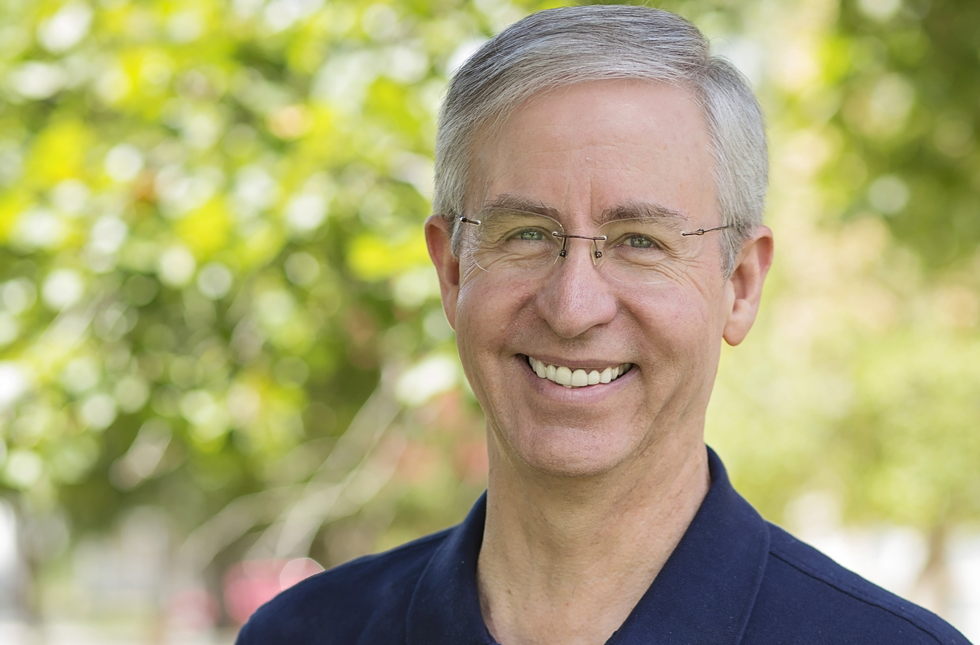 Dr. Dan Hanson, professor of music, retired at the end of the spring trimester from the University of Science and Arts of Oklahoma after 28 years of service.

The occasion is Commencement of Spring 2015.

The eight o’ clock ceremony is winding down as the students have already made their fateful dash across the stage and President Feaver has conferred their degrees with the authority vested in him by the Oklahoma State Regents for Higher Education.

As the audience rises to join in singing the College Hymn, a familiar slender figure takes his place at a keyboard situated at the foot of the stage. Dr. Dan Hanson’s somber black robes can’t hide his irrepressible smile as the group song ends and he makes a quick adjustment to the keyboard. The familiar strains of Chad and Jeremy’s 1964 hit, “A Summer Song”, accompany the students on their long, slow walk out of the auditorium.

He holds the song’s final chord a moment longer than expected, signaling not only the end of the night’s festivities, but also the end of an era.

After 28 years of service to the university, Hanson has officially retired.

Hanson was born in Lamesa, Texas, the son of a cotton farmer in a community rich with music and music lovers. He was encouraged to play the piano by his mother and became known around town as “that little boy who plays piano” after defeating kids twice his age in the town talent show at the age of 8.

It wasn’t until the fifth grade that Hanson’s future as a musician was forever sealed.

“It was the first Sunday night in February of 1964,” Hanson said. “I was a second-semester fifth grader and I saw the Beatles on the Ed Sullivan Show.”

“To me, they looked like brothers. They sang together in harmony, which I didn’t know anything about yet. They were all smiling and enjoying the situation without looking egotistical. Their music was so clean and clear-cut. It was effervescent and you could hear every word.

“It seemed to me like it was a step-up from anything I’d ever heard before. It was transformative and I knew right then that I was a drummer, not a piano player. I loved Ringo and I loved this Beatle thing. I could already play so, at school, everybody took to me like I was one of the Beatles.”

Driven by this newly found enthusiasm, Hanson split his time during junior high and high school between the rigors of school-sponsored musical activities and performing in popular music combos.

Hanson earned a spot with the Texas All-State Band beginning in his junior year of high school and, during his senior year, he was the first chair percussionist with the prestigious organization. This led to his receiving scholarship opportunities from nearly every school in the state – except for the one he wanted to attend, the University of North Texas in Denton.

“That was the serious music school in Texas and I just couldn’t see myself going anywhere else,” Hanson said. “So I went there, but it wasn’t what I thought it would be. It was really overwhelming and every class I had was taught by a graduate assistant. So I only stayed a year before transferring to Texas Tech in Lubbock.”

The change was everything he’d hoped and Hanson immediately assumed lead roles in the music program there. His high-visibility position as the pianist for the Texas Tech Stage Band led to regular requests from popular combos in the area for his services including a stint with rockabilly legend Eddie Fontaine.

Hanson graduated from Texas Tech with a degree in music theory in 1975. He toured professionally for two years, while maintaining an apartment in Austin before the rigors of the road and a friend’s recommendation encouraged him to take a job at South Plains College in Levelland, Texas.

While teaching as an assistant professor, Hanson completed his master’s degree at Texas Tech in music theory and composition in 1981.

Hanson enrolled in the doctoral program at North Texas State in 1984 and paid for his studies by playing solo piano at restaurants and country clubs all over Denton.

He earned his doctorate of musical arts in composition in 1987.

Hanson was hired as an adjunct instructor at USAO in the fall of 1987 and joined the faculty as an assistant professor of music the following year.

Hanson takes particular pride in having completely revitalized the Concert Band at the university.

“When I first came to USAO, we had two students enrolled in the band,” Hanson said. “Over time, I was able to build that up to be an important part of the overall student experience. About a third of my bands were made up of students taking the course for artistic expression credit. Another third were instrumental music majors and the last portion were just students who had enjoyed taking band in high school.

“It was always a challenge to bring those students up to a common level where we could perform as an ensemble and it was my goal that, by the day of the concert, that those seams were no longer visible to the audience.”

In addition to his teaching duties, Hanson served as the music department coordinator from 1990 through 2002. He was elected as president of the USAO Faculty Association three times in 1995, 2004 and 2013.

His composition, A Triumphal Procession, was published by RBC Publications in 1991.

Hanson was awarded the Regents’ Superior Teaching Award in 2005 and 2007 and was named “Best University Educator” by the Chickasha Express-Star’s readers in 2004 and 2012.

Hanson looks forward to spending more time with his wife, Judy, as well as reconnecting with his friends and family in West Texas.