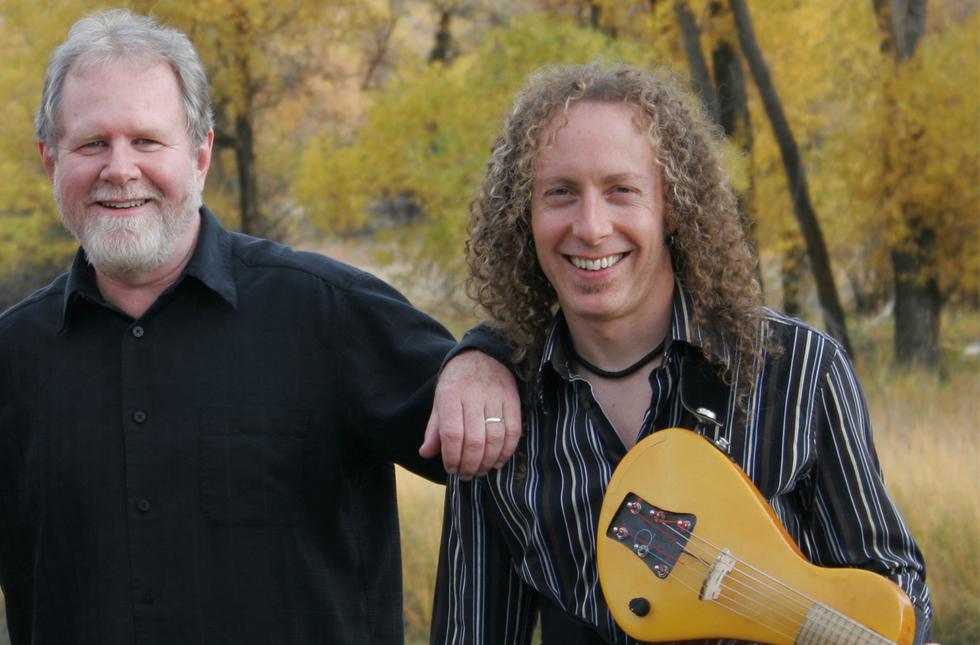 Pianist Phil Aaberg (left) and violinist Tracy Silverman pool their talents and skill to perform as Two-Part Invention. The duo will kick off the 13th season of the Davis-Waldorf Performing Arts Series with a performance beginning at 7:30 p.m. on Oct. 11 in Te Ata Memorial Auditorium at the University of Science and Arts of Oklahoma. Tickets are $12 for the general public with discounts available for students and seniors and can be purchased online at usao.edu/dwpas.

What happens when a Juilliard trained violinist and a pianist best known for his performance on a 70s AOR classic sit down to play Bach?

When that violinist is Tracy Silverman and that pianist is Phil Aaberg, music that once seemed familiar and, to some, inaccessible, becomes transformed into something living, rhythmic and unpredictable.

The duo, billed as Two-Part Invention, will kick off the 13th season of the Davis-Waldorf Performing Arts Series (DWPAS) with a lively performance scheduled to begin at 7:30 p.m. on Oct. 11 in Te Ata Memorial Auditorium at the University of Science and Arts of Oklahoma.

Silverman promises that everyone who attends will find something they can relate to and enjoy.

“We’re going to do some of the pieces that we’ve recorded together, reinterpretations of classic pieces as well as some solo pieces from each of us,” Silverman said. “We’re going to cross a lot of musical and stylistic boundaries so expect to be surprised.”

“This is not going to be your typical piano and violin recital.”

Dr. Ken Bohannon, coordinator of the DWPAS and associate professor of music at the university, saw Silverman perform a few years ago and has worked ever since to bring him in for the series.

“I knew after seeing Tracy perform that we had to have him on campus so it’s just been a matter of working out the timing since,” Bohannon said. “Now that I’ve had the opportunity to hear his collaborations with Phil Aaberg, I realize that we’re getting an even more amazing show.”

“I’m so excited we have this opportunity to share such an amazing experience with our campus and community audiences.”

Critics have described Silverman as “the greatest living exponent of the electric violin,” an instrument he built for himself and began to play in the early 1980s.

While most violins have four strings, Silverman’s electric violin has six, giving him a greater range and allowing for techniques unplayable on the traditional form of the instrument.

Similarly, Aaberg graduated from Harvard University with a bachelor’s degree in music in the 1960s and immediately moved out to California to play blues and rock and roll.

By the 1970s, he was recording and touring with Oklahoman Elvin Bishop and performed on his best-known hit, “Fooled Around and Fell in Love”.

Since Aaberg has performed with the Boston Pops orchestra, performed as a guest artist on over 200 albums and earned an Emmy Award nomination for his work with the PBS show All-American Jazz.

The duo is scheduled to perform for students at Chickasha Middle School at 10 a.m. on the day of the performance.

The DWPAS will continue on Nov. 12 as the Golden Dragon Acrobats return to USAO for an encore performance. The acrobats thrilled a capacity audience upon their first visit to campus in 2006 with death-defying stunts that have lingered long in the memory of those who attended the show.

DWPAS is produced by USAO in conjunction with the Chickasha Public School Foundation and is supported in part by an award from the Oklahoma Arts Council, and foundations, corporations and individuals throughout Arkansas, Kansas, Missouri, Nebraska, Oklahoma and Texas.

Season tickets for the DWPAS are available at $40 for the general public, $35 for seniors and USAO Alumni Association members, $20 for USAO staff and faculty, $12 for students and children under 18 and only $8 for USAO students.

Both season and individual performance tickets can be purchased at the USAO Business Office or by calling 574-1213.