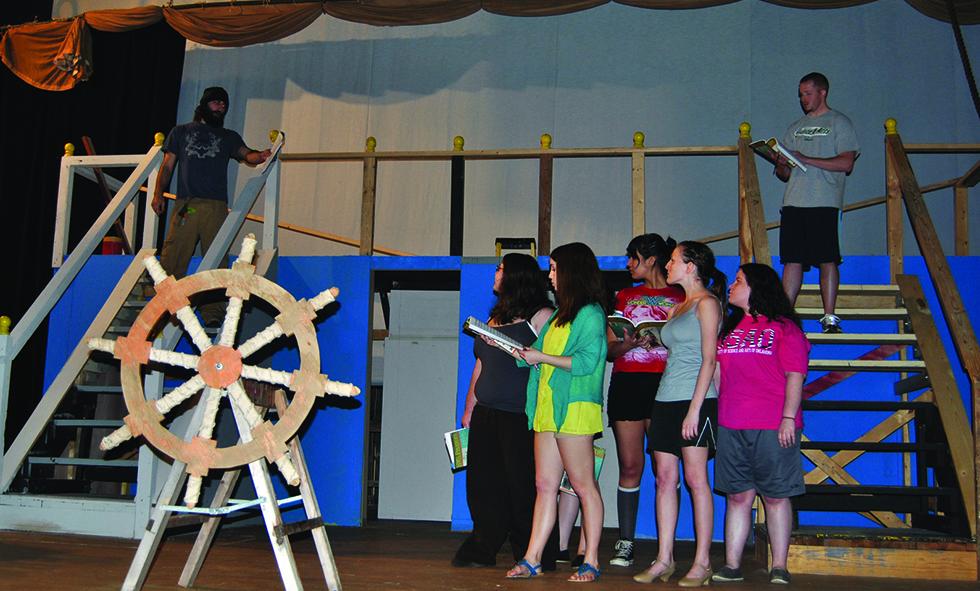 Cast members of H.M.S. Pinafore put the final touches on their lines and characters in anticipation of the April 1 opening of the show. Gilbert and Sullivan’s comic masterpiece will be performed at the University of Science and Arts in the Davis Hall Theatre on April 1 and 2 at 7:30 p.m. and on April 3 at 2:00 p.m.

Her Majesty’s Ship, The Pinafore has docked! The weather is beautiful, the location exotic and everyone is falling in love.  Hey…that sounds like a song…

Gilbert and Sullivan’s comic masterpiece, H.M.S. Pinafore, will be performed at the University of Science and Arts in the Davis Hall Theatre on April 1 and 2 at 7:30 p.m. and on April 3 at 2:00 p.m.

This operetta took America by storm in 1878, when it first opened in New York, and has delighted audiences of all ages with its beautiful music, clever lyrics, and simple story of love that conquers all.

Tickets are free to USAO students, faculty, alumni, and staff, and tickets ($10 adults/ $5 students) will be available at the door each night for all members of the community.

"I am excited to work on this joint project with the drama department.  The students are working hard and have learned a lot; it's a blessing to be a part of their musical and dramatic growth,” noted Bohannon, associate professor of music.

"I have been wanting to be involved with a Gilbert and Sullivan production for many years now. It’s a fun and bubbly show with all the usual twists and turns in the plot.”

The production also involves dozens of other students working backstage. Technical director Martin Reding has worked with students to transform the stage of the Davis Theatre into the deck of a British “Man O’ War” sailing vessel. USAO students along with Rhonda Taylor, Chickasha resident and USAO alumna, have created costumes.

The Chickasha Community Theatre has provided technical support, and Emily Hector, Chickasha resident and owner of ‘Love To Dance Studio,’ has created original choreography for the production. Additional support has come from the USAO Culture and Recreation committee.

Carrie Chavers, Chickasha resident and teacher at Chickasha High School, designed the original scenery, and has been involved in set painting and making her design a reality.

“I want the curtain to open,” Chavers offered, “and for the audience to say ‘Wow! This is going to be something.”

This spring production also supports the interdisciplinary, academic mission of USAO. Students had the option this trimester of taking a course about the history of the American musical theatre, a technical theatre class, or even getting credit for their work on the operetta.

“Nothing is more exciting than mentoring our students as they make connections between what they are learning in the classroom and what they create on stage,” said Katie Davis, assistant professor of drama.

“I have thoroughly enjoyed the opportunity to collaborate with Ken and Rhenada and think it is marvelous for the students to have the chance to learn about this unique style of performance. This production has a diverse cast with great comic timing and beautiful voices. They will delight the audience.”

On April 2, campus and community members are encouraged to arrive by 7 p.m. to enjoy the opening reception of “Seven” in the Davis Hall Gallery before attending HMS Pinafore.  The reception will continue until 9 p.m., allowing audience members to view the works of seven USAO BFA art candidates during the intermission of the show as well.