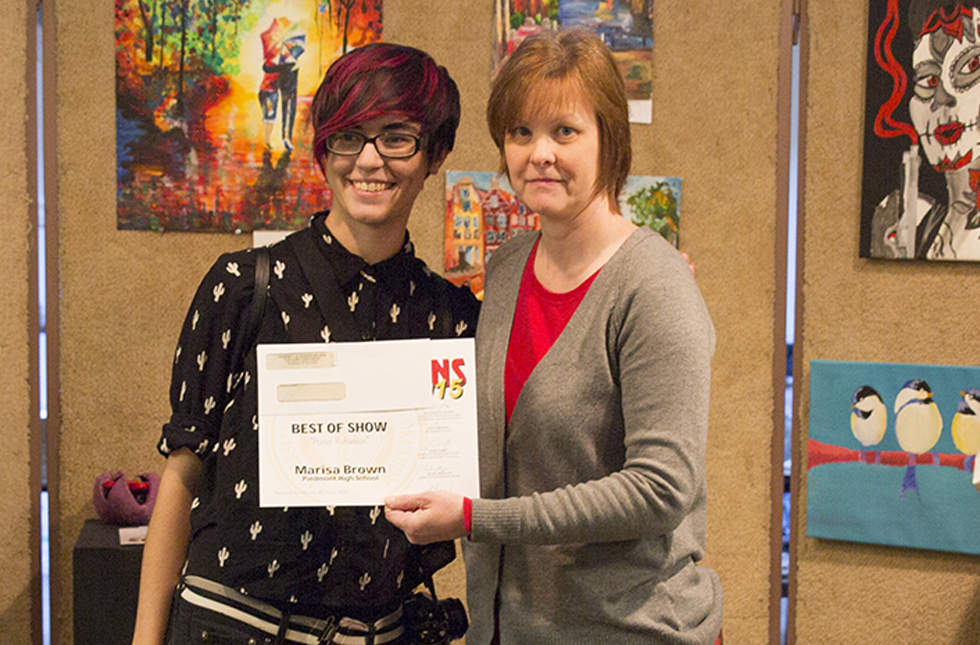 Marisa Brown of Piedmont (second from left) won the Best in Show award for her piece “Porter Robinson” in the Innovations 2015 art competition. Jackie Knapp (third from left) presents Brown with the award. Layne Thrift (left), assistant professor of art, and Steve Brown, professor of art, were two of five judges in the competition. The awards, which were given out March 6, featured work submitted from 15 different schools.

USAO’s art faculty assessed 259 entries in order to assign 27 awards of merit, 10 judges’ choice awards and one award for best in show.

This year’s Best in Show prize was awarded to Marisa Brown of Piedmont for her marker drawing titled, “Porter Robinson.”

Jackie Knapp, associate professor of art and department coordinator, said the piece stood out as a winner because, “although small in dimension, it contained a magnetism and strength that grabbed our attention easily. It was well constructed, well designed and made from a creative approach to liquefied marker.”

The awards, which were given out March 6 in a ceremony held in the Third Floor Gallery at USAO, featured work submitted from 15 different schools. Judges’ choice winners were awarded $40. The Best in Show award is $100.

“Art entered into Innovations 2015 displays a great deal of talent by high school students across the state,” Knapp observed.

The winners for Innovations 2015 were as follows: