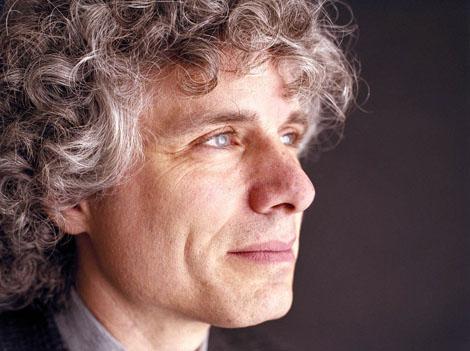 Steven Pinker asks audacious questions about the human mind -- then boldly sets out to answer them. Recently named one of TIME magazine's 100 Most Influential People in The World, he is enormously popular in the media and highly respected in scientific circles. On April 8, he takes center stage in Chickasha as the keynote speaker for the fourth annual Emerson-Wier Liberal Arts Symposium. The evening presentation is scheduled at 7:30 p.m. in Te Ata Memorial Auditorium on the campus of the University of Science and Arts of Oklahoma.

Pinker will speak on The Stuff of Thought: Language as a Window Into Human Nature. Prior to the lecture, he will participate in a panel discussion of respected researchers and authors who will introduce various perspectives on the nature and functions of the mind.

The panel discussion is scheduled from 2-4 p.m. in the Davis Hall Amphitheater on the USAO campus. The panel includes Dr. Justin Fisher, an assistant professor of philosophy at Southern Methodist University in Dallas; Dr. Shelia Kennison, a member of the Department of Psychology at Oklahoma State University; Dr. Amy McGovern, an assistant professor in the School of Computer Science at the University of Oklahoma, and Dr. Haj Ross, a professor in the Linguistics Section of the Department of Linguistics and Technical Communication at the University of North Texas.

Pinker is an experimental psychologist interested in all aspects of language and mind. Much of his initial research was in visual cognition -- the ability to imagine shapes, recognize faces and objects, and direct attention within the visual field. But beginning in graduate school he cultivated an interest in language, particularly language development in children, and this topic eventually took over his research activities.

Known for his wit and profound ideas, many of them explained by referencing pop culture, Pinker is recognized as an accessible academic, helping non-specialists understand the science behind human thought and action.

A native of Montreal, Pinker is Johnstone Professor of Psychology at Harvard and has also taught at Stanford and, for 21 years, at MIT. He is a fellow of the American Academy of Arts and Sciences and the American Association for the Advancement of Science, has won a number of teaching prizes, and was named among Newsweek’s “100 Americans for the Next Century.” His research on visual cognition and the psychology of language has received numerous awards, including the Troland Award from the National Academy of Sciences.

Pinker earns praise for bridging science and culture. “Pinker is a unifier, someone who ties a lot of big ideas together. He has studied visual cognition and language acquisition in the laboratory, and was one of the first to develop computational models of how children learn the words and grammar of their first language,” said John Brockman, a literary agent and author specializing in scientific literature.

For two decades his research focused on the distinction between irregular verbs like bring-brought and regular verbs like walk-walked. The reason is that the two kinds of verbs neatly embody the two processes that make language possible -- looking up words in memory, and combining words (or parts of words) according to rules.

Pinker is the chair of the Usage Panel of The American Heritage Dictionary and has served as editor or advisor for numerous scientific, scholarly, media and humanist organizations including the National Science Foundation, the American Psychological Association, and the Linguistics Society of America.

In 1994 he published the first of five books written for a general audience. The Language Instinct was an introduction to all aspects of language, held together by the idea that language is a biological adaptation. This was followed in 1997 by How the Mind Works, which offered a similar synthesis of the rest of the mind, from vision and reasoning to the emotions, humor, and art.

In 1999, he published Words and Rules: The Ingredients of Language, which presented his research on regular and irregular verbs as a way of explaining how language works in general. And in 2002 he published The Blank Slate: The Modern Denial of Human Nature, which explored the political, moral, and emotional colorings of the concept of human nature.

His latest book The Stuff of Thought: Language as a Window into Human Nature was published in 2007. Pinker frequently writes for The New York Times, Time Magazine, The New Republic, and other magazines on subjects such as language and politics, the neural basis of consciousness, and the genetic enhancement of human beings.

Both the panel discussion and the evening lecture are free and open to the public. USAO’s Emerson-Wier Liberal Arts Symposium series is sponsored annually by the USAO Foundation and was inspired by endowment funds created by Oklahoma College for Women alumni Gladys Anderson Emerson and Nance Foules Wier.