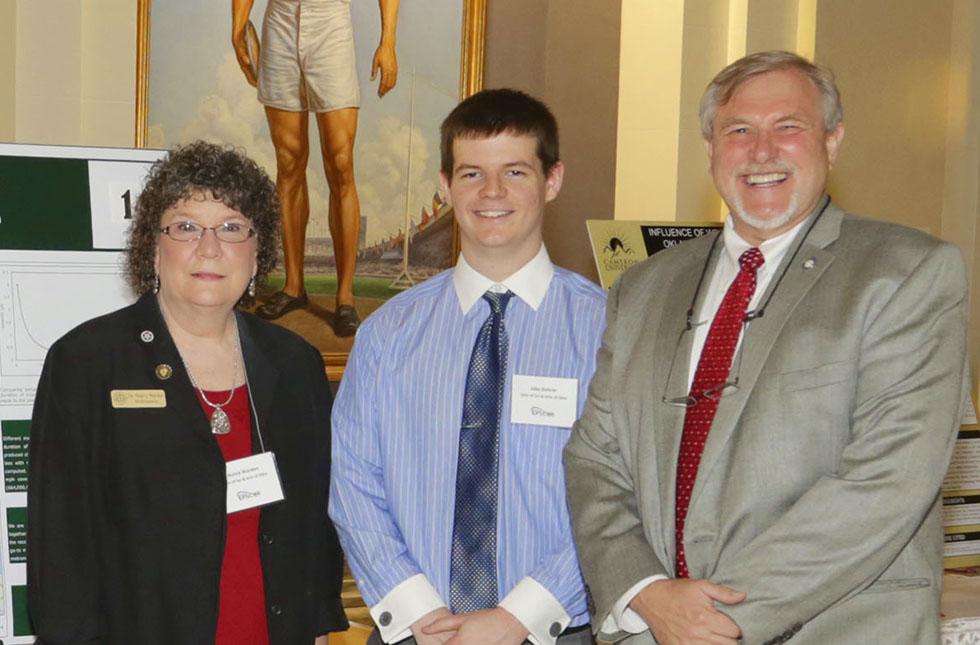 State representative David Perryman (right) joins Jake Rohrer (center) and Dr. Nancy Warden at the state capitol as Rohrer presents his research on the intersection between math and music. Rohrer was one of 26 students statewide to participate in the Oklahoma Experimental Program to Stimulate Competitive Research day at the capitol.

Two students’ research that began as an independent study project at the University of Science and Arts of Oklahoma joined peers statewide at the capitol for a highlight of Oklahoma undergraduate research earlier this month.

The research, underscoring the relationship between mathematics and music, was completed in cooperation with Aaron Manuel, a Sapulpa native who graduated last fall with a bachelor of science degree in mathematics.

Rohrer was one of only 25 students statewide chosen to present.

The research project, titled “How Long is a Beat,” used digital metronomes to study not only how long the sound signifying a beat was but how the silence between beats changed based on tempo.

“What we found was that the length of the sound that represented the beat didn’t change but that the silence between beats could be plotted along a predictable curve,” Rohrer said. “The results also showed that no matter how fast the tempo was, the silence never completely disappeared.”

Warden said that the independent study course invited participants to consider how mathematics intersected with a number of disciplines, including art, sports and music.

“I believe that we use math everyday and in everything, so I designed an independent study course where the students could explore those mathematics connections,” Warden said.

Several months after the students had completed their projects and delivered their final presentations, Dr. Dex Marble, vice president for academic affairs, approached the university’s faculty about possible student research at USAO to highlight at the upcoming EPSCoR event.

“When I thought back to the class, I felt like Jake and Aaron presented work that would represent the school’s unique mission as well as compare favorably to work done statewide,” Warden said.

Rohrer said that he felt uncomfortable at first presenting the research without Manuel, who was no longer eligible to participate due to graduating, but Manuel convinced him that sharing their discoveries with a statewide audience took precedence.

“It was a really enriching experience because it gave me an opportunity to present my ideas to a general audience without any specialized knowledge of my field,” he said. “I noticed some people skipping over some of the research-intensive projects to come look at mine because music was something to which they could relate.”

Warden felt that Rohrer’s presence was invaluable to both the university and to the event as a whole.

“When there is a statewide research event like this, it’s so important that USAO be represented so that people know not only that our students are top-notch but the education they are receiving is among the best in the state,” Warden said.

“Jake’s research and presentation was the perfect example of that.”