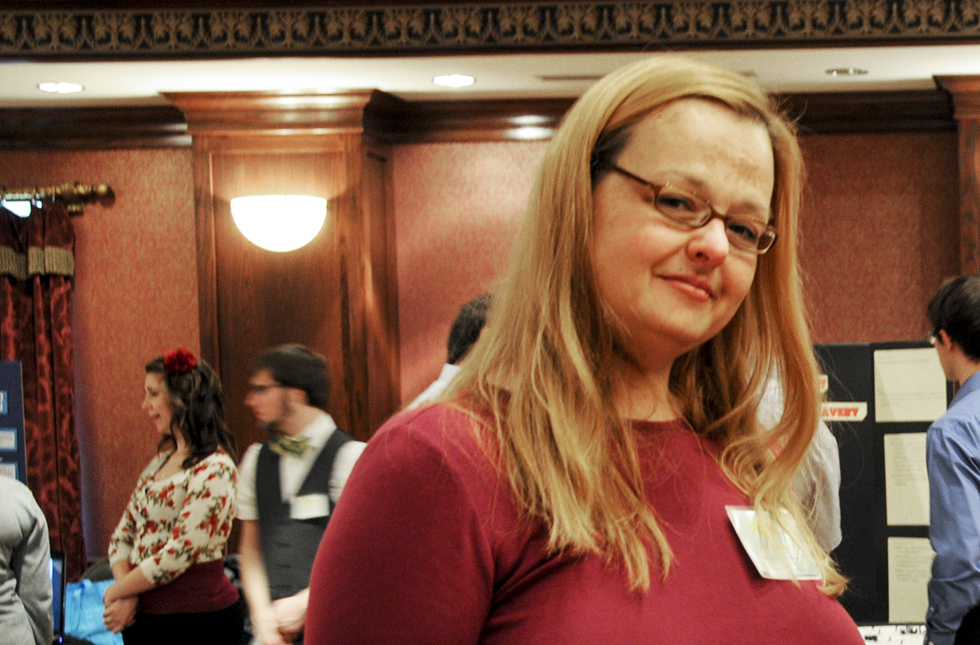 Dr. Aleisha Karjala oversees students from the Political and Economic Systems and Theories course as they present solutions to local challenges at a fair open to the public. Karjala has been named a 2014 DaVinci Fellow for her creativity in instruction by the DaVinci Institute of Oklahoma.

Dr. Aleisha Karjala, associate professor of political science at the University of Science and Arts of Oklahoma, has been named a 2014 DaVinci Fellow by the DaVinci Institute of Oklahoma.

The award recognizes creativity and innovation among members of Oklahoma’s higher education faculty, according to the organization’s website.

Dr. Dex Marble, vice president for academic affairs, said he believes that the award is a well-deserved recognition of Karjala’s outstanding instruction.

“Dr. Karjala’s record of innovative approaches to teaching political science goes well beyond her excellence in the classroom and her regular participation in professional conferences and publications,” Marble said. “Her leadership in involving well-prepared students in both the community and the state on issues of public concern has raised the standard among her peers statewide.”

She said she is impressed with how Karjala has transformed a discipline often thought of as theoretical into a practical one for her.

“For our upper-division courses, Dr. Karjala has focused a lot of our attention on making the concepts we study actionable rather than just conceptual,” Robinson said. “In our Campaigns and Elections course, we fact-checked statements made by the presidential candidates in the 2012 election and then hosted a public forum where we could discuss our findings with the student body and community.”

“That kind of instruction is invaluable for getting the issues out of the classroom and into the electorate.”

Karjala, a resident of Norman, earned her doctorate in political science from University of Oklahoma in 2007.

In addition to teaching Political and Economic Systems and Theories (PEST) and American Civilization I and II as part of USAO’s innovative interdisciplinary studies program, Karjala teaches all the courses in the university’s political science department.

Karjala, along with four other Oklahoma faculty, will receive her honors at a banquet on March 28 at the Oklahoma History Center in Oklahoma City.