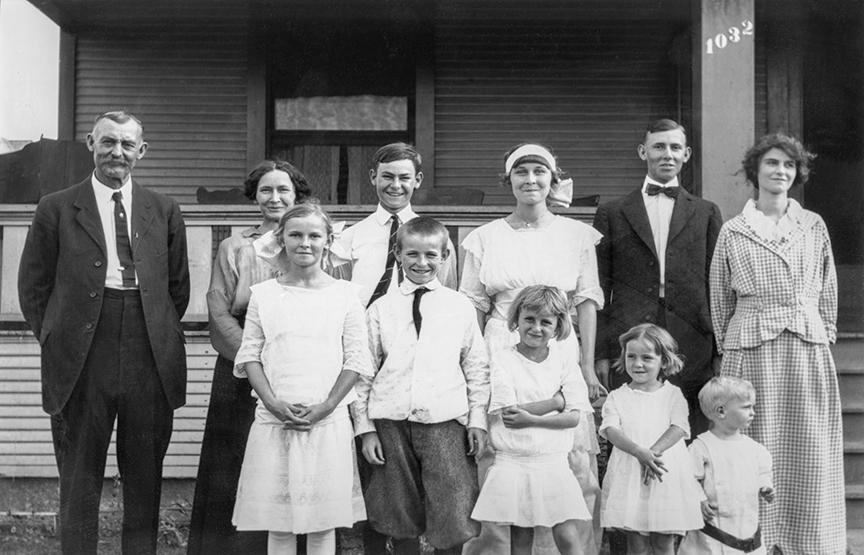 Family has roots reaching back to university’s beginnings

One of the many scholarships available through the University of Science and Arts of Oklahoma Foundation, the Mildred Johnson Kyle Scholarship is available to students who demonstrate a financial need and maintain at least a 3.0 grade-point average, with preference given to math majors.

A 1930 graduate of the Oklahoma College for Women (now USAO), Mildred Kyle, nee Johnson, wanted to establish a scholarship in honor of the Johnson women, alumni of the college who include herself, her sisters Thelma and Dorothy, as well as her sister-in-law Mary Beth. A recent addition from the estate of Mildred’s son, James T. Kyle, has nearly doubled the scholarship’s funds, providing even greater support for hardworking USAO students.

Born in Cincinnati in 1937, James Kyle graduated from Kenyon College in 1959 with a degree in economics and earned an MBA from Indiana University two years later. In 1963, he took a job teaching economics at Indiana State University in Terre Haute, eventually becoming an associate professor and serving as department chair for many years. He retired in 2000 and moved to Palm Springs with his husband Mark Leggett in 2009. He passed away in August 2019.

“We miss Jim,” said Dr. Joseph Kyle, Mildred’s eldest son. “My brother lived a rich life and always contributed to his community. This generosity to USAO in honor of our mother and our aunts is just like him.”

The Johnson family came to Oklahoma in 1915 as the expansion and consolidation of major railroad companies changed employment opportunities in the area. Mildred’s father, Jefferson Davis Johnson, worked as a boilermaker and had served in various locations around Texas throughout the 1890s and early 1900s. He spent over a year in Panama as part of a major earth-moving project at the Panama Canal, returning stateside in December 1914 and finding work with the Rock Island Railroad in Chickasha, where the newly-opened Oklahoma College for Women would provide good educational opportunities for his children.

One of the only four-year institutions for women west of the Mississippi River, OCW allowed the Johnson girls to live at home, walk to class, and receive an excellent education at a manageable cost. First to graduate was Thelma, who received a bachelor’s degree in English literature in 1927. Mildred followed in 1930, earning a degree in mathematics, while Dorothy Johnson graduated with a degree in commerce in 1935. The girls’ younger brother Joe also married an OCW alumna, Mary Elizabeth Hayes, who graduated in 1934 and whose family operated a local dairy.

Since only about fifteen percent of young people in the 1920s even finished high school, it was quite rare for anyone to earn a bachelor’s degree but exceedingly so for women. But Jeff Johnson could proudly say that six of his nine children—three boys and three girls—had achieved this honor.

While Mildred tried her hand as a teacher for a short time, she did not feel like it was a good fit. When her older brother Harold urged her to see more of the world—something OCW’s liberal arts environment also encouraged—she decided to travel with him back to Cincinnati, where he directed a laboratory for the Gulf Refining Company. There she met John K. Kyle, Harold’s lab assistant, whom she would marry in 1933. Jeff Johnson retired in the late 1920s and died in 1939. During that time, and for years afterwards, the many branches of his family continued to visit Oregon Avenue frequently.

The children from these four OCW alumni were encouraged to value higher education just as their parents had been, back when it was still an unusual endeavor. They have continued to pass this love of learning to their own children and grandchildren and letting them know what good liberal arts colleges do: opening doors within the mind and encouraging curiosity about the world outside.