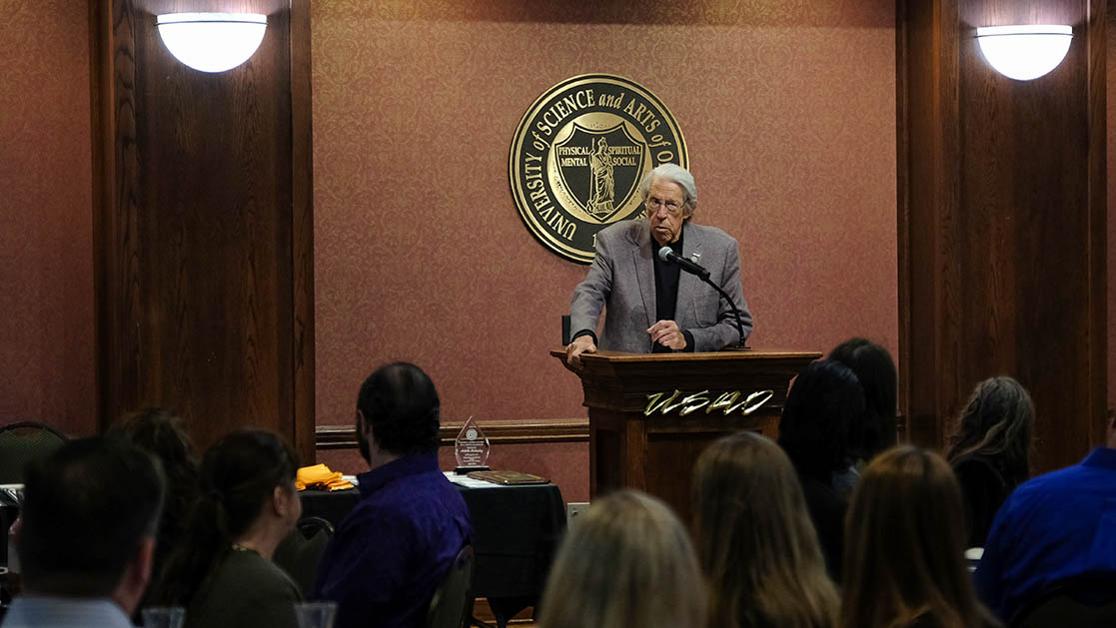 The University of Science & Arts of Oklahoma recently honored students for their achievements and service during the Minerva Awards ceremony.

“These students show their exceptional dedication to the Science & Arts mission both inside and outside of the classroom and that deserves the highest praise,” said Nancy Hughes, associate vice president for student success and human resources. “Named after Minerva, the ancient Roman goddess of wisdom and science and a symbol of this university, these awards recognize those students who are most steadfast in their commitment not only to their academic achievements, but also in their service as leaders within our campus community."

The Minerva Awards publicly recognize outstanding students at Science & Arts. Students are honored for excellence in academics, leadership, community service, campus involvement, diversity and many other areas. In addition to individual awards, the ceremony recognizes honor society members and seniors graduating with honors.

The Science & Arts Leadership Academy is a three-tiered program that enhances students’ leadership skills with various workshops, projects and networking opportunities. In addition to being a great resume builder, graduates from the program will have a plethora of leadership experiences that will help them excel through life after college.

Leadership Awards honor outstanding students who have shown leadership qualities during their time at Science & Arts. A Leadership Award recipient has demonstrated the willingness and ability to involve others and hold leadership roles on campus.

Commitment to Diversity Award honors a Science & Arts student who has exhibited awareness and appreciation for diversity and inclusion in their activities and performance in and outside the classroom setting.

Drover Pride Award recognizes individuals who have demonstrated extraordinary support for the campus community, embodying the Drover spirit through participation and achievement.

George Austin Award for Campus Leadership is given to a Junior or Senior who has been on the forefront of campus life, including taking leadership roles in activities such as serving as an officer in student groups, organizing service projects, leading programs, and helping build the leadership skills of other students at Science & Arts.

The Gladys Anderson Emerson Award for Undergraduate Research is named for an OCW graduate who established herself as one of this country’s leading nutrition authorities.  While her most notable achievement in science may have been to isolate Vitamin E, she is better known at her alma mater as a global ambassador for the liberal arts. The Gladys Anderson Emerson Award honors a student who has best distinguished him/herself in the field of academic research as an undergraduate.

Few Oklahomans have garnered as much attention around the world as Native American storyteller Te Ata, recognized for a lifetime of achievement in the Arts by governors, presidents, kings and her alma mater, the Oklahoma College for Women. The Te Ata Creative Expression award honors a Science & Arts student who has best distinguished him/herself in the arts. This student must have produced substantial creative work in the area of music, art, drama, or creative writing. Preference is given to students who have publicly performed, exhibited, or published their work.

This award, funded by the Swineford family, is named for Derald Swineford, who was an integral part of the university’s art department across four decades and two name-changes.  The Swineford Art Award is the highest award bestowed on a junior or senior art major.