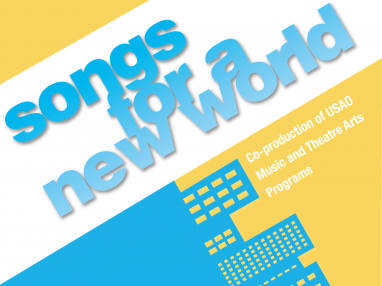 The music and theatre arts programs at the University of Science and Arts of Oklahoma will join forces to present Jason Robert Brown’s concept musical “Songs for a New World” on April 12-13 at 7:30 p.m. in the Davis Hall Little Theatre.

General admission tickets are $10 and can be purchased at the door on the night of each performance.

Premiering in 1995, “Songs for a New World” was Brown’s first produced show and straddles the line between musical theatre and revue. The music combines elements from pop, gospel, funk and jazz, all connected by the idea of “the moment before it all becomes clear.” Each song introduces a character about to make a decision that will change their future: the second before they enter a new world.

“Every time we study musicals, our program introduces a different style,” said Katie Davis, professor of theatre arts and production director. “We’ve performed operettas and shows from the golden age of Broadway, now we are learning about the concept musical. Best-known through Stephen Sondheim’s “CATS” and “Company,” a concept musical focuses on a theme or idea, which completely replaces traditional plot and character at times. “Songs for A New World” presents a real challenge since there is no dialogue other than the lyrics. As we experience the music, our imaginations form the play.”

Dr. Jan Hanson, professor of music, will serve as music director with Rhenada Finch, staff accompanist, in the role of rehearsal accompanist. Performed with a live band, the show will feature a cast and crew of more than 30 USAO students.

In October 2008, New York’s Chernuchin Theatre staged the first professional revival of “Songs for a New World” with a 14-member youth ensemble serving as the orchestra. In 2013, the work premiered in Paris, while London’s St. James Theatre revived it two years later. Encores!, a Tony-honored series dedicated to performing rarely heard American musicals, brought the show back to New York in 2018. Ghostlight Records released a new cast recording of the Encores! production in January 2019.

Brown is best known as the Tony Award-winning composer of the musicals “Parade” and “The Bridges of Madison County.” Born in 1970 in the suburbs of New York City, he began his career as an arranger, conductor and pianist for musicals and in nightclubs around the city.