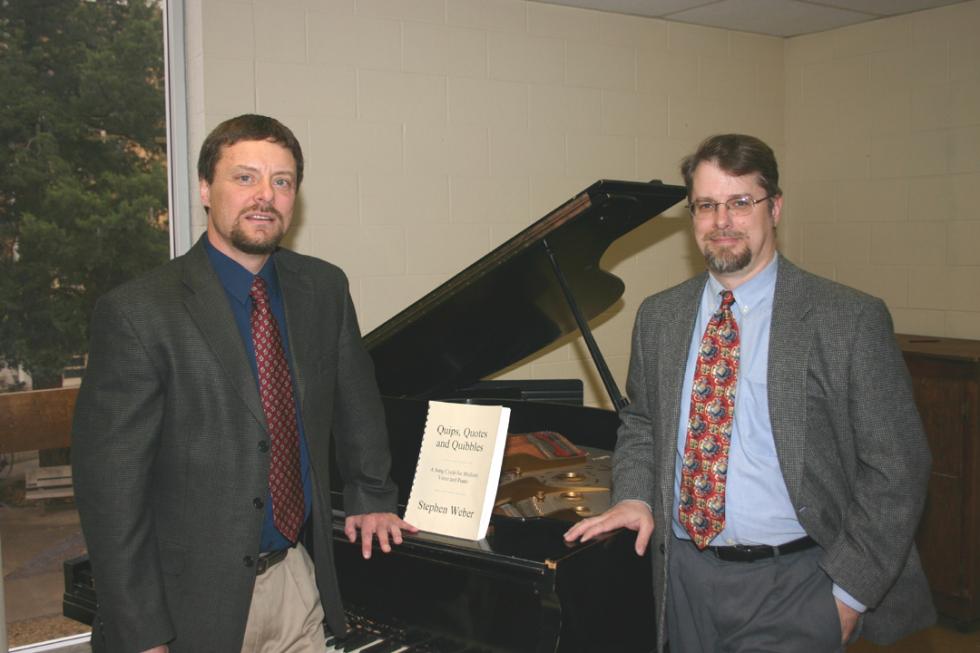 On the subject of writing song melodies, composer Robert Schumann once said, “in order to compose, all you have to do is remember a tune that nobody else has thought of.” For composer and educator Dr. Stephen Weber, the trick was to write songs that incorporated things that other people had already said.

Apparently it worked. Weber was recently invited to perform his original composition, “Quips, Quotes and Quibbles” at the South Central Regional Conference of the College Music Society at Texas State University in San Marcos, Texas. It was the world premier performance of his 18-song cycle.

Weber is in his 11th year as an associate professor of music at the University of Science and Arts.

Joining him was USAO’s Dr. Kenneth Bohannon for the annual conference of more than 150 music professors from Texas, Oklahoma and Arkansas. The USAO professors were invited to perform Weber’s new composition for voice and piano after it was selected for presentation at the conference.

Weber’s cycle of 18 mini-songs are tied together by one common thread: the lyrics utilize quotations by musicians or about music or musicians. For example, early 20th century film composer Arthur Honegger is quoted as saying, “The main thing that the public demands of a composer is that he be dead.” Comedienne Lily Tomlin said this of background music: “I worry that the person who thought up Muzak may be thinking up something else.”

These and many other musical quotes distinguish Weber’s piece as a song cycle, which groups songs together by a central musical theme or idea. During the performance, Bohannon sang while Weber accompanied on piano. Dr. Sunnie Oh, co-chair and organizer for the conference, said the performance was “engaging, refreshing and humorous.”

If he’s lucky, Weber can keep writing such engaging pieces and avoid the pitfall that Igor Stravinsky warned about. The neoclassical composer once said, “Too many pieces of music finish too long before the end.”

Indeed, Bohannon has been asked to perform the song cycle at the Oklahoma National Association of Teachers of Singing conference April 1 at East Central University in Ada.