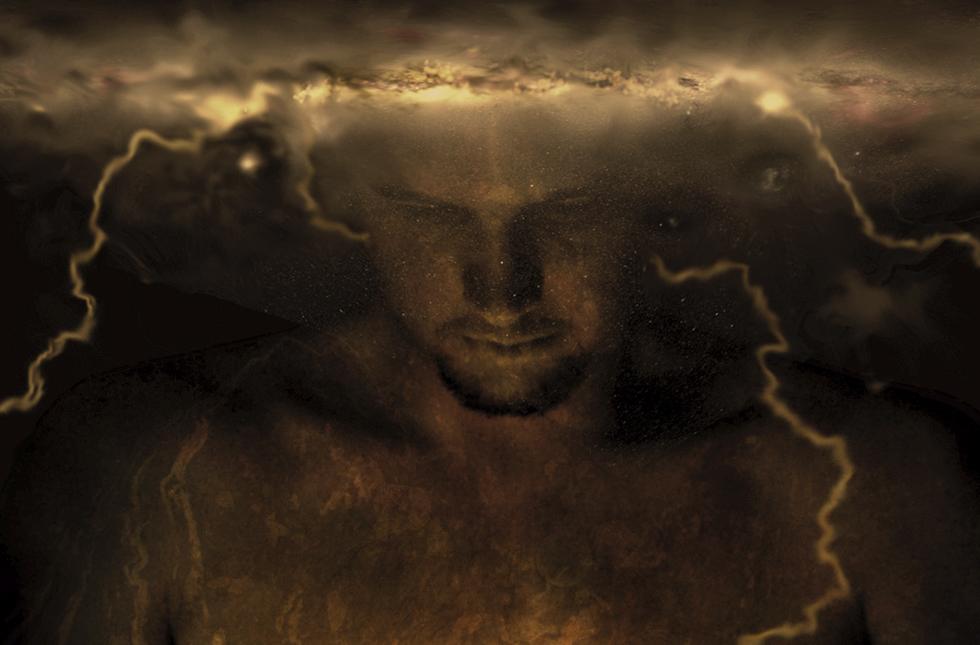 Zeus – Incandescence of the Storm (pictured here) is one of 30 myths and religious figures brought to life through the magic of modern technology in an upcoming show at the Nesbitt Gallery titled From Delphi to Jerusalem. The creators, Rudy Ellis and Natalie Garrison, will be on hand to celebrate the show’s opening with an artists’ reception beginning at 7 p.m. on Saturday. The event is free and open to the public.

For centuries, people engaged with culture through art more than the written word. Stories of gods and men were captured in paintings, sculpture and architecture to transmit eternal messages down through the ages. Though the spread of literacy altered that balance for a time, the urge to represent myths and stories through art has never gone away.

Artists Rudy Ellis and Natalie Garrison have tapped into that ancient impulse by masterfully combining photography, graphic art and digital manipulation into one breathtaking experience.

The show, titled From Delphi to Jerusalem, is scheduled to open with a reception beginning at 7 pm on Saturday at the Nesbitt Gallery at the University of Science and Arts in Chickasha.

The event is free, open to the public and refreshments will be served. Both artists are slated to be in attendance to talk about their work.

From Delphi to Jerusalem features 30 pieces of art that push the technological envelope to bring myths and religious stories to life. Blending backgrounds that have been photographed all over the world with models often shot right here in Oklahoma, Ellis and Garrison then add digital textures and old-fashioned image making to stunning effect.

The collaboration was born out of an artist’s desire to update his approach to his art.

Ellis is a figurative artist with more than 30 years experience working in fine arts, theater and photography.

He is also the curator at the Goddard Art Center in Ardmore, which is where he met Garrison, whom he hired to work as his assistant.

A 2009 graduate of Southeastern Oklahoma State University in graphic design, Garrison was intimately familiar with the techniques of manipulating photographs digitally. Ellis, who had been taking photographs for decades, was eager to learn more about the process.

What began as informal tutorials turned into something more substantial.

The process begins with research about the characters, Ellis explained.

“These mythological figures usually have particular colors, animals or elements that are associated with them,” Ellis said. “So that gives us a place to start building the larger work around the figure.”

Layne Thrift, the Nesbitt Gallery’s director and assistant professor of art, feels that the interdisciplinary nature of the work is the perfect fit for a showing at Oklahoma’s only public liberal arts university.

“I caught glimpses of this series as it developed over time and, as these works began to take on mythical, religious and cultural elements, I knew that it would arouse the curiosity of the gallery audience,” Thrift said.

Garrison sees their collaborative work as being distinct in both its style and process.

“These are not traditional takes on Greek myth,” Garrison said. “We try and bring a realistic style to them but end up blending some unusual materials to get there.”

These unusual materials include photographs from as far afield as Europe, Hawaii and the Pacific Northwest.

“I’m really interested to see how people react to a collaborative show like this as it’s not done that often,” Garrison said.

A section of the show will also be dedicated to sacred images associated with the Christian faith that Ellis assembled working solo.

The show will run through Oct. 5.

The Nesbitt Gallery is open to the public Monday through Friday from 8:30 to 4:30 p.m. It is located on the first floor of Davis Hall.

More information about From Delphi to Jerusalem can be obtained by calling 574-1374 or by visiting usao.edu/gallery online.