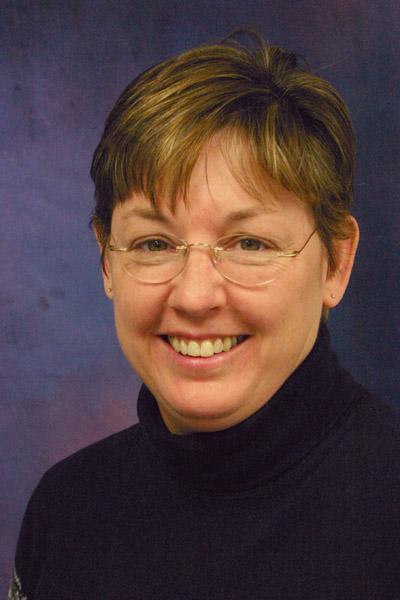 With new technology that makes Nash Library look like the scene of a Mission: Impossible movie, librarian Kelly Brown waves a magic wand to check if all the books are in their right places.

Each book transmits data electronically to anyone holding an instrument called a Digital Library Assistant (DLA).  It’s not a magic wand exactly, but it’s pretty amazing, admits Brown, who describes it like a Pikepass used by travelers on Oklahoma’s interstate highways.

“We scan the barcode of each book and program the tag to read all of the data, including call number, location, etc., associated with that particular book,” Brown explains.” The DLA reads each tag and let’s us know if the book is out of call number order, missing, etc. Think of the DLA in terms of the Pikepass device that beeps at you when you drive by it. That device instantly reads the chip mounted in your car and knows to bill your account.”

“How delightful to improve services, trim costs, and advance our campus technology, all in one project,” said USAO President John Feaver.  “We see this RFID technology as a proven method of raising the bar in Nash Library.  This project was made possible through the leadership of our own Kelly Brown, with support by Melissa Howe and the USAO Foundation.  Students and alumni will reap the benefits.”

How did USAO afford technology this advanced?

“We went after it aggressively,” says Brown.  “The original grant from the McCasland Foundation in Duncan was written last year by Julie Bohannon. This grant was for furniture and collection analysis software. We received $50,000 but achieved the goals for less than $40,000 because we found very competitive pricing. With the $11,000 left over, we asked the McCasland Foundation if we could repurpose the funds for RFID and they agreed. We then purchased an RFID starter kit and have since placed about 13,000 RFID tags into our books.”

Only two other libraries in Oklahoma have employed the 3M technology, says Brown, who expects it to take off in Oklahoma libraries as it saves hundreds of hours for staff.

“When we first started the grant, only the National Severe Storms Lab (NSSL) in Norman had RFID,” Brown says.  “Since then, Oklahoma State University-Okmulgee has added RFID. So far, we are the largest library in Oklahoma to implement the RFID system made by 3M.

When complete, Nash Library will put at least 60,000 items on the tracking system, compared to about 4,000 at NSSL and 15,000 at OSU-Okmulgee. At least two other libraries in the state are implementing similar systems from other vendors.  These include Cameron University and the Pioneer Library System in McClain, Cleveland, and Pottawatomie counties.

Support from the McCasland Foundation is the critical component in the plan, Brown says.

“I was very pleased and grateful that the McCasland Foundation was confident that we would be good stewards of their grant,” she says. “They are a forward-thinking entity that sees the value of this type of technology.”

Better service to students is the goal, Brown says.  “Once all the tags are placed in the books, we will be able to inventory the library in about an hour. Because of our extremely small staff, we have not been able to inventory on a regular basis. With this new system, the inventory process involves uploading our holdings data and then moving a DLA along the shelved books. The DLA will identify missing books and out-of-place books, etc.”

Traditionally, when the online catalog says a book is available, but it can’t be found on the shelves, a search team of library staff and students take hours to seek it out. RFID will trim that to a few minutes.

A practical example of its usefulness is in the children’s book collection, Brown explains. “Children’s books are difficult to manage and keep in order primarily because they are thin and you have to place the call number label on the front of the book rather than the spine of the book. It takes a lot of time to keep it in order. The DLA will allow us to inventory that collection on a more regular basis and serve our patrons better.”

If Brown gets her way, Nash Library will add this technology to the checkout process, where an entire stack of books will be scanned and checked out instantly, instead of staffers handling each individual book with a scanner – “the old fashioned way.”

But that’s another grant down the road.