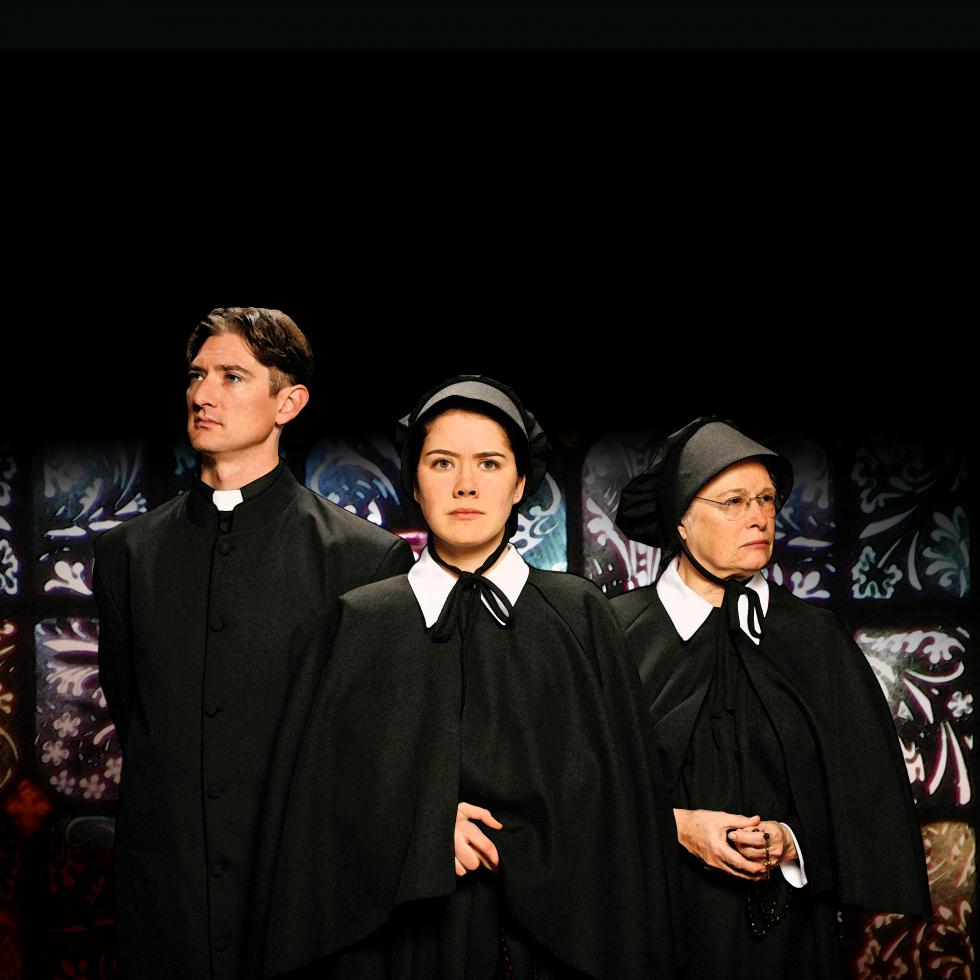 Father Brendan Flynn (left, portrayed by Brendan Shanahan), Sister James (center, portrayed by Caitlin McRae) and Sister Aloysius Beauvier (right, portrayed by Suzy Hunt) form the nexus of Doubt, a play about the power of accusation and the burden of responsibility. The Montana Repertory Theater will stage Doubt as part of the Davis Waldorf Performing Arts Series beginning at 7:30 p.m. on Feb. 27 in Te Ata Memorial Auditorium. Tickets are $12 with discounts for students and seniors and can be purchased by calling (405) 574-1213.

An adult is accused of violating a child’s innocence while hidden behind the veil of authority.

It is a story that is echoed too often in the news whether the alleged perpetrator is a pop star, a religious figure or the coach of a celebrated athletics program. With the urgency of protecting children also comes great responsibility. Once the accusation of such a vile crime is made, it can never be taken back.

When the safety of a child is at stake, is there room for doubt?

The Montana Repertory Theatre is scheduled to stage a production of the Pulitzer Prize winning play Doubt beginning at 7:30 p.m. on Feb. 27 in Te Ata Memorial Auditorium at the University of Science and Arts.

Written by John Patrick Shanley, Doubt addresses these controversial subjects with a thoughtful approach that challenges each member of the audience to draw his or her own conclusion about what happened.

The provocative play is the final performance in the Davis Waldorf Performing Arts Series for the 2011-12 season.

Shanley has had successes with both plays and film. He won an Academy Award for his script to the 1987 film, Moonstruck and went on to write and direct the quirky Joe Vs. The Volcano with Tom Hanks and Meg Ryan.

After its debut in 2004, Doubt enjoyed a long run on Broadway and won the Pulitzer Prize for Drama and the Tony Award for Best Play in 2005.

Shanley built on this success by writing and directing a film adaptation of the play starring Meryl Streep in 2008. The film and its actors were nominated for five Academy awards.

“Doubt has a very timely message and we felt Oklahomans would really benefit from seeing a production of it staged by a company as talented and well-respected as the Montana Repertory Theatre,” said Dr. Ken Bohannon, associate professor of music and coordinator of the Davis Waldorf Performing Arts Series.

“The performance is thought provoking and contemplative with spellbinding dramatic action. I can’t imagine anyone coming away from this play unchanged by what they’ve seen,” Bohannon said.

The Montana Repertory Theatre is one of the oldest touring companies in the United States. Founded in 1968, the company serves a mission of providing professional-grade theater to underserved areas at an affordable cost.

The cast of Doubt features two professional actors and two student actors from the University of Montana.

The Montana Repertory Theatre serves as the theater-in-residence for the University of Montana and offers UM students a unique opportunity to gain professional experience while pursuing their undergraduate degree.

The company will be hosting a workshop with USAO drama students the day of the performance. Audience members are encouraged to stay after the play and participate in a question and answer session with the cast and crew.

DWPAS is produced by the USAO Foundation in conjunction with the Oklahoma Arts Council, the National Endowment for the Arts, the Kirkpatrick Family Fund and the Chickasha Public School Foundation as well as generous support from local businesses including the Chickasha Bank and Trust Company, Standley Systems, The First National Bank and Trust, Crazy 8 Café and KOOL 105.5 Radio.

To purchase tickets, interested parties can call (405) 574-1213 to place a credit card order over the phone or go to the business office located on the second floor of Troutt Hall at USAO.