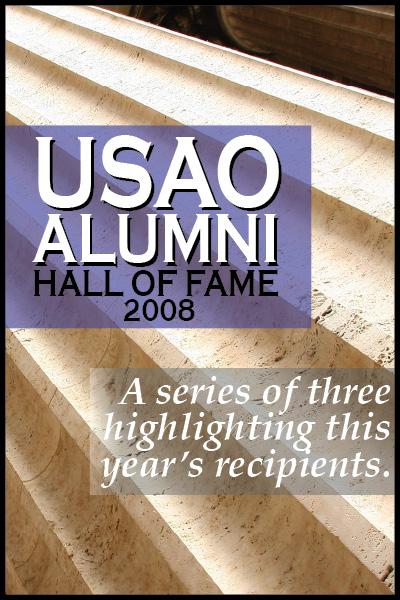 Oklahoma College of Liberal Arts alumnae Bill and Carol Wallace are being honored at USAO Nov. 8 as part of the annual USAO Alumni Homecoming festivities. The Wallaces are nationally recognized authors and speakers.

Note: This is the first of a three-part series on the distinguished individuals who will be honored by the USAO Alumni Association at this year's Annual Homecoming on Nov. 7-9.

CHICKASHA – Chickasha children’s authors Bill and Carol Wallace will add one more honor to their already long list as the couple are inducted into the USAO Alumni Hall of Fame during Alumni Homecoming at the University of Science and Arts of Oklahoma Nov. 7-9.

The nationally recognized authors will be honored along with two other inductees during the Nov. 8 ceremony. Registrations still are being accepted for all USAO alumni at the USAO Alumni Development office, (405) 574-1290. Registration packages for the entire weekend begin at $40 per person with an all-inclusive package for $50 per person, which includes all meals.

“I have known Bill and Carol for many years. They are prolific writers and staunch supports of USAO – often coming to talk to classes and groups as well as donating many autographed books each year for Books for Tots,” said Dr. Jeanne Mather, professor of education at USAO, in her nomination letter. “They are leaders in the literacy movement and, in conjunction with the Grady County Reading Council, they go out of their way to promote giving children opportunities to develop a love of reading.”

Bill and Carol Wallace both graduated from the Oklahoma College of Liberal Arts in the early 1970s. Carol Priddle Wallace graduated in 1970 and Bill Wallace in 1971 – both with Elementary Education degrees. They received their master’s degrees from Southwestern Oklahoma State University in 1974. Carol received her master’s degree in Elementary Education while Bill’s degree is in Elementary Administration. Bill also studied professional writing with William Foster-Harris and Dwight V. Swain at the University of Oklahoma.

Longtime Chickasha residents, the Wallaces taught children in the area for many years. Bill taught fourth grade, kindergarten, served as assistant principal at the Chickasha Ninth Grade Center and was the principal and physical education teacher at West Elementary. Carol worked as a second grade teacher at Southwest and Grand Elementary Schools in Chickasha.

Bill’s first book to be published, A Dog Called Kitty, was written during his days as a fourth grade teacher in Chickasha. The book won the Oklahoma Sequoyah Award, the Texas Bluebonnet Award and the Nebraska Golden Sower Award.

“I began writing to keep my fourth graders quiet after lunch recess. When they listened to the stories and behaved, I kept writing. The kids also talked me into finding someone to make “real” books out of the manuscripts. Danger on Panther Peak was the first book I wrote, but the third published. A Dog Called Kitty was the third book I wrote after Trapped in Death Cave, but it was the first to be published,” Bill said.

In 2000, he received the Arrell M. Gibson Lifetime Achievement Award from the Oklahoma Center for the Book. He authored nearly a dozen more books that won awards from Oklahoma, Utah, South Carolina, Florida, Kansas, Wyoming, Maryland, Connecticut, Arizona and Canada.

In recognition of Bill Wallace’s contributions to education, the Chickasha Public Schools changed the name of West Elementary School to the Bill Wallace Early Childhood Center in honor of him.

Carol has co-authored books with Bill and is an award winning author for her books for younger children that include One Nosy Pup and Turkeys Together. The two books are Holiday House Publications and considered “easy readers” for grades one and two. Her newest easy readers include Easter Bunny Blues and The Santa Secret.

“After teaching second grade for 26 years, I felt I needed a change. I came home to clean closets and do all those things around the house that I always needed to do, but never had the time. Cleaning closets got old very fast, so I ended up watching a lot of television. One day I rushed into Bill’s office all excited to tell him that someone had fallen down on one of the game shows I was watching. We both decided I really needed something to do.

“I came up with the idea for our first book, The Flying Flea, Callie and Me, from watching our cat and his irritation with the local mockingbirds. Bill helped me outline the story and I did the writing. Then we both sat down and revised the story together. That Furball Puppy and Me was our second book and was inspired by our cat and dog,” Carol said.

Since retirement, the Wallaces continue writing and speaking at schools and conferences throughout America. The couple has three children and five grandchildren.