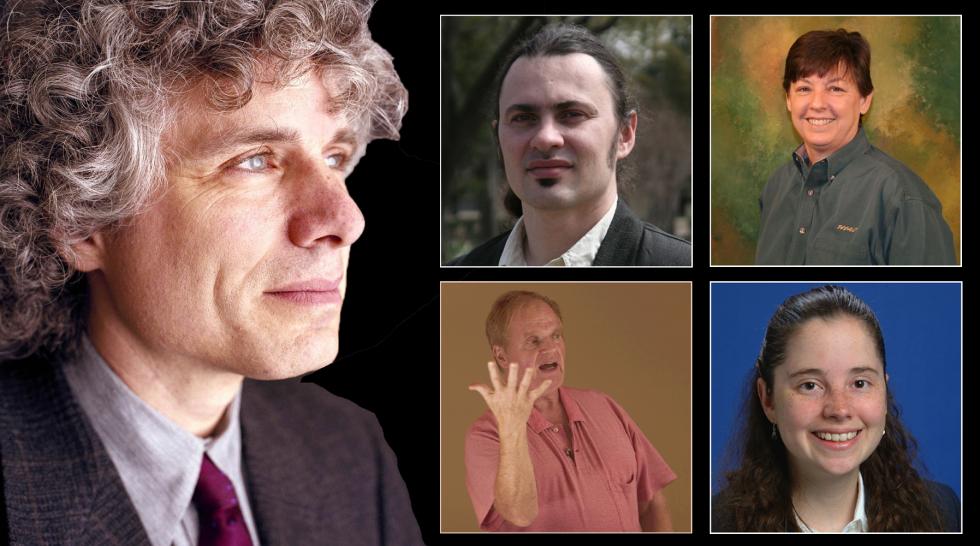 A collection of respected researchers and authors will convene on the campus of the University of Science and Arts to discuss the nature and functions of the mind during the Emerson-Wier Liberal Arts Symposium April 8.

The panel discussion is scheduled from 2-4 p.m. in the Davis Hall Amphitheater on the USAO campus. In addition to the panel discussion, the symposium will feature an evening presentation by experimental psychologist Steven Pinker at 7:30 p.m. in Te Ata Memorial Auditorium.

Dr. Haj Ross is interested in poetics and semantax. He received his doctoral degree in linguistics from the Massachusetts Institute of Technology, a master’s from the University of Pennsylvania and a bachelor’s degree from Yale University.

Ross has completed research in linguistics in syntax, semantics, pragmatics, morphology, phonology and phonetic symbolism. He values interdisciplinarity, especially the link between poetics and linguistics, and emphasizes the “liveness” of language in his research and his teaching.

Dr. Steven Pinker is an experimental psychologist interested in all aspects of language and mind. Much of his initial research was in visual cognition -- the ability to imagine shapes, recognize faces and objects, and direct attention within the visual field. But beginning in graduate school he cultivated an interest in language, particularly language development in children, and this topic eventually took over his research activities.

Known for his wit and profound ideas, many of them explained by referencing pop culture, Pinker is recognized as an accessible academic, helping non-specialists understand the science behind human thought and action.

Serving as moderator for the panel discussion is Kelly Brown, director of Nash Library.

Both the panel discussion and the evening lecture are free and open to the public.

Experimental Psychologist Steven Pinker (left) is joined by Dr. Justin Fisher (middle top), Dr. Haj Ross (bottom middle) and Dr. Amy McGovern (bottom left) for a panel discussion during the Emerson-Wier Liberal Arts Symposium April 8 from 2-4 p.m. in the Davis Hall Amphitheater on the USAO campus. Pinker will present an evening lecture at 7:30 p.m. in Te Ata Memorial Auditorium. Both events are free and open to the public. Moderator for the panel is Kelly Brown, director of Nash Library (right top).